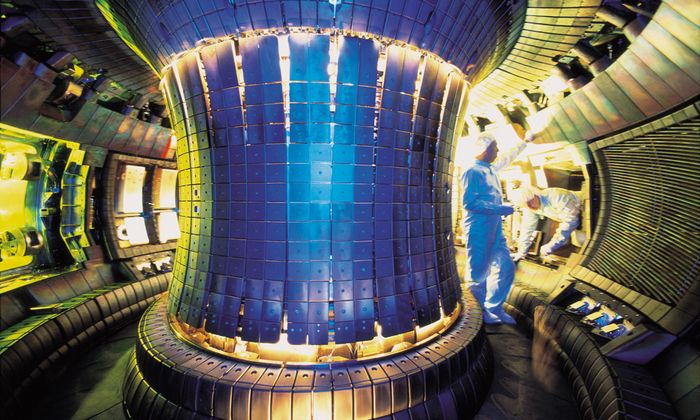 Bringing the Sun to Earth - that's what research at the Max Planck Institut for Plasma Physics (IPP) in Garching und Greifswald is all about. But only, figuratively speaking, of course. The scientists' real goal is to copy on Earth how the Sun produces its energy.

The Sun uses nuclear fusion, i.e. the fusion of light atomic nuclei, to produce the unbelievably large amount of energy that it needs. Physicists have known and understood this process for many years. Scientists have already succeeded making a fusion fire glow on Earth, although they have not yet advanced so far for it to burn independently in a power plant. Around the middle of the century - so researchers hope - fusion could become a source of energy for people on Earth.

What will happen in such a fusion power station of the future? The fuel mix of deuterium and tritium needs to be heated to a temperature in excess of 100 million Celsius. A magnetic field serves to contain the fuel in a cage, as it were, to ensure that the hot, extremely thin gas - a plasma - does not immediately cool down again by coming into contact with the walls of the plasma container. The two leading design concepts for this magnetic containment of the fusion plasma are called tokamak and stellarator. The IPP is examining their suitability for use in a power station.

The IPP operates the tokamak ASDEX Upgrade in Garching, the largest German fusion experiment. The stellarator WENDELSTEIN 7-X is being built at the IPP branch institute in Greifswald, opened in 1994.

The future of nuclear fusion research is called ITER

The IPP has 1100 staff and is an associated member of the Helmholtz Association. The work of the IPP is embedded in national and European programmes as well as in worldwide cooperation projects. At European level, the IPP is currently involved in the world's largest fusion experiment: JET (Joint European Torus). At the same time, it is actively helping to prepare the next major step in fusion research, namely worldwide cooperation in the International Experimental Reactor ITER.