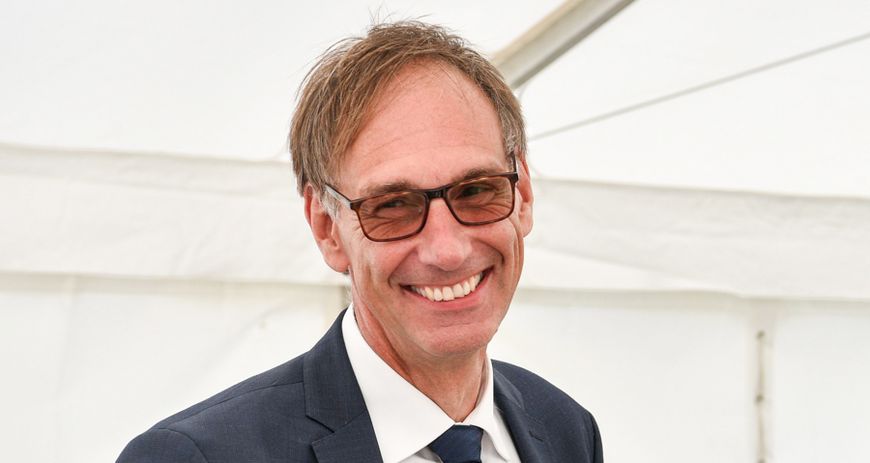 At DLR in Cologne, Robert Pitz-Paal is researching a technology that is highly efficient but widely unknown: He is improving solar thermal power plants that can play a crucial role in the energy transition. Central to this is international cooperation.

The 35-degree heat must have been oppressive back then on his summer vacation in Andalusia, but student Robert Pitz-Paal didn't want to miss the trip by hitchhiking: He drove to a solar thermal power plant, after all, his doctoral thesis, which was soon to begin, was to revolve entirely around this topic. "1989 was that vacation," Robert Pitz-Paal says today and laughs, "we finally arrived at the power plant on Friday afternoon, completely sweaty, and there was almost no one there anymore. 'Just come back on Monday,' they told us."

Even then, at the first contact with his research topic, the physicist had to be persistent. But he also experienced firsthand how inspiring a visit to a solar thermal power plant can be: Even from a distance, acres of mirrors can be seen glinting in the sun; looking at the details, there is a lot of high-tech in the plant. Today, Robert Pitz-Paal uses this impressive effect when he wants to get visitors excited about solar thermal energy. At the German Aerospace Center (DLR) in Cologne, he heads the Institute for Solar Research, where 150 employees conduct research into the optimal use of solar energy. But one thing still troubles him: "Solar thermal power plants have been around as long as photovoltaics - but even so, we still have to explain outside expert circles what we're actually working on."

In fact, CSP technology, as experts call it (an acronym for concentrated solar power), is surprisingly unknown in Germany - "which is probably also due to the fact that it cannot be operated economically under Central European conditions," Robert Pitz-Paal suspects. But in California, Spain and Morocco, for example, these power plants have been in use for a long time. "In principle, solar power plants work like conventional power plants," the researcher explains - with the difference that they use solar energy instead of fossil fuels to generate high temperatures for the power plant. Mirrors focus the sunlight and reflect it to a so-called heat receiver, in which a special thermal oil or liquid salt circulates that can absorb temperatures of up to 560 degrees. The power plant then uses this heat to generate steam, which drives a generator to produce electricity via a turbine. The detour via heat is the great advantage of this technology: Unlike the electricity in a photovoltaic system, the heat can be stored and thus called up at night, for example - the hot liquid is comparatively easy to store. The technology can therefore play a key role in the energy transition; it also makes electricity available at times when coal-fired power plants have often had to step in. In a well-developed European interconnected grid, demand in Germany could even be covered by such power plants from Spain in the future.

International collaborations are particularly important in solar thermal research - and not just because the technology is not used in Germany. Robert Pitz-Paal was involved in large networks at an early stage: In the EU project HYDROSOL, for example, his institute was one of the four project partners, and he himself has been chairman of the executive committee of the International Energy Agency's (IEA) "Solar Power and Chemical Energy Systems (SolarPACES)" network since 2017. "Collaboration in Europe, and with Spain in particular, has always been of particular importance," says Pitz-Paal: "The experimental power plant in Andalusia, which I visited as a student, is the perfect example of European collaboration: German and Spanish researchers are working together there to reduce the cost of the technologies." Other European countries are now involved; 2003 saw the creation of the European "Sollab," an association of European research institutions that focus, for example, on the joint training of young scientists and the exchange of researchers. This base helped bring the first commercial power plants on line in Spain in 2007.

"I've made a career out of not giving up my subject easily."

When Pitz-Paal delved into the topic for his doctoral thesis, it was actually the worst possible time to do so. "At that time, the first commercial plant of this kind had just gone bankrupt in California," he says in retrospect. It began the phase often referred to among his colleagues as solar winter: In the years up to about 2003, solar energy was a largely uninteresting topic. The oil price shock of the 1970s, which had first given the topic momentum, had long been forgotten, the threat of climate change meant something only to insiders, and solar technology bobbed along. In Germany, it was the red-green federal government that brought the topic back into focus and then, soon after, the increasingly visible climate changes. "Some researchers make a career out of focusing on a hot topic," says Robert Pitz-Paal, shrugging his shoulders, "but in my case it was different. I made a career out of not giving up on my topic easily."

When he began his studies, the various techniques of energy generation were seen as mutual competitors - either photovoltaics would prevail or the solar thermal approach, was a widely held belief. Today, we know that combinations are necessary to achieve the energy turnaround and thus protect the climate: the mix of decentralized plants and large power plants on the one hand, and photovoltaics and solar thermal on the other. One thing is certain: Both technologies were still in their infancy at the time, especially in terms of efficiency. "We often say 'from powerpoint to powerplant,'" says Robert Pitz-Paal: "The product cycle from the first concept to the finished power plant has been amazingly short over all these years, and the progress has been tremendous. Back then, the solar energy generated cost around one mark per kilowatt hour; today, modern solar thermal power plants make it for around seven cents per kilowatt hour, making them competitive with natural gas power plants.

Time to sit back? No way, says Pitz-Paal, and ambition is itching to get started: new types of heat transfer fluids - that's the name of the liquid that is heated to enormous temperatures by the mirrors - could be heated even higher and thus significantly increase the efficiency of the power plants. That is one of the most important goals he is currently working on with his colleagues from the Institute for Solar Research.

He himself, however, doesn't like it that hot. "The Mediterranean is great and my wife and I like to be there," he says, "but more in the fall and winter. In summer, we're mostly on the bike paths along the rivers in Germany, on the Danube or the Inn, for example." Nevertheless, he has not regretted the fact that he was in the sweltering heat of Andalusia at the time, shortly before writing his doctoral thesis, to take a first look at the solar thermal plant there. If only because his wife was there. Robert Pitz-Paal smiles: "She was able to take a look at what I have been working on all the years since!