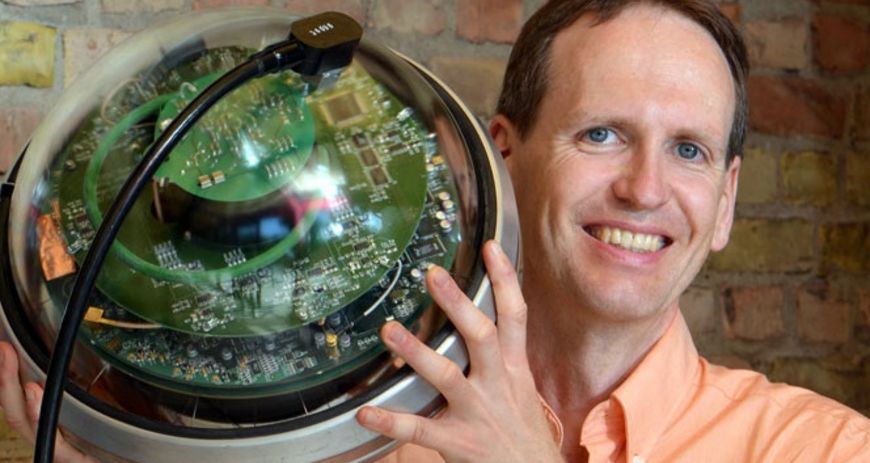 Alexander Kappes knows: what he wants to say now does not sound very positive. But then he says it after all. "Studying physics means a continuous increase of the frustration threshold", says the astrophysicist. What does not imply that such a study cannot be fun, he quickly adds. "One learns to have patience. And even not finding what one is looking for means increase of knowledge. This is how science works."

It is good that Kappes studied physics, for a flexible frustration threshold is necessary in what he and his colleagues at the Deutsches Elektronen-Synchrotron DESY research. They are part of an international research team intending to find high-energy cosmic neutrinos – tiny particles from faraway galaxies, which might help in answering one of the most important questions of astrophysics: Where does cosmic radiation come from?

Incessantly, Earth is showered by particles from outer space. Heavy, charged particles, such as protons and helium nuclei, are mostly absorbed by the atmosphere. Not so neutrinos, which permanently hit the Earth's surface in great numbers. They do not carry an electric charge and therefore only rarely react with other particles, usually penetrating matter unimpeded. They thus remain almost untouched during their journey through space. This makes them ideal cosmic messengers: with their characteristics, they transmit information regarding their source of origin.

Yet one neutrino is not like the other. There are low-energy neutrinos, emitted, for example, by the Sun, which is only eight light minutes distance from Earth. These neutrinos are omnipresent. The neutrinos Alexander Kappes and his colleagues are after, however, are extremely rare. "We are looking for high-energy neutrinos, because we can be fairly sure that they have travelled a great distance", says the researcher. But even though neutrinos permanently pass through us in great numbers, they can be traced and differentiated only indirectly and at great effort. Three years ago, the scientists completed a huge neutrino telescope at the South Pole: IceCube. The hexagonal facility has an edge length of one kilometer and is set deeply into the ice. "We use the Earth as a filter", explains Kappes. In this case, only those particles are detected, which penetrate to the South Pole telescope from the other side of the Earth, that is, only neutrinos.

A lot of effort for insights, which at first glance have only little to do with our everyday reality. What drives Kappes? "Well, humans wants to know what our world is made of and what happens outside their daily range of experiences", he says. With regards to neutrinos, Kappes and his colleagues hope to find out more about the events that sent these particles on their long journey. "For instance, through optical telescopes we observe stars exploding and the high-energy cosmic neutrinos could tell us more about these events", explains Kappes. It is also a journey into the past, since neutrinos from other galaxies may have travelled many million light years before hitting the Earth.

Kappes has travelled to the South Pole already once before. An impressive journey. "The offices at the international research facility are not much different from those at any given university. But looking outside through one of the windows, one sees a forbidding, endless ice desert, thousands of kilometres from any civilisation."

However, daily work routine for Kappes and his colleagues takes place in Zeuthen near Berlin. This is where the data is analysed, which the telescope has yielded since 2010. Now, the researchers may have scored a big break. They are not yet fully sure; the final statistical evidence that the captured neutrinos are not from within our solar system remains as yet open. Of more than hundred thousand neutrinos the scientists have traced over the course of the past years, two at least have such high energy that they are very likely to derive from faraway cosmic sources.

So patience seems to be rewarded for Alexander Kappes, who turned his greatest hobby, physics, into a profession. Yet he takes time also for other arts: since 25 years ago, he plays the clarinet in various Berlin orchestras. The spectrum ranges from Wagner to the film score of "Back to the Future". "The nice thing about playing the clarinet in an orchestra is that I as an individual can contribute to creating a wonderful sound", says Kappes. "This is much the same as in science."