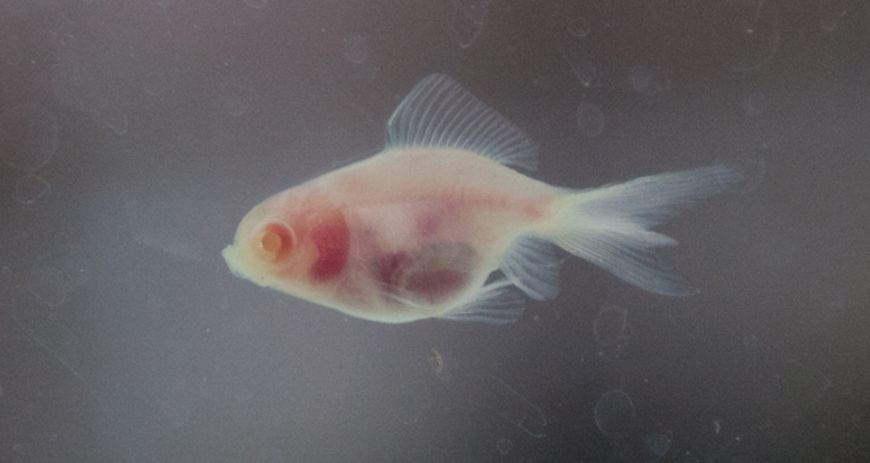 <b>Living Artwork</b> The Design-Fish is part of the work “Sterile” by the artists Revital Cohen and Tuur Van Balen, which can be viewed in the context of the exhibit “assemble | standard | minimal“ until 3 May 2015 in the project room at the Schering Stiftung, Unter den Linden 32-34, 10117 Berlin.

The art of research

Research scientists and artists have more in common than one would think at first glance; they are both concerned with the big issues of life – each in his own way. When they work together, it leads to amazing results.

This work of art is moving – it is quite lively. Three pale fish are swimming in simple glass containers, each separately exhibited in dazzling light. These specially-bred albino goldfish can currently be viewed in the project room of the Schering Stiftung in Berlin. The Japanese scientist Etsuro Yamaha injected so-called morpholinos into the embryos. This substance suppresses the genes that are responsible for the formation of the reproductive organs

For Etsuro Yamaha, work with such modified fish is simply part of the daily research routine. Conversely, for the London artist pair Revital Cohen and Tuur Van Balen, these fish are treasures that they display as objects under the title “Sterile”, thus classifying the three goldfish as cultural-historical “works”. How far can and should mankind interfere with life itself – this question is the main focus here. The total came to 45 sterile fish that Yamaha produced on commission for the artists, comparable perhaps to a limited number of graphic reproductions.

It is the big topics in life that both artists and scientists, equally, are concerned with – each in his own way: life’s building blocks, the human body, nature, the vastness of the universe, emotions such as love, desire or hate. Scientists seek to perceive the world objectively and to submit factual reports based on their research, while artists reflect subjectively on the world and address the viewer through aesthetic means. The goal however, says Heike Catherina Mertens, is similar; artists as well as scientists have stepped up in order to comprehend, to design, to expand horizons and to cross borders. Mertens is the chairperson for the Department ‘Culture’ at the Schering Stiftung. She is trying to make the case  for a consolidation of the disciplines: “Only in dialogue between culture and science, only when we collaborate in our thinking processes – which had always been the approach from classic antiquity to the Renaissance – can we enjoy the holistic experience of our society. The Schering Stiftung wants to promote such a dialogue. This is why they are supporting artists who are tackling scientific issues – such as Revital Cohen and Tuur van Balen. Parallel to this, the foundation is promoting interdisciplinary symposiums and workshops.

There has always been a special attraction between art and science, and sometimes these polarities are even unified in one person – the natural scientists Maria Sibylla Merian und Alexander von Humboldt, for example, created impressive paintings. Nowadays, this relationship has achieved another quality. From time to time artists turn to scientists – they make use of similar methods as well in that they conduct research, experiment and evaluate data. Conversely, visualisation is becoming increasingly important in science; this is a trend that involves increasingly complex interconnections. And there is one more thing that modern science and the visual arts have in common – they are both presently experiencing huge public interest.

A spectacular exhibit at the Bundeskunsthalle, which recently finished, brought the two worlds together: “Outer Space. Fascination with Space” was the name of the show in which the German Aerospace Center (Deutsche Zentrum für Luft- und Raumfahrt - DLR) participated. The scientists advised the curators in terms of content. At the same show, the DLR made a series of exhibits available, such as a model of the supersonic aircraft SpaceLiner and a pinch of moon dust from the Soviet Luna 24 mission.

The vastness of the universe is a rewarding topic for dialogue between art and science, says Andreas Schütz, press officer for the DLR. Fascination regarding the beauty of outer space, one’s own minuteness, and the abundance of the unknown drive both scientists as well as artists to reflect upon fundamental issues: How did the universe come into existence? Have other life forms emerged somewhere else? And is there another intelligent civilisation somewhere? I find it interesting, adds Schütz, that collaborations such as this one with the Bundeskunsthalle also retroact on our own center. “The employees here are proud whenever the name of our center is mentioned, for example, in Frank Schätzing’s new novel, or the center logo appears at the Bundeskunsthalle.” In other words, their studies are experiencing a whole new form of attention and appreciation.

This collaboration with artists is nothing new for the aerospace research scientists. “We are basically open-minded,” says Andreas Schütz. “Many tremendous, unique projects are brought to us.” For example, important scenes from the film “Baikonur” were shot on board a DLR aircraft, in parabolic flight, so that the actors would move weightless in front of the camera.

But some concepts and works of art are met with shoulder shrugs by the DLR employees, causing the two worlds to clash. Artists are, after all, free spirits, opines Schütz with a smirk. For the exhibition “Outer Space”, they were requested to transport into space a bee from the beehive on the roof of the Bundeskunsthalle. Accompanied by the astronaut Alexander Gerst, this “Federal Bee”, preserved in synthetic resin, went on board the ISS in May 2014. But of course, it wasn’t as simple as the curators had imagined; the bee had to first undergo an intensive security screening since this is required in space travel.

However, the basic dilemma is something else; it is simply not a component of the research facility’s scope of duties to promote art projects. “For us in the communications department, our involvement with art can unfortunately only be a sideline. We don’t have enough time for this and, to tell the truth, not enough money either”, says Andreas Schütz. He adds that when collaboration is actually successful, there is frequently a lot of personal dedication behind it that stems from the participants – a healthy dose of idealism – and sometimes it’s only possible because bureaucratic hurdles have been circumnavigated.

The Alfred Wegener Institute, Helmholtz Centre for Polar and Marine Research (AWI), in Bremerhaven, has, for this reason, found an institutionalised form of collaboration with artists. Most recently, the AWI researchers have been swamped with requests. The artists perceive themselves as a kind of seismographer for societal development – which explains the high level of interest in the AWI. And the consequences of technical progress, particularly man-made climate change and the associated alterations to our planet, hence came into the spotlight. This is one of the core topics of the Bremerhaven researchers.

In order to do justice to the high level of interest, the AWI collaborated with the Hanse- Wissenschaftskolleg in Delmenhorst. Once annually, a call for proposals and a transparent competition take place whereby artists submit an application with a concept and receive a scholarship if they are selected. They can thus work with scientists and take part in an expedition, for example. This kind of collaboration is a huge success for AWI, says project supervisor Kinga Jarzynka: “Art conveys knowledge differently than the classic technical discussions. And we are thus able to develop new target groups for our research.”

One of the scholarship recipients from 2014-2015 consciously played with the idea that science typically takes place behind closed doors. In his video installation “day by day”, Rolf Giegold mirrors the living and working conditions for scientists at what is probably the coldest workplace in the world – the Neumayer Station III in the Antarctic. He conveys to the viewer a feeling of the inhospitality of the place. The exhibit will open at the Bremerhaven Chamber of Labour on April 29.

In the latest projects, increasingly it is not only the research targets that become objects for the artists; rather, it is the scientist himself who becomes the object of interest. The artists ask questions regarding their work routine and methods. Similar to the way that the artist pair Revital Cohen and Tuur Van Balen displayed the albino goldfish, they observed the embryologist Etsuro Yamaha conducting his research, meticulously studying his hand movements. From their observations, they subsequently constructed a machine that could eventually replace Yamaha – like an assembly line, it is able to produce sterile fish from egg cells and sperm. A robot that creates life. For the time being though, it’s on standby.