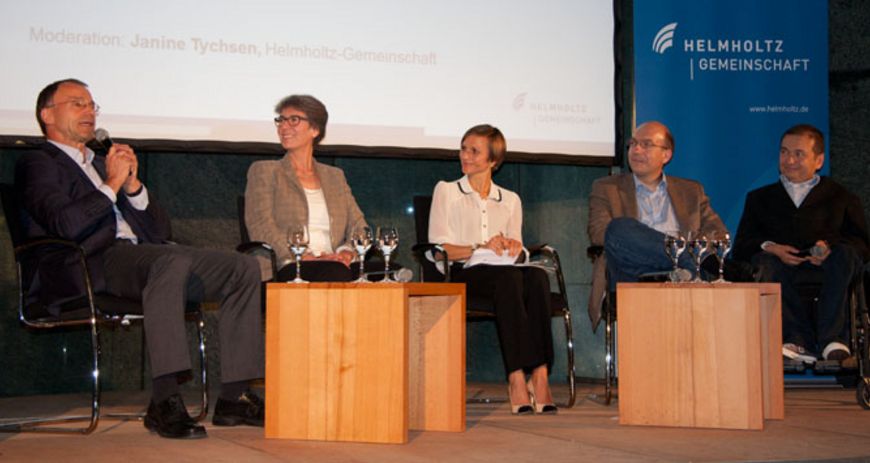 Free will – only an illusion?

Brain researchers, philosophers and computer experts are on the search for the core of the self. Who or what guides our thoughts and actions? We ourselves, our free will? Or are our behaviour and thought determined by complex chemical processes in our brain? In Berlin, scientists searched for answers

Who or what guides our thoughts and actions? Does our free will decide whether we get up in the morning or turn over to snooze a little longer? Or is our behaviour controlled by neurobiological processes in our brain? The questions that were explored in this latest issue of the "Fokus@Helmholtz" discussion series have been on-going topics of scientific debate the latest since brain research has increasingly called into question the philosophical construct of the autonomous self. At the same time, these are questions occupying also the minds of people outside the world of academia as they touch on the very basis of our existence.

The controversial subject was discussed by an interdisciplinary panel representing the natural sciences, the humanities and law. Reinhard Merkel, Professor of Criminal Law and Philosophy of Law at Universität Hamburg and a member of Leopoldina - German National Academy of Sciences, launched into the discussion by expressing his doubts regarding the notion of free will. Instead, he views our brain as "a physical system subject to the laws of nature". However, this determinism, that is, the predestination of events and actions, by no means removes people's responsibility for their actions. Every human being can be addressed "in a normative manner" and is therefore capable of observing the rules of social coexistence. This means that offenders are criminally liable, even though biochemical processes in their brain were the motivating forces behind their actions.

Onur Güntürkün, Professor of Biopsychology at Ruhr-Universität and likewise a member of Leopoldina, remained sceptical in face of these lines of thought. "How does science know that our actions are predetermined?", he asked and cast a light at the many as yet unsolved riddles of brain research. For instance, what about the uncertainty whether chance might not play a role in neuronal interaction after all. Markus Diesmann, Head of the Institute of Neuroscience and Medicine at Forschungszentrum Jülich, a member centre of the Helmholtz Association, spoke about a "deterministic chaos" in this context. By this he means a system that follows internal laws, yet whose behaviour eludes precise prediction. The reasons for this are small disruptions within the system that can trigger unexpected changes. Diesmann derives his findings from the mathematical model he used to recreate one cubic millimetre of brain tissue, with a capacity of about 100,000 nerve cells. Yet this simulation represents only a tiny fraction of the approximately 100 billion nerve cells that form the human brain. The ratio illustrates the difficulty brain researchers have in substantiating their hypotheses.

Science journalist Manuela Lenzen, another panellist, is not surprised that the question of the conditions of our thought meets with broad interest. This issue, she said, is "central to our self-conception. We are forced to have an opinion about this". At the same time one must not forget the considerable degree of influence of the cultural environment on our brain – a phenomenon that was ultimately highlighted by biopsychologist Güntürkün. The form of society we live in – be it individualistic as in the West or collectivistic as in the Far East – has an effect on cognitive processes. Hence a human being remains a social creature also in the world of brain research.