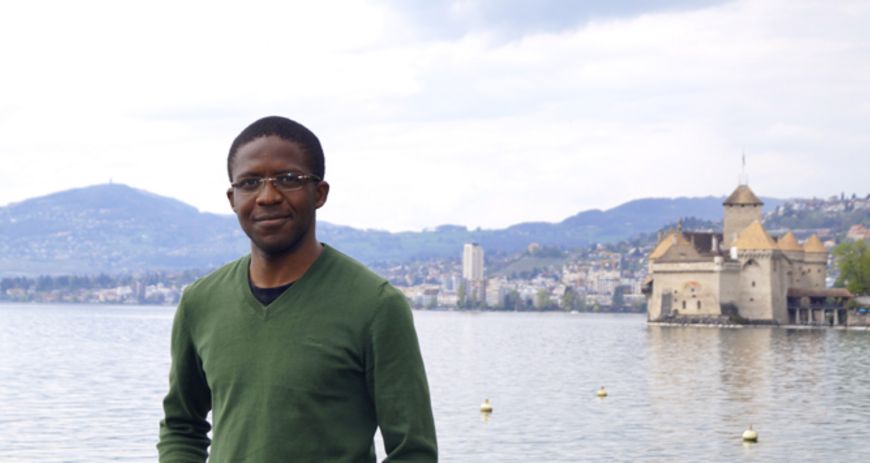 ”In Germany it’s possible to accomplish just about anything”

His research saves lives: Ulrich Kemloh from Cameroon is examining the complex flow of people at large events. Having to learn the German language seemed to him to be a small price to pay for obtaining first-rate training almost free of charge.

“It is good to know that your own research is saving lives”, says Ulrich Kemloh. The man from Cameroon is actually named Armel Ulrich Kemloh Wagoum.
In Germany however he has taken on, for the sake of simplicity, a short version of his name. But in terms of his career, by no means does he shy away from complexity; he works on computer simulations, with which the movements of large groups of people can be predicted. “Motivated by an ever-increasing quantity of attendees at large events and the increasing complexity of airports, train stations or stadiums, we want to understand the complex dynamic of pedestrian flows and increase human safety”, says Kemloh, who works in the division Civil Security and Traffic at the Jülich Supercomputing Centre.

In order to test their models, he and his colleagues assembled 2000 people in an exhibition hall in Düsseldorf (read more about this in HELMHOLTZ extreme – The Largest Pedestrian Experiment in the World). Research scientists there funnelled the test subjects around barriers and into claustrophobic and confined rooms, and observed what patterns govern their movements. Observed by cameras, QR codes on the hats of test subjects enabled recording of individual movement profiles. The results from the study flow into software that is free-of-charge worldwide, freely accessible to all, and is intended to provide more safety at large events and rescue operations; also to make sure that disasters such as the Loveparade in Duisburg in 2010 are not repeated.

Kemloh’s home is the city of Mbouda in Cameroon. From there he moved to Hamburg in order to study Computer Engineering. But first he had to take a five-month German course in order to get a visa. “Having to learn the German language was the only big price I had to pay for first-rate training here. I didn’t let the opportunity slip by”, Kemloh remembers.

“And luckily, mathematical formulas look almost the same in different languages. So there were no big problems in the lectures.” Kemloh quickly made contact with German classmates and got useful tips from other students from Africa. “The International Office was always helpful with good advice. Since I was financially independent and my study programme was progressing quite well, there was never any problem with the residence permit. Unfortunately, I know of completely different stories from the Immigration Authority.” Kemloh received his doctorate at the Forschungszentrum Jülich and the Bergische Universität in Wuppertal. His doctoral thesis was awarded by the Research Centre with the Prize for Excellent Science.

He still likes working and living in Germany today. “For me, the trip to Germany signifies a new beginning, and such a beginning is always difficult. But I was always given good support by a few professors, who for example recommended me for scholarships.” Kemloh feels comfortable in the small town of Jülich – and he likes to travel often to conventions or conferences in neighbouring European countries. He is also quite satisfied with German cuisine: “I find it really interesting that I can always enjoy drinking a local beer, no matter in what village or in what pub I happen to be.” In his leisure time, he is busy with his club “Koegni eHealth”, which is working to equip hospitals in Cameroon with a system for an electronic patient file.

In response to the question about his most important impression of Germany, Ulrich Kemloh answered explicitly: “The thing that amazes me here is the fact that, with effort and hard work, you can really accomplish just about anything that you want, no matter what your background is. People can argue about this, but this is my point of view.”

This article is part of a series in which we introduce foreign research scientists, who work at a Helmholtz Centre. You can find an overview of all articles here