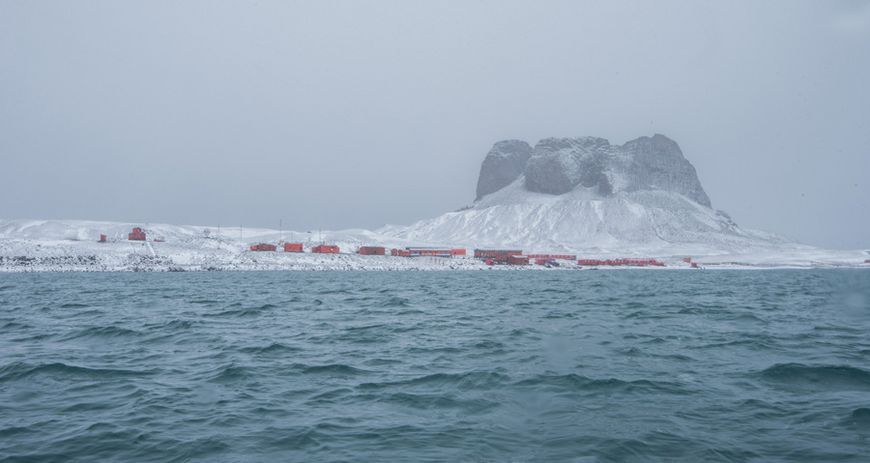 The Argentine Carlini Station, including the associated Dallmann Laboratory, is located in Potter Cove on the South Shetland Islands archipelago of Antarctica. (Photo: Anders Torstensson)

“We can see, hear, and feel climate change”

It can take Doris Abele up to two weeks to reach her workplace – the Carlini Polar Research Station. Here, at the northernmost tip of the Antarctic Peninsula, she is researching how glacial melting is affecting the habitat of these coastlines.

On her first trip to the Antarctic in 1995, one of climate researcher Doris Abele’s colleagues showed her a graph of the consistent increase in the level of carbon dioxide in the atmosphere on a monitor. “Is that caused by the diesel generators at our research station?” Abele wondered. The response: “No, we are measuring much higher up in the atmosphere.”

In those days, carbon dioxide (CO2) was not much of an issue yet for the general public; people were initially much more concerned about the growing hole in the ozone layer. A few years later, Abele, who works at the Alfred Wegener Institute in Bremerhaven, the Helmholtz Center for Polar and Marine Research, understood what far-reaching implications this particular graph has for the ecosystem in the Antarctic. The so-called Keeling Curve, which her colleague had showed her back then, is now regarded as important evidence of global warming caused by human activity.

The Argentine Carlini Research Station is located at the tip of the western Antarctic Peninsula: “If you were to look at a map of the Antarctic, you would see a nose-like promontory pointing in the direction of South America,” Doris Abele says, describing the location of the station, which is run by the Argentine Antarctic Institute and the Argentine Antarctic Authority. Slightly to the west of the tip of this nose-like promontory is King George Island, where the Carlini Station and the Dallmann Laboratory, operated in collaboration with the Alfred Wegener Institute (AWI), are located. The journey from here to the German Antarctic research station Neumayer III takes almost six days.

Since the 1990s, the biologist, who is now 61 years old, has repeatedly been drawn back to the Antarctic: “It can be very beautiful here in terms of the scenery,” she explains with enthusiasm. “Some days, the bay stretches out in front of you smooth as a mirror, with the shimmering glacier in the background.” Such idyllic impressions mask the challenging living conditions on site: If you approach the Carlini Station from the water, you first see a group of steeply towering rocks – the remains of a volcanic eruption in ancient times. At the foot of this rock formation there are a dozen small red houses on metal stilts, which, on closer inspection, prove to be shipping containers stacked on top of one another.

Each container provides accommodation for four researchers, who sleep in bunk beds like at a youth hostel. German scientists are only allowed to do research at the Carlini Station in the Antarctic summer from November to April; at this time of year, the station is packed to the brim with 40 scientists and 50 military personnel. “I never feel lonely there,” says Doris Abele. “Everyone knows each other, and the atmosphere is very friendly.” The Antarctic winter, with temperatures as low as minus 20 degrees, is reserved for the logistics specialists of the Argentine military and one or two Argentine researchers. Abele has experienced the somewhat milder summer temperatures ranging from minus eight to plus seven degrees. The Argentine military provides the food, stopping at the station once a year with a cargo vessel designed for operating in Antarctic conditions. “Then the military personnel and the scientists alike have to carry the boxes of flour, pasta, tinned food, sugar, and sausage from the beach into the station.” There are no fresh fruit or vegetables at the station. “So I pounce on any shriveled old apple that anyone brings with them,” Doris Abele says with a smile.

“Glacial melting in the Antarctic is causing sea levels to rise on a global scale.”

Located on an island in the Southern Ocean, the Carlini Research Station can only be reached by ship or by plane. Until 2005, small planes such as Twin Otters could land directly on the glacier at the station. Because of climate change, however, so many cracks and crevices have opened up that it is now impossible to land a plane there. “During a helicopter flight, I saw how riddled with faults the glacier has become: It’s like a sieve!” The region is a hot spot for global warming: While temperatures worldwide have risen by 0.8 degrees over the last 100 years, the temperature at the tip of the Antarctic Peninsula has increased by around three degrees. “That is an unprecedented rise in temperature.” Working with her colleague Gerhard Kuhn from the AWI, Doris Abele has been researching the retreat of the glacier since the Little Ice Age. The influence the Antarctic has on the rest of the planet is enormous, says the geologist: “The largest ice mass on Earth is found in the Antarctic.” Doris Abele reiterates: “Glacial melting in the Antarctic is causing sea levels to rise on a global scale.”

Since her first expedition to the Antarctic, Doris Abele has noticed significant changes: “When I was there for the first time in 1995, I didn’t hear a sound from the glacier behind the station; an icy silence reigned.” 20 years later, the constant rumbling and thunder of ice blocks fragmenting could be heard throughout the bay. “We can see, hear, and feel climate change,” says the scientist.

From year to year, the researcher and her colleagues were able to observe and measure how the ice front of the glacier was retreating and losing height. “In the past, I used to trudge to the glacier with my ice box and fetch ice to keep my biological samples cool,” she recounts. In the meantime, the glacier has retreated so far that it would take her half a day to reach its fringes. Satellite images show that, in particular, the part of the glacier facing the sea has melted by almost a kilometer over the course of 60 years. Since 2016, this glacier is only on land and no longer protrudes into the bay in front of it.

Two years ago, the news that a 175-kilometer-long ice berg had broken off from the Larsen C Ice Shelf in the Antarctic attracted international attention. Doris Abele is immediately able to set this type of news in context, as she has become an authority on conditions in the Antarctic over the course of her career. Abele has been to the Carlini Station twelve times in total, spending several months there on each occasion. If you add it all up, she says, it comes to three years of her life. Doris Abele concedes that her two sons, who are now grown-up, often found it difficult that she was commuting between Bremerhaven and the Antarctic. For scientists, however, life at a research station is ideal: “If I want to, I can immerse myself in work, day and night. That is a great luxury for a scientist – just as it is for an artist or writer.”

In her research, Doris Abele focuses on the question of whether and how organisms and communities in the Antarctic can adapt to changing environmental conditions. “If they are no longer able to cope with the conditions, the range of species will change,” says the researcher. “We are particularly interested in how the underwater areas that have recently become ice free are populated by algae and marine animals such as sea squirts, sea sponges, and snails. The population, growth, and turnover of organic carbon in shallow coastal areas are heavily influenced by the rise in temperature and its consequences.

“If we do nothing, the western Antarctic will one day look like South America does today.”

Doris Abele now wants to carry out research in a region further to the north: The Beagle Channel between Argentina and Chile. As a result of the border dispute of the last decade between Argentina and Chile, this waterway has been the subject of little research in the past. The political situation has now eased to such an extent that researchers from Argentina, Chile, the United States, and Germany are trying to install a monitoring network to record environmental changes in the Beagle Channel for the very first time. The German Federal Ministry of Education and Research is supporting the so-called Dynamo Project with 300,000 euros in funding during the first phase of the project.

For Doris Abele, her research on the South American continent represents a time machine: “If we do nothing, the western Antarctic will one day look like South America does today,” she says with regard to the dramatic consequences of climate change: “Grass and plants will grow, people will settle and rear sheep.” Researchers are already observing the formation of a layer of humus around the Carlini Research Station. What may appear to be an idyllic picture, however, would have drastic consequences for the Antarctic ecosystem: Organic material that is washed from the land into the sea has a different composition to marine “compost”. In the coastal area, this would change the nutrient conditions and the microbial metabolism, and kelp forests would spread. Organisms native to the Antarctic, which are dependent on a low-nutrient environment, would have to find new habitats. “Then there would be no more krill in the sea and ultimately no more penguins,” says Doris Abele.

Antarctic researchers all over the world agree on one point: As long as people continue to emit CO2 without restraint and the Keeling Curve continues to rise, the glaciers in the Antarctic will continue to melt relentlessly – with far-reaching consequences for the Earth’s ecological balance and for humanity.

Since the beginning of the Industrial Age, the average global temperature has risen by more than 1 degree. How will our climate change in the future? What are the consequences? Can we succeed in significantly reducing greenhouse gases and thereby stop global warming? These are some of the many questions that concern the scientific community.

As part of the Helmholtz Climate Initiative, scientists will press ahead with their climate research by working on entirely new research projects and develop new networks to research climate change using a holistic approach.

We have compiled information and responses on our Helmholtz Climate Initiative website.