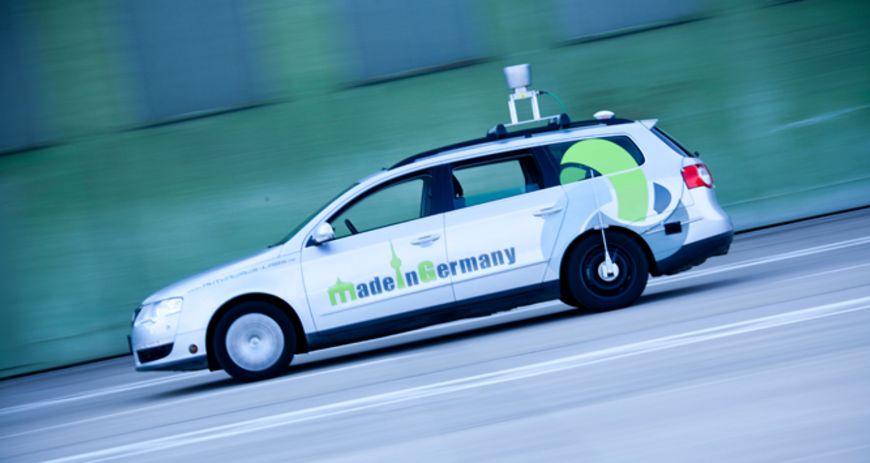 “We want to make everybody rich!”

It sounds like a scene from a science fiction film: Cars drive through the city. There’s no driver at the wheel, but instead, two or three people are sitting in the back engrossed in a book or chatting, completely oblivious to the traffic around them. Is it science fiction? No. This is set to be reality six years from now. A conversation about intelligent cars, public demand for convenience and the wealth of time

Mr Rojas, how much of a Doc Brown or Marty McFly from the film “Back to the Future” are you?

I’m definitely more of a Doc Brown – Marty is a brilliant anarchist, but Doc is more the scientist, like me. In science we all have to be a bit mad, just like the Doc is.

You have always been interested in artificial intelligence. You developed football-playing robots and, three years ago, you brought “MadeInGermany” onto the road – a car that drives through the streets of Berlin entirely without human control. That’s rather a scary thought. Why do we need autonomous cars – can they really drive without a driver?

The motivation behind it is quite simple: It’s about car sharing, where many people share a car that is purely destined to get them from one place to another. Cars currently transport an average of 1.3 persons. That practically amounts to one person per car, which is a complete waste of space and facilities.  There should be four or more people to one car. We have traffic jams with mile-long bottlenecks simply because we are still not able to turn the car into a truly public form of transport. Autonomous cars are taxis that are controlled by a computer that doesn’t get tired and can drive right around the clock. The cars are therefore utilised to full capacity and can comfortably transport masses of people. Autonomous cars will also drive better and more carefully – on a level that we humans can never hope to match. The computer has a 360 degree view of the traffic. The only thing that is missing is driving intelligence – and that will come soon.

Do we really need an autonomous car? Aren’t our lives already easy enough?

Very few people think driving is a pleasant thing. Just think of Mexico City or other cities of a similar size. Driving a car isn’t even fun in a city like Berlin. It’s more about making better use of our time, like rich people do by having a chauffeur. We want to make everybody rich.

Imagine the following scenario: The car is driving by itself, a business woman is sitting in the back seat engrossed in her work, the truck in front slams on the brakes, to the right is a child with a helmet riding a bike, to the left is a man without a helmet riding a bike, and a car is fast approaching from behind. How does the car decide what to do, whether to save the child and probably drive into the truck or swerve out of the way and, in the worst case, put the child at risk?

It is very difficult to align robotics and ethics. Even people could not master such a scenario. A small airplane recently had to do an emergency landing on a beach. Both people in the airplane survived, two people walking along the beach were killed.  Going back to your example, the most important thing is that the car does not swerve off the road. Although that is a very conservative strategy, it would probably be the only option the legislator would accept. And, as I have already said, we are developing autonomous driving intelligence is currently one of our top priorities.

And who is responsible for an accident caused not by human error but by the computer controlling the car and that, in the worst case, will not be able to prevent it from happening?

The computer would be responsible in this case. As the law stands now, it would lead to high compensation.  This is actually what has discouraged the automotive industry from considering autonomous vehicles for so long. But as the trend is unstoppable, the automotive industry is currently exploring new forms of insurance and compensation regulations.

Will the autonomous car prove popular? And if so, when?

The autopilot for the motorway should be ready for series production in around six years, in 2020. We will see how people react. We will only be able to measure the level of acceptance after a certain period of time has elapsed and once we have gathered a great deal of experience. It is going to be much more difficult to use autonomous cars in the city. There are just too many parameters that need to be considered. I’m sure it will take another 30 to 40 years before the technology is mature.

What impact will this development have on society?

If the concept gains acceptance and there are fewer cars on the roads then the main advantage I see is less pollution.  However this will probably cause big problems on the job market, especially in the automotive industry. If we only need a quarter of the cars we need now – which is an ambitious target – then, of course, much fewer cars are going to be produced. The switch should therefore be slow and well considered, and also cover the aspect of finding alternative employment opportunities.

Why is MadeInGermany driving in Berlin rather than somewhere else?

We have been authorised to drive in Berlin, which we are very pleased about. And we are working as a research institute and not on series production. While major car manufacturers have to deal with all the pitfalls along the way to series production, we can carry on researching and look further into the future. We have much more freedom than other people in our business who have to sell cars.

The internet giant Google has been working on the development of autonomous cars together with universities and car makers for quite some time. The Universität Braunschweig is also very active in this field with its car "Leonie". How do you rate your project in comparison with similar enterprises - who is leading the way in development, and who is lagging behind?

I don’t like making direct comparisons between our car and the competition, because we are all working on similar issues. I can only say so much: We are one of the leaders and we’re not ashamed to say so.

Do you even see Google or other researchers and developers of this type of car as competition?

No, not really – although there is competition among us, of course. We all know each other, meet at conferences and often exchange views and ideas. But at the end of the day, none of us are wizards and its silly to pretend we are.

What's the next step for MadeInGermany?

We are currently working on three things that are decisive for progress with MadeInGermany and general research in this field: First, identifying the intentions of other cars and pedestrians, i.e. identifying what cars and other road users are going to do; second, telecommunication between autonomous vehicles; and thirdly, swarm behaviour, i.e. the behaviour of cars when there are no road markings, for example, but the traffic still has to flow. I am convinced that our work will bear fruit and go into series production. But it might well take a few decades before autonomous vehicles are able to master all traffic situations.

Raúl Rojas is Professor of Mathematics, Computer Science and Artificial Intelligence at the Freie Universität Berlin. Along with his team of researchers in Berlin, he is one of the few scientists dedicated to the development of driverless, autonomous cars.  Their autonomous car MadeinGermany has been driving through Berlin since 2011. It recognises red lights, stop signs and other road users, respects right-of-way regulations and can manage normal traffic situations by itself.