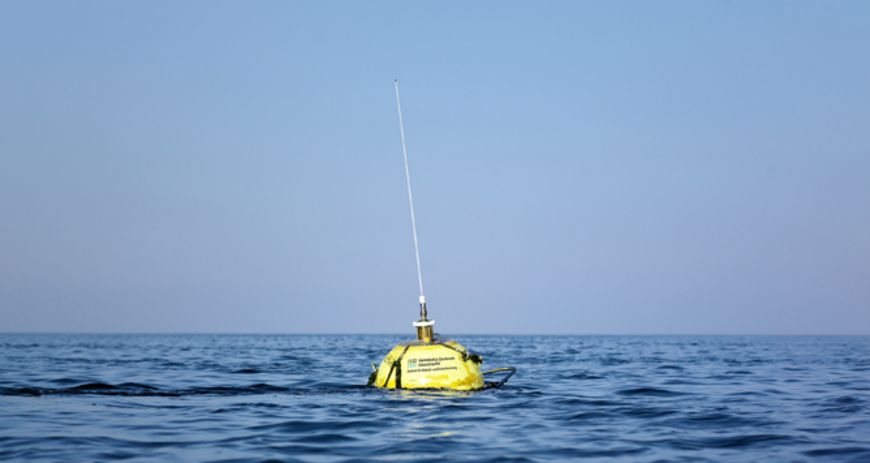 <b>Swimming and measuring</b> This North Sea Buoy ist part of the project COSYNA; that is part of a unique global data network. Photo: Helmholtz-Zentrum Geesthacht

The most precise coastal observation system

What do a seagull, a satellite and a buoy all have in common? The answer is – all of them can provide help to coastal research.

The gull equipped with a GPS transmitter guides the way to hotspots in his search for food. The satellite records the colour of the ocean – an important indicator for evidence of algae. And the data buoys rocking back and forth on the waves transmit the latest information regarding the sea state.

Procuring such information and condensing it down to highly precise statements is the basic concept behind COSYNA. The long-term observation and analysis system has taken a leading role in operations conducted by the Helmholtz-Zentrum Geesthacht (HZG) in joint collaboration with scientists and official partners since 2009. The main focus is on the German Bight with its shipping lanes and water-management zones, conservation areas and holiday islands – and the Arctic Sea around Spitzbergen as well. From Borkum to Sylt COSYNA covers the North Sea with a scientific dragnet that is unique worldwide. Copious marine data are caught in the mesh: from research ships, radar stations and environmental satellites, from sensor boxes installed on ferry boats, cargo ships and measuring platforms, and from submersible vessels (so-called gliders) and seabed observatories (so-called landers). Even seagulls and buoys are entrusted with measuring missions. The data streams flow together at HZG and refine existing simulation models in real-time. The approach opens new possibilities in marine monitoring for the analyses of, for example, environmental compatibility of offshore wind parks, or for prognoses concerning the effects of climate change in the region. Everyone is allowed, by the way, to take part in the activities and findings at COSYNA – most recently via interactive app.