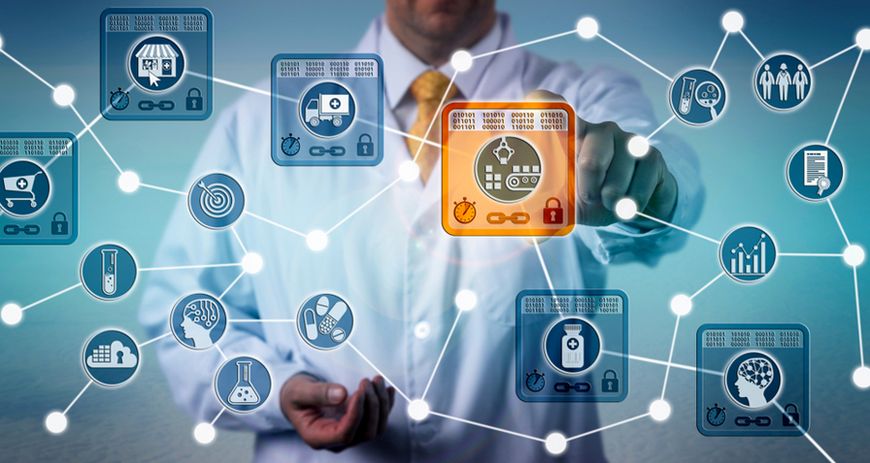 The democratization of scientific data

Computer scientist Ali Sunyaev believes that blockchain technology is set to change our society just as much as the Internet has in recent decades. At the Helmholtz Horizons Symposium, he also shared his insights on what this means for science.

Everyone’s talking about blockchain. This technology stores information in an open, distributed ledger consisting of a continuous list of "blocks" or datasets, where it is processed and then linked in encrypted form as part of a chain of blocks. Blockchain has become increasingly successful since it first got its start in the financial industry, where it was used to calculate Bitcoins. The new value of this cryptocurrency is continuously calculated based on that of previously generated Bitcoins, so each new transaction is documented in a new block and linked to the end of the chain. This results in the chain being updated each time a new block is added.

But blockchain’s relevance extends beyond the financial sector. Ali Sunyaev, Professor of Computer Science and Director of the Institute of Applied Informatics and Formal Description Methods at the Karlsruhe Institute of Technology (KIT) is convinced that this technology has the potential to revolutionize science as well. In his presentation at the Helmholtz Horizons 2018 event in early November 2018, Sunyaev discussed how blockchain will influence science – and every single one of us, too.

"The use of blockchain-based solutions promises to further democratize access to scientific data and results, support the reproducibility of scientific results more effectively, and enhance transparency in science, for example when it comes to the evaluation of scientific performance," says Sunyaev in regard to blockchain’s potential benefits. Once rules have been agreed by all participants, blockchains could ensure that they are upheld. And the KIT researcher believes that blockchain technology could result in changes as far-reaching as those that occurred when the Internet began to revolutionize the world 30 years ago.

Together with his working group at KIT, Ali Sunyaev seeks to make special forms of electronic data processing and storage like blockchain usable for science. The team’s primary focus is redesigning the underlying information systems with respect to their technology and the way they are organized, while involving interested individuals and organizations in these efforts. "In research, we often deal with sensitive information. The data is often very personal, particularly in the fields of medicine or the life sciences, for example genomics ," Sunyaev says. Not only is it a question of securing the data against access by non-authorized parties, he says – it’s also a question of information privacy . Which of the patients’ data is stored where? Who may use this information and for which purpose? "Blockchain removes single points of failure in data storage and improves the integrity and availability of data,"  notes Sunyaev. He says that the technology is capable of protecting sensitive information better than ever before. However, the KIT researcher also acknowledges that most blockchain applications today were not designed for working with big data, as is required in the omics technologies – or at least not yet. Currently, science uses hybrid solutions for these purposes: Data is stored in a cloud, and blockchain is only used to control access to it. However, research is currently being conducted in this area, Sunyaev notes, and this approach will be modified in the coming years if possible.

The topic of participation is also an important aspect of blockchain technology: Accessing and sharing information is now easier than it has ever been before, Sunyaev says. But competition between those who want to use data is fierce. Why, for example, should someone who has access to genetic data share this with researchers – especially when there are uncertainties regarding what will happen to the data? "Smart contracts, which are a central component of blockchain, should help facilitate this," Sunyaev explains. Such contracts set out the purposes for which the data can be used in very precise terms between those who provide data and those who use it. "This allows entities supplying data to decide whether to make genetic data available to researchers or not." Plus, he says, blockchain could open up new possibilities in terms of how researchers publish their results as well as how they are evaluated and obtain funding.

All in all, Sunyaev concludes: "Blockchain is a disruptive technology that will not only influence individuals, organizations, science, and business, but rather our society as a whole – and those who have yet to comprehend that have a lot of catching up to do."  And Sunyaev is certain that it will transform the ways people store, manage, and use data and processes.