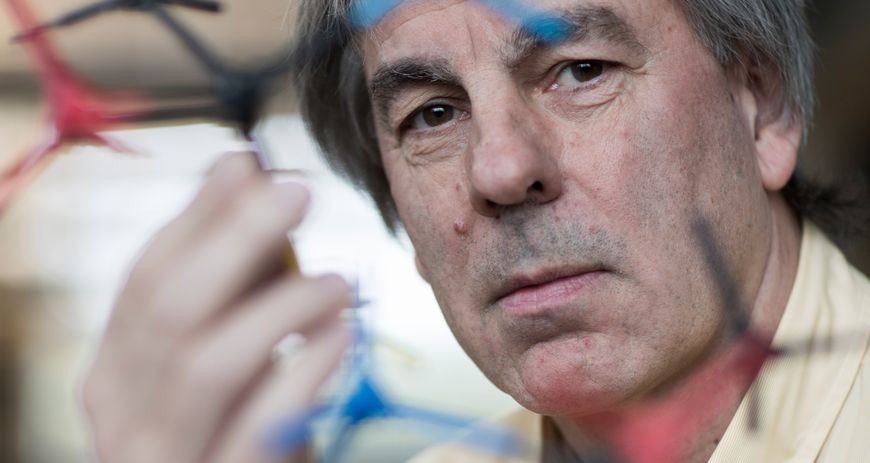 Bert Meijer is one of the world’s leading researchers in the field of supramolecular polymers and their application in materials research and development. Image: Wikimedia

Head over heels for molecules

Bert Meijer specializes in complex molecular systems and their formation. A native of the Netherlands, Meijer is a professor of organic chemistry and conducts research in the field of supramolecular polymers.

When you devote all your time to something, when you want to tell the whole world about it, and when that special something makes your heart beat faster, it can only mean one thing—love. “I’m in love with molecules,” confirms Egbert Willem “Bert” Meijer, Professor of Organic Chemistry at Eindhoven University of Technology and a specialist in the field of supramolecular polymers.

Bert Meijer and chemistry share a very close relationship. But it wasn’t predestined to be that way. After finishing school, Meijer knew that he wanted to study something in the sciences. He quickly ruled out mathematics and biology, and physics wasn’t for him, either. “I actually ended up in chemistry through the process of elimination to start with,” admits the renowned Dutch researcher, who has received countless prestigious awards, prizes, and honorary doctorates for his research during his career. So who or what was it that kindled his interest?

“Hans Wijnberg, who was later my PhD supervisor, first introduced me to molecules when I was 20,” says Meijer. For him, molecules always represent more than just the smallest particles with properties of the underlying substance—and today he still sees them as the starting point for basic research that gives rise to innovations. Nonetheless, Meijer turned his back on academia for a decade and worked in the research industry. It was an experience he would recommend to any scientist.

“I think that leaving our comfort zone and doing something completely different is extremely important for our own development.”

“After studying organic chemistry, I gained knowledge regarding polymers in industry,” he explains. He returned to the university with these practical experiences and transferred them back into his research. This was another key moment, because the connection between the polymers—the chemical substance made up of macromolecules—and his knowledge of organic chemistry would determine his work as a researcher from then on.

Supramolecular polymers are polymers (chemical substances) that are held together by relatively weak chemical bonds such as hydrogen bridges.

These bonds are easily broken, but they can also quickly self-assemble again, which is why they are considered to be self-healing materials.

For example, supramolecular polymers can melt when heated and possess flow properties like typical liquids. When cooled, they change back into the initial synthetic material.

The dynamic properties of supramolecular polymers could be highly advantageous in the fields of energy research, electronic engineering, and biomedicine.

Demand is growing worldwide for materials that are both hard and soft yet flexible—and, above all, are lightweight.

As the founder of the Institute for Complex Molecular Systems, Meijer wants to get to the bottom of the questions he sees as central and all-important to humanity: “How did life on Earth begin? How did complex molecular systems develop?” He believes that his specialism, supramolecular chemistry, makes an essential contribution to answering these questions. And his team’s expertise would advance topics such as sustainability and regenerative medicine.

While Meijer was still closely involved in experiments at the beginning of his career, he primarily assists his students with their research today. He says this has also become the best part of his job—supporting young people as they perform research and take the first and most important steps in their scientific careers. Meanwhile, his own achievements continue to recede into the background for Meijer.

After all, what do prizes matter when you could use your research to change the future for the better? He says that innovation requires young, smart people who ask questions. Next year, the graduates and PhD students Meijer has worked with—many of whom have since become important figures in research themselves—will be gathering for a class reunion of sorts, and he’s very proud of this.

He notes that his contract with the university will last another six years, at which point he’ll be 70. He is anything but tired, because his intense curiosity keeps him going. Meijer says that if you want to change things, you also have to be willing to do something new. He notes that he gets bored easily. So what drives him? “When people say that something is impossible, that makes me curious. Is it really impossible?”

Between September 2019 and February 2020 , Helmholtz's research was evaluated by high-ranking international experts. The strategic evaluation aims to review the strategic plans of the research field and to propose a basis for the distribution of funding among the programs. Bert Meijer was chair of the high-caliber panel of international recognized experts.