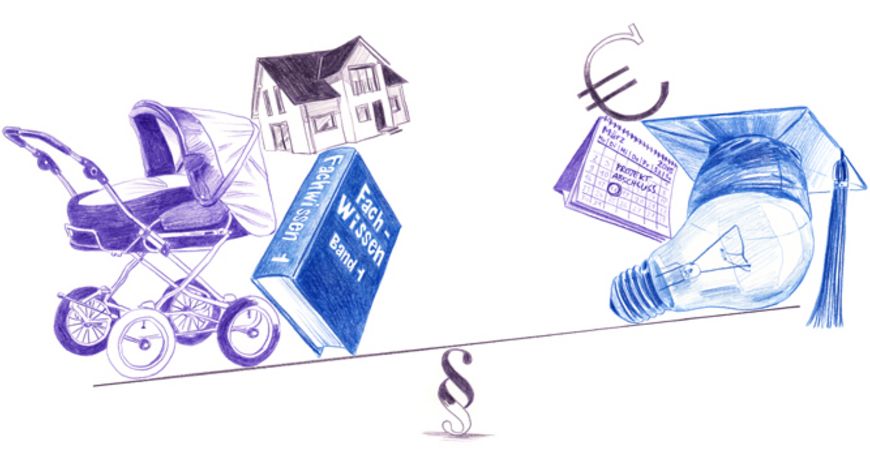 Should there be more permanent contracts in research?

The German Education Union GEW has been calling for more long-term jobs in science for many years, and now Federal Minister of Education and Research Johanna Wanka is adding her voice to the demands. Is the need for action really that severe? We present two points of view.

I should point out right away that I have always been in favour of family-friendly working conditions and personal development. Longer-term employment contracts allow for more comprehensive planning security, particularly in core subjects and at larger research facilities.

Nevertheless, calls for a vast increase in the number of permanent employment agreements are going too far. If we compare Germany to the international scientific landscape, we see that there are no permanent positions according to the German model in many countries. On top of that, there are five factors that I think serve as justification for retaining a substantial proportion of non-permanent employment contracts. These are: staffing structure, our obligation to be fair to all generations, the unpredictability of scientific developments, the availability of positions that can be filled by newly appointed junior professors, and finally, the need to acquire the brightest minds.

At my university there are 4,661 scientific staff members. Fifty-six percent of those positions are financed through projects. These people cannot be taken on permanently precisely because of the limited duration of the projects and the limited financing available for them. Among the remaining 44 percent, there are many so-called “qualification positions”. If we were to make all these permanent today, we would not be able to staff the positions with new doctoral candidates for decades to come. This would lead to a lack of new and fresh ideas and would be unfair to subsequent doctoral candidates, who would be short of opportunities.

Scientific personnel are linked to certain topics. A permanent position for all employees would prevent scientific facilities from reacting quickly to new scientific developments. New topics would be recognised, but new personnel could not be appointed. There are no professional negotiations in which the question is not posed of how many positions can be filled by candidates within our own personnel. If the answer is “none”, the odds of filling that position are extremely bleak – no matter how good the existing personnel are.

In my opinion, the solution can be found in a measured balance between permanent and temporary posts and in taking a flexible approach to employment contracts in the interests of science.

“It is time for science to start thinking about new forms of staff development”, says Andreas Schlossarek of the working group of the works and staff councils of non-university research institutions (Arbeitsgemeinschaft der Betriebs- und Personalräte der außeruniversitären Forschungseinrichtungen).

It seems that the topic has at least registered with the responsible parties now. There has been a lot of discussion in recent years in universities and research facilities about how non-permanent work contracts have made it diffi cult, if not impossible, for employees to make longer-term decisions about their lives and family planning. Also, high levels of fluctuation have cost the research sector much valuable know-how. The fact that the debate is becoming heated can be seen, for example, in the recommendations from the council on career advancement in universities, which includes criticism that there are not enough permanent positions for permanent tasks. It has also been observed that the lack of permanent positions generates insecurity and dependency, is not family friendly, and hampers equal opportunities.

I can only agree with Education Minister Johanna Wanka’s warnings to the universities that the money made available to the states now that the Federal Government has taken on responsibility for student grants should also be used for permanent positions. But certain areas of the Helmholtz Association also offer short-term contracts, apparently with the goal of ensuring flexibility but this does lead to on-going insecurity for employees. In principle, so long as the human resources department practices forward-looking workload planning, the problems with temporary positions could be avoided. Moreover, a principle of “permanent positions for permanent tasks” should be adopted. The fact that some projects are of limited duration does not have to conflict with this. Of course there have to be postdoc positions, and in certain fields temporary contracts are needed to allow science to remain responsive. But in my experience, many institutions use this argument to shirk their responsibility – they feign a need for flexibility in order to avoid having to offer any permanent contracts at all.

I believe it is time for science to start thinking about new forms of staff development. And researchers on temporary contracts have to be incorporated into these considerations. Their motivation increases if they can see, from an early stage, what perspectives they might have in another position once their temporary contract comes to an end. And research facilities and universities could use these opportunities to improve their reputation as attractive employers.