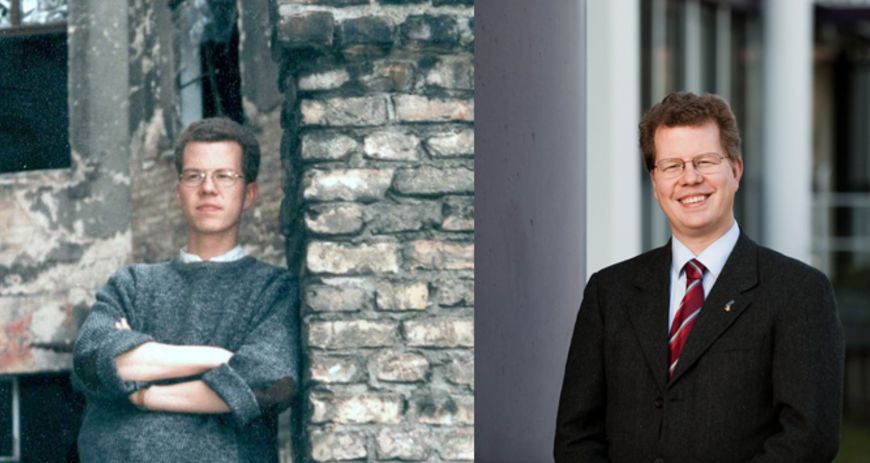 25 Years Fall of the Wall

We talked with soldiers on the Alexanderplatz in Berlin

On November 4, 1989 Johnannes Orphal demonstrated on the Alexanderplatz. "40 years of fear as a method" was written on his poster. The place was surrounded by water cannons, tanks and soldiers. Orphal spoke with them. Today, the renowned climate scientist thinks with relief at the fall of the wall

The door to the world opened up for me with the fall of the Berlin Wall in November 1989. I clearly remember this restless, exciting time and my intensive emotions: joy, tension, curiosity, and some anxiety. Unknown freedom awaited behind that door; it was visible in loud colours and advertising, beautiful cars and buildings, strange new foods and products, new scents and smells ... at last the freedom to travel we had desired and demanded for so long – and I was well aware that passing through that door definitely was a one-way ticket.

I was 23 years old at the time, a pastor's son in the GDR, studying physics at the Humboldt University in Berlin, and obviously completely open to this unexpected change. After all, it was an enormous relief: back then I really did not know what could become of me in this odd country – on the one hand featuring a very dynamic intellectual and cultural scene, on the other fraught with restrictions and threats. Even though it may be depicted very differently nowadays: the party and Ministry for State Security were very omnipresent and decisive. This is why I studied history and philosophy of science in parallel to physics, to keep other options open for the event of my career as a physicist being obstructed. Prior to studying, I had worked at a computing centre (a 4 shift operation) for two years and knew how tiring everyday work in "production" was. I did not want to have to endure that for the rest of my life.

On 4th November, not even a month after the official events to celebrate the 40th anniversary of the GDR during which friends of mine had been hunted by the police in the evening, hundreds of thousands of people congregated on Alexanderplatz in Berlin to force the government to acknowledge our issues. I had painted a slogan on a big bed sheet, which two of us carried: "40 years of fear as a method". It was a wonderful feeling. The square was surrounded by soldiers armed with rifles, water guns and tanks. We spoke with them; they were embarrassed: they were the same age as us.

When the Wall was eventually opened on 9th November, I was not in Berlin; we only heard about it on the radio in the evening and decided to drive into the city early the next day. We could hardly sleep that night due to excitement. On the morning of the 10th of November, the East Berlin city centre resembled a ghost town: long lines of empty trams (even the drivers were absent) blocked the rails, cars parked everywhere on the pavements, people were nowhere to be seen. Walking through the still secured border post on Chausseestraße (we had to show our ID and it was stamped; I kept it to this day) was a huge relief. For years I had lived only a few hundred metres from the Wall.

A quote by Karl Marx – "The philosophers have only interpreted the world, in various ways. The point, however, is to change it." – adorns the lobby of the main building of the Humboldt University in large letters. I had always thought this was a very dangerous sentiment for the GDR, but obviously the SED ideologists thought it was not applicable to the country itself (after all, they thought they had found the absolute truth – utterly undialectical).

As a climate researcher I now truly work on changing this world.

Prof. Johannes Orphal has been Head of the Institute for Meteorology and Climate Research (IMK) at the Karlsruhe Institute of Technology (KIT) since 2009. He is the scientific spokesman for the Helmholtz programme "Atmosphere and Climate" and also the KIT Center "Climate and Environment". He completed his PhD in Orsay (France) in 1995 and from 1999 to 2009 worked as a researcher at the French National Center for Scientific Research (CNRS) and as a professor at the Université de Paris-Est.