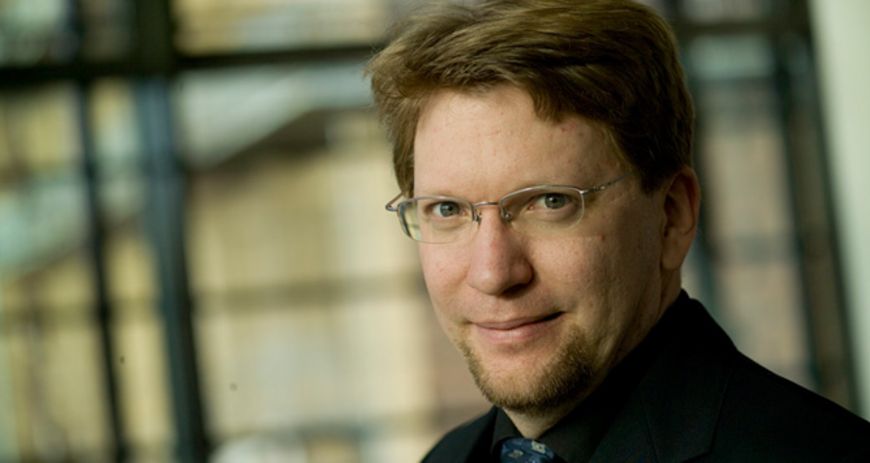 Communication between science and society cannot be a one-way street, opines Carsten Neßhöver. This environmental research scientist is looking for new forms of knowledge transfer.

He never had the typical desire to become a locomotive driver. “Something to do with nature” is what he preferred. Carsten Neßhöver was already sure of this as a schoolboy. But the idea that he would one day study geo-ecology and then dedicate himself to the fields of biodiversity research and knowledge transfer – he never would have dreamed that this could be possible. “At that time back in the 80s, I didn’t even know that these subjects existed, let alone what they involved,” he explains.

Today things are different. The trained geo-ecologist has been working now for the last ten years at the Helmholtz Centre for Environmental Research in Leipzig. In the meantime he has become the Assistant Department Head for nature conservation research. However, he doesn’t spend time in the laboratory, he admits. He was hired to deal with the interface between scientists at the UFZ on the one hand, and politics and public relations on the other. For this purpose, he developed the project Network Forum for Diversification – and today he is the coordinator. “We spend time here contemplating how it is possible, under the umbrella of biological diversity, to improve collaboration between politics, science and society.” He says that it is particularly exciting that he can also be active at both European and international levels .

Neßhöver’s workday however involves primarily the development of activities for this interface and observation of political processes in his office in Leipzig. Frequently, this also means motivating researchers to take the first step towards involvement in this discourse. “This is because not all scientists believe that they have to speak about their work in a public setting,” Neßhöver emphasises. “After all, there is an awareness evolving among scientists in the field of environmental research that they have to make their knowledge available to politics and society,” says Carsten Neßhöver. Scientists from the environmental sector, such as UFZ, are increasingly less bothered by that. Their work lies in the domain of application anyway, and they are considerably self-motivated because their research actively contributes something to society.

The scientists’ increase in motivation for introducing their work to non-specialists is inspirational for Neßhöver as well. But he and his team have been increasingly confronted by a particular obstacle – the knowledge that is generated by science has to be presented in such a way that it is accessible to a non-scientific audience. Moreover, Neßhöver is facing another challenge – in his position he has to be active in politics himself; after all, he has to be aware of which topics he could get more involved in, he says. This is because political circles are not always cognizant of which areas of expertise are able to help make decisions.

But what exactly does it look like – this transfer of knowledge? In the foreground of his work, says Neßhöver, we have dialogue. “It is important to express that communication is never a one-way street. Science cannot and does not want to just stand there and say that they have found the truth, and everyone else then has to bow down to this message,” he says. This is why he counts on dialogue-orientated approaches and develops workshops in which decision makers can come together with scientists. In this context, problems are defined and analysed together regarding how science can process this. Often times there is a shortage of precise questions posed to science that can only arise during a mutual exchange of ideas. But in the meantime, this works so well that gaps in research can be specifically identified. “It is still common practice that science identifies problems, and politics draws attention to them,” explains Neßhöver, “but again and again what happens is that politics observes certain developments and expresses a desire to examine them.”

But what also has to be clear in dialogue-orientated work is the following: science is just one voice among many. Many interests have to be considered, and biodiversity research is the best example of this. “We can point out which economic activities are harmful for the environment, but economic decisions have to be made nonetheless,” says Neßhöver. This must also be communicated to the scientists. A decision-making process, especially one dealing with environmental issues, is highly complex. And now and then it happens that the interests of nature conservation and biodiversity have to back down vis-à-vis economics or social programmes. Particularly in recent years in which several economic crises have occurred, this has become clear.

For scientists this means: The issue is not always just conservation arguments regarding nature. Economic entry points have to be provided as well, since the target groups for the work carried out by Neßhöver and his team are quite diverse. “We have to deal not only with the ministry of environment – we also have to keep dialogue open with the other ministries. Biodiversity also carries economic significance,” says Carsten Neßhöver.

On the other hand, it is precisely this diversity that makes his work strenuous, he admits. It is not always easy being placed between two stools. This is because in that situation you are forced to try to make almost everybody happy. Carsten Neßhöver has found his compensation for this in nature. Especially the island Juist in the North Sea – it is a huge attraction for him. “The meaning of nature for human beings becomes clear to me here – the fresh air, the wind in your hair, fresh fish,” he says. This significance has also inspired Carsten Neßhöver to write a book. It is called “Biodiversity – Our Most Valuable Resource”, and thus possesses a title that, in just a few words, gets to the heart of his private and professional passion.