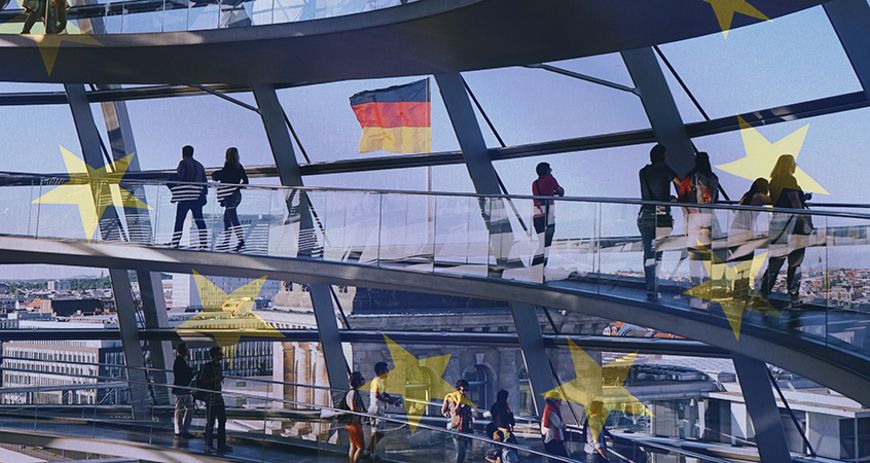 The German government has ambitious plans for the German EU Council Presidency: from pandemic management to climate protection and digitalisation. Europes top-level research should be the key to meeting these challenges. A commentary by Annika Thies, Head of the Brussels Office of the Helmholtz Association.

On 1 July Germany took over the Presidency of the Council of the European Union for six months. It had been clear early on that this would be a so-called "working presidency": Many mandatory dossiers to be completed by the end of 2020, little time for freestyle. Presidency programmes are always ambitious and they have to be. However, the COVID-19 pandemic has thrown the original plan into considerable turmoil. Resilience is now the big keyword.

The official motto of the Council Presidency reads as follows „Together for Europe’s recovery“. Europe should not only become stronger, more innovative, fair and sustainable, it should also overcome the pandemic and set the economic recovery in motion. There is also a lot at stake for research, for example the realignment of the European Research Area, a kind of counterpart to the European internal market. Some observers worry: Isn't all this too much? The counter-question: Is there any other choice? It is encouraging that Germany and its two "successors" Slovenia and Portugal have closely coordinated their efforts and developed a coherent programme.

While the political focus over the next six months is likely to be on budget negotiations and the Brexit, the presidency programme also pays tribute to research. First of all, the new framework programme for research and innovation "Horizon Europe" urgently needs to be finalised so that it can start as planned in January 2021. It remains to be seen how non-EU states such as Switzerland or Canada can participate in it - a difficult matter in times of Brexit. It is even more complicated to decide how the budget is to be distributed. Nevertheless, the big issue is a completely different one: The negotiations on the overall EU budget for the years 2021 to 2027 must be concluded early enough. The time frame for this is tight, the political challenges are enormous, and the logistical conditions are more than difficult.

The original priorities of the Federal Ministry of Education and Research seem to fit in well with the revised presidency programme. However, the pandemic has added even more topics. Being aksed about it, this sore spot is also seen by those who are in charge of these dossiers. The largest research policy package besides Horizon Europe is certainly "make the European Research Area even more dynamic and targeted in the spirit of solidarity" and in doing so to "launch initiatives on green hydrogen, Europe’s resilience to pandemics, citizen participation and enhanced international cooperation". (quotes from the presidency programme)

These are all essential topics – and they are not the only research-related undertakings: During the German EU Council Presidency, the Federal Government intends to work towards continuing the EU vs. Corona Action Plan, improving access to health data and investigating the effects of the corona crisis on transport infrastructure and its resistance to crises. In addition, Europe is to become digitally sovereign – important keywords are artificial intelligence and quantum technologies – and the same applies to the European digital infrastructure. Also, Germany supports the „Europe’s Beating Cancer Plan“ as well as the Mission on Cancer.

Critics often argue that the European Union is a problem rather than a possible solution. In the field of research, one thing is clear: European cooperation is the key to finding solutions. Because issues such as climate, energy or health do not stop at national borders. Letting the best and most innovative scientists from Europe and partner countries work together on these topics is part of what the European Union is all about. Bonus point: It is becoming clearer than ever that research plays a central role in tackling the major challenges facing society. The programme of the German EU Council Presidency underlines this.