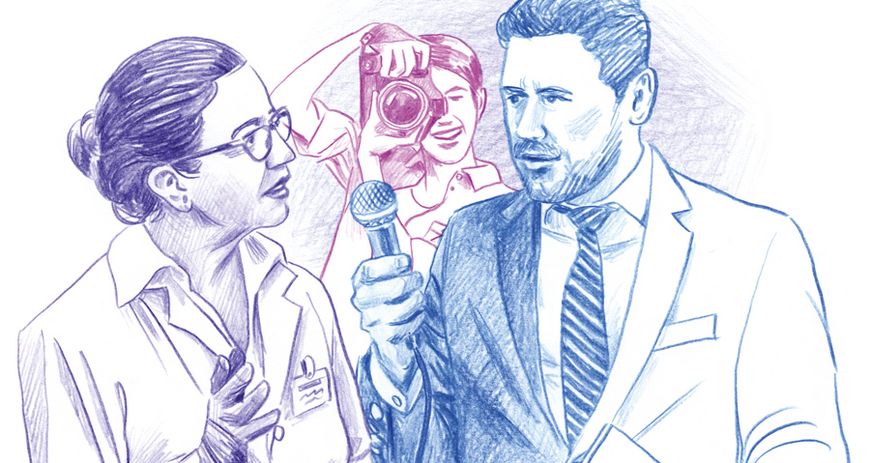 Science journalism is at crisis point: Editorial offices and departments are being scaled back, budgets are being cut. But should the scientific community finance the coverage of its own work? Two points of view.

“The risk of interference and corruption would be too great, and could even lead to a loss of credibility.”

It’s undeniable: A free press and critical journalism are essential to democracy. This also includes science journalism. It monitors research and scientific work, uncovers unpleasant truths, and puts findings in context for the benefit of the public—especially when they are controversial. Although to some extent it has lost its function as an “interpreter” of research to science communication, it often still plays this role by opening up fascinating aspects of research for readers and viewers. But does that mean that the scientific community or government science departments should finance it themselves?

This is what Volker Stollorz and Reinhard Hüttl recently advocated in an article entitled “How to make knowledge accessible” (German title: Wie man Wissen zugänglich macht, Die Zeit, no. 42/2018). In 2017, a second report by Germany’s leading academies of science on communication between the scientific community, the public, and the media (Zur Gestaltung der Kommunikation zwischen Wissenschaft, Öffentlichkeit und den Medien, WÖM II) had already called for public money for science journalism, at that time from radio and television license fees. Stollorz and Hüttl have gone a significant step further: They would like the money for a “Foundation for Science Journalism” to come from research funding itself.

That would have repercussions for the academic system itself and could possibly discredit it. Science journalism is part of the media world—which itself is still largely part of the economic system, even if print media in particular are experiencing serious problems due to the loss of advertising revenues. If, however, the two systems were to be combined unnecessarily, would journalists still have good reason to complain that the relationship between business and science is too close?

“Quality journalism is a cornerstone of our democracy. This is where our idea for a foundation comes in.”

How can knowledge be made accessible? I recently discussed this question with Volker Stollorz in an article for German newspaper Die Zeit. Some reactions to it were published on the wissenschaftskommunikation.de platform—including a response from Josef König. Some of his arguments are worthy of consideration, others questionable. Josef König is right when he talks of (science) journalism’s days of plenty. However, this time began years ago with the introduction of commercial television (1984) and the collapse of the GDR (1989). West German publishing houses, some with no experience in the daily newspaper business, bought up publications in the East. Editorial departments were reorganized and expanded. Lavish supplements covering subjects like motoring, travel, interiors, and careers emerged—and with them their own dedicated editorial teams.

The hangover followed when the dot-com bubble burst and the revenues from classified and commercial advertising slumped. Publishers started to save paper. Editorial departments were merged, shrunk, or closed. Small titles were bought up by large publishing houses, with stories supplied by centralized editorial offices. The apparent diversity at newspaper kiosks masks the increasing uniformity of content. This—very briefly—is the economic backdrop against which the “journalism in crisis” drama is being played out.

It would be more than negligent to wait for market forces to somehow regulate this situation, should this ever be possible in the present economic circumstances. Independent, quality journalism is a cornerstone of our democracy—without it, it would be impossible to maintain democracy in the long term. This is where our idea for a foundation for science journalism comes in. Many publicly funded institutions, including the GFZ (German Research Centre for Geosciences), are run as foundations.

This way, there is no need for capital stock from which to draw dividends. And as far as independence is concerned, both the scientific community and the media have very well-established mechanisms to prevent investors from influencing content or their freedom, which is protected under the constitution. How else are media supposed to sell advertising space without getting a reputation for bias? And how should research treat funding from third parties? It’s true that establishing such a foundation requires a plan—what activities should be supported, how, when, and on whose behalf—and a code of conduct that ensures independence as a top priority. This is the next step; one that we are now organizing.