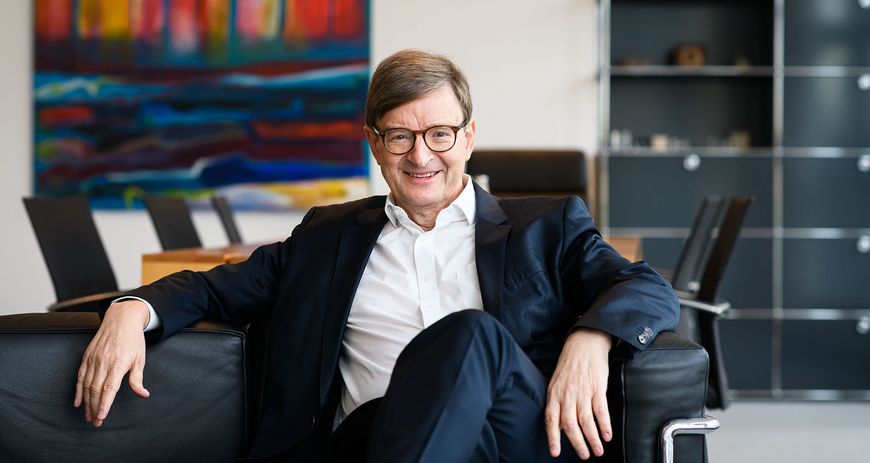 The Weizmann Institute of Science honors Otmar D. Wiestler by awarding him an honorary doctorate. In an interview with Daniel Zajfman, the Helmholtz president talks about successful collaborations, brilliant minds - and baked cauliflower.

Mr. Wiestler, yesterday the honorary doctorate degree from the Weizmann Institute of Science was awarded to you. What does this award mean to you?

Otmar Wiestler: Receiving this award is a unique, wonderful honor for me. For this great recognition, I thank the Weizmann Institute of Science and my friend Daniel Zajfman from the bottom of my heart. The Weizmann Institute is one of the institutions I admire most. I have had a special relationship with Israel for decades - so this honor takes on an even deeper meaning.

Mr. Zajfman, you have a long-standing friendship with Otmar D. Wiestler. What do you appreciate about each other?

Daniel Zajfman: We have known each other since our time together in Heidelberg. More than 15 years ago, Otmar was director of the German Cancer Research Center and I was director of the Max Planck Institute for Nuclear Physics. When we first met, we discussed the demands of science and soon found agreement - not only on important research approaches, but also on the world in general. In this way, our friendship solidified. As a physicist, I learned a lot from Otmar about life sciences and personalized medicine. When Otmar later became president of the Helmholtz Association and I headed the Weizmann Institute, we quickly identified many synergies and connections, because the two organizations complement each other wonderfully. Thus, we have created many scientific collaborations over the years. Otmar paved the way for this connection and continuously developed it further. Otmar is also a role model as a scientist and a “builder of science”: His approach to scientific research is very efficient and drives excellence.  We are therefore very pleased to award Otmar for his accomplishments in our fruitful collaboration and are very proud that he accepts our honorary doctorate.

Otmar Wiestler: Daniel and I share a passion for science at the highest level. One of our shared objectives is to conquer new areas of science. And we agree that this requires first-class young researchers. We are always looking for new ways to identify and nurture young talent. Although we have completely different backgrounds - physicists are very different people than physicians - we share many interests. I have learned a lot from Daniel - this also enriches our friendship. I still remember our first meeting in a Heidelberg restaurant. We quickly realized that we had a special connection. It has remained that way to this day.

What do Weizmann and Helmholtz or Israelis and Germans learn from each other?

Otmar Wiestler: The absolute passion of Israeli scientists for new, often allegedly risky paths in research comes to mind first. Our German researchers are happy to be inspired by this enormous commitment.

Daniel Zajfman: I like to illustrate the difference between the two countries by driving a car. In Israel, we drive briskly and quickly, we don't pay attention to the risks and we don't necessarily look at the stop sign. In other words: Israeli scientists start their research without much formality, they just get going and accept the risks. But as soon as it comes to reliable data, the scientists are better off in Germany...

Otmar Wiestler: ... this combination of different characters of highly talented researchers complements each other perfectly. Collaborations between Weizmann and Helmholtz can be extremely successful in this way – a good example is the collaboration between DKFZ and Weizmann on microbiome research.

Daniel Zajfman: Another fruitful cooperation is the establishment of the laser laboratory between the Helmholtz-Zentrum Dresden-Rossendorf (HZDR) and Weizmann: The Weizmann-Helmholtz Laboratory for Laser Matter Interaction (WHELMI) bridges the gap between basic research and application. The total funding volume amounts to five million euros. Our researchers are jointly developing high-intensity lasers that will open up many new possibilities, for example in the treatment of tumors.

Is there a joint project that you particularly value?

Otmar Wiestler: I am particularly proud of the Research Schools that we have founded. Graduates from the Weizmann Institute and from the Helmholtz Centers come together and work on cancer research, imaging techniques and materials research, among other things. I am always fascinated by the energy that is generated: When Daniel and I opened the Helmholtz Weizmann Research School on Multimessenger Astronomy in Rehovot with 50 graduate students from Rehovot, Zeuthen and Hamburg, you could literally feel the spirit and the motivation of the creative talents. However, these research schools are not only about promoting scientists. This collaboration also creates friendships that often last a lifetime and strengthens the bond between our two countries. Through scientific research, we are building a wonderful bridge between Israel and Germany.

Mr. Wiestler, because of the pandemic you had not been able to travel to Israel for a long time. The country is known for its delicious food. Which Israelian specialties have you been most looking forward to on the evening of the ceremony?

Otmar D. Wiestler was born in Freiburg (Breisgau, Germany) in 1956. After completing his medical studies at the University of Freiburg, he obtained his Doctorate in Medicine in 1984 (summa cum laude). Between 1984 and 1987 he was a postdoctoral researcher at the Department of Pathology at the University of California, San Diego, USA. He then changed to the University Hospital Zurich in Switzerland, where he qualified as University Lecturer in Pathology. In 1992 the University of Bonn appointed him as Professor for Neuropathology and Director of the Institut für Neuropathologie where he helped to establish a large neuroscientific research centre.  Between January 2004 and August 2015 Professor Wiestler led, as Chairman of the Executive Board and Scientific Director, the German Cancer Research Center in Heidelberg (DKFZ), which is one of the leading institutions in cancer Research in the world. Appointed as President of the Helmholtz Association in 2015.

Born in Belgium in 1959, Daniel Zajfman moved to Israel in 1979. He received a BSc (1983) and a PhD (1989) in atomic physics from the Technion – Israel Institute of Technology. In 1991 he joined the Weizmann Institute's Department of Particle Physics (now the Department of Particle Physics and Astrophysics), after concluding his postdoctoral research at the Argonne National Laboratory near Chicago. Since 2001, he has also been an external member of the Max Planck Institute of Nuclear Physics in Heidelberg, Germany, and he served as Director of that institute (2005-2006). In 2006, he was elected the tenth—and youngest-ever—President of the Weizmann Institute of Science. In 2019 Zajfman stepped down from the helm of the Weizmann Institute. Since 2020 he his Chair of the academic board of the Israel Science Foundation.

Examples for collaborations between research centers of the Helmholtz Association and the Weizmann Institute: