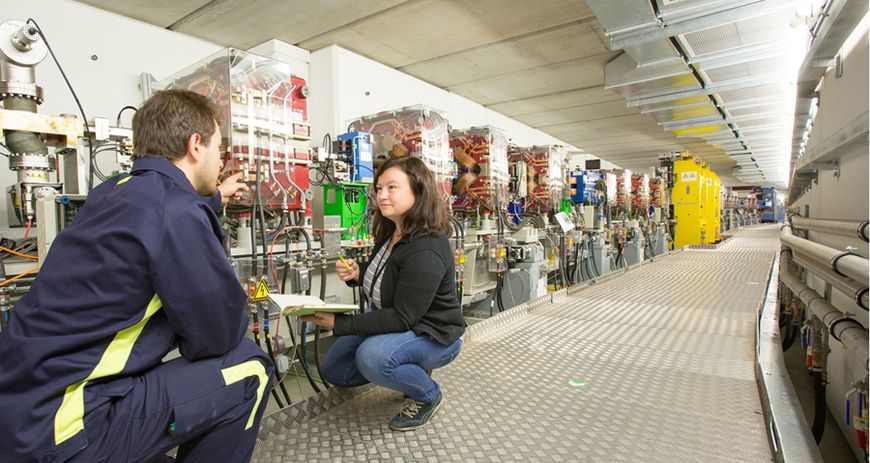 “It is not a matter of recycling old ballpoint pens”

Denise Völker is the first sustainability officer appointed at DESY in Hamburg. In her new job, not only has she learned a lot about physics, but also that the staff actually demand changes to promote environmental protection.

What she certainly does not want to do is to sit in her office on her own, coming up with great concepts that have nothing to do with the reality of working at DESY. “That would not help anybody,” says Denise Völker. That’s why she used the first few weeks in her job to have a look at the procedures in the different departments. Or as she herself says: “I did an internship everywhere.”

Denise Völker, 46 years of age, is the first sustainability officer at DESY. She was brought in to establish the concept of sustainability at the research center – and also to get the staff involved. “The term has been buzzing around the political arena for years,” says Völker. “But it was often no more than an empty phrase.” Her task now is to give it some real substance, flesh out the concept with ideas, targets, and demands. Denise Völker took up her new post at DESY at the beginning of March.

Right at the start, she accompanied the electricians on their maintenance tour through the tunnels of the particle accelerator. The men explained to Völker where they themselves felt there was potential for improvement. For example the magnets dating back to the 1970s, which are to some extent oversized for the task they are used for nowadays, making them inefficient. The magnets are now scheduled to be replaced during a technical upgrade. Sustainability certainly does not mean giving staff moral lectures, Völker says. “It’s much smarter to appeal to the electricians’ and engineers’ professional pride.” After all, the staff also want the accelerator to work to the highest level possible, and this means being efficient as well as reliable.

In retrospect, the first few months seemed like a short course in physics

Völker had little knowledge of physics before she started her new job. She graduated in landscape architecture and political science, and worked in the field of environmental protection for the past 20 years, ten of which were at Greenpeace. In order to better understand the accelerator facilities, which use large amounts of electricity, she bought herself a book called Elektrotechnik für Dummies (“Electrical Engineering for Dummies”) in her first week at DESY. What then followed in terms of conversations, queries, and discussions seems to her like a short course in physics when she looks back. She says: “Of course I will never understand every complicated experiment down to the last detail.” But well enough to be able to judge how the principle of sustainability can be achieved without hindering the research.

What surprised her most was how openly she was received. No matter who she spoke to, Völker says, her colleagues all indicated that they were not just interested in saving energy, recycling, and climate protection, but that they also really demanded these things. Because the time was ripe for action – in society, in business, and also at non-university research institutes like DESY.

Denise Völker relies on an exchange of ideas with other Helmholtz Centers. Experiences are shared and suggestions adopted in the joint working group, to which each Center sends at least one representative. For instance, at DESY Völker would like to implement the practice of automatically showing each member of staff who applies for a business trip how much carbon dioxide would be released as a result. “This wouldn’t involve a ban or coercion, but the information alone would definitely lead to one trip or another being canceled in favor of a video conference,” says Völker.

Every day on campus, she sees how seriously her colleagues at DESY take her role. No lunchtime in the canteen goes by without a staff member offering an unsolicited apology for using a paper cup or having ordered a schnitzel by way of exception. Völker usually has to grin. “Firstly, I am not a missionary. And secondly, I am actually on a break in that moment and would perhaps prefer to chat about the latest FC St Pauli game.” On the other hand, she says, the staff’s awareness is a wonderful sign. When Völker is around, her colleagues sometimes leave the car parked and walk across campus, even if it is a long way.

During her time at Greenpeace, Völker learned that it takes perseverance – but that improvements are very realistic. With her group, she imposed protected areas in the Amazon rainforest where the forest is not allowed to be cleared for soybean cultivation. She raised awareness of an old paper factory on Lake Baikal that was pumping unfiltered chemicals into the fresh water, and of industrial vessels owned by large corporations that were depleting the fish stocks off the coast of West Africa and stealing the livelihood of the local Senegalese fishermen.

During this time, she says, she also learned to withstand conflicts. “I was frequently insulted and told to go to hell. I can take it.” The hardest thing was when she was campaigning for the German book trade to ban the use of paper from the rainforest. For years she was ridiculed by the elderly gentlemen of the printing industry, some even refusing to shake hands with her. Nowadays, FSC certification is standard in the German book trade.

Of course she is an idealist, says Völker. She was already one when she was growing up in the Thuringian Forest. When the Gulf War began in 1991, she stood on the Old Marketplace in Schmalkalden and took part in a chain of lights. Probably nobody outside her home town noticed this, and certainly nobody in Iraq. “But I realized how important it is for me to take action.” Völker would not have accepted her position at DESY if she had not been convinced that her superiors took it seriously. She doesn’t want to serve as a form of greenwashing under any circumstances. There was this moment in the interview, she remembers, when the Administration Director asked: “Where do you see the specific need for action, Ms. Völker?” She replied: “I certainly won’t join your team if you are just going to settle for recycling old ballpoint pens in the future. We have to tackle the larger challenges.” “Splendid,” the director responded. Both of them realized that they thought along the same lines. At the end of the interview, Völker simply asked where her desk was. She wanted to start immediately.

Research institutes not only contribute to sustainable development through their scientific results. As a substantial part of the innovation system, as employers, and (to some extent) as publicly funded organizations, they also have the social task of dealing with their responsibility towards the environment, society, and their staff in their own research and operational processes. The Helmholtz Association has compiled a guide of best-practice examples from all 19 Centers.