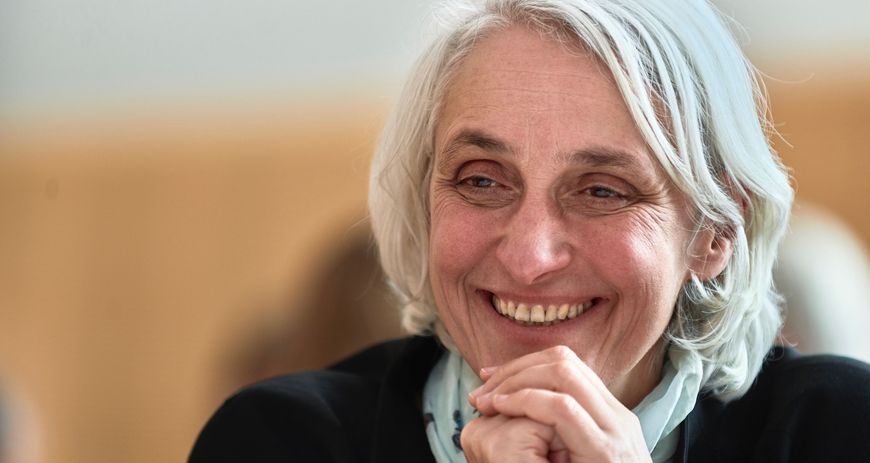 Although Ursula Bassler grew up in Germany, it is through her work in France that she has risen to become one of the most influential women in the field of particle physics. Her roots in both countries are useful in her work today.

The huge painting on the wall behind Ursula Bassler is bright red and almost three meters long. It shows a crocodile, a piggy bank, a wine bottle, eggplants, and all kinds of other objects scattered wildly across the canvas. The picture harks back to the 1980s and the beginnings of the story of this young German, who has made it all the way to this office on the executive floor of the French National Institute of Nuclear and Particle Physics in Paris (IN2P3-CNRS) and to the position of President of the CERN Council – a role that makes her something like the chairman of the organization’s supervisory board.

“At the time, I’d just graduated from high school and had gone to Paris to be an au pair for a year,” Ursula Bassler explains. Now aged 55, she laughs at the memory: “So, what do you do when you arrive in Paris at just 20 years old? You fall in love, of course!” This young love, who she met back then, was the creator of the red picture; and even though this relationship has long since come to an end, she still likes to look at the painting. At the time, the artist was the reason that she stayed in Paris and began her degree in physics there.

The story behind Ursula Bassler’s journey to one of the most senior positions in the field of particle physics is an unlikely one. It was pure intellectual curiosity that led her to focus on particle physics at an early stage in her degree – “it was an almost philosophical interest in this area,” she says. For nearly a decade after graduating, she collaborated from her laboratory in Paris on experiments at DESY in Hamburg and at Fermilab in the US. Her research was directed toward gaining a better understanding of the structure of protons and what is referred to as the “top quark” – the most massive of all known elementary particles. Looking back today, she says that working on the gigantic detectors in preparation for the experiments was one of the most exciting periods of her career. She then rose to become Deputy Director of France’s National Institute for Nuclear and Particle Physics (Institut National de physique nucléaire et de physique des particules). This organization coordinates and finances the research work of almost 20 laboratories working in the fields of particle, astroparticle, and nuclear physics, which are run jointly by the French National Center for Scientific Research (Centre national de la recherche scientifique, CNRS) and major French universities.

“When I was 16 years old, I actually wanted to do an apprenticeship as a lab assistant in the chemical industry,” she relates – but her older brother convinced her to do a degree. And so began the career of the one-time schoolgirl from a blue-collar family in the region of Europe where Germany, France, and Switzerland border one another. Even her justification for choosing a physics degree instead of following her interest in music and theater becomes an amazing anecdote in her own words: “I wanted to stay in Paris when my time as an au pair was over. And it seemed to me that it would be easier to study physics and mathematics in French than a humanities subject, where language would play a bigger role.”

Ursula Bassler was elected to the position of President of the CERN Council last year, with her candidacy receiving equal support from Germany and France. This unifying factor between the two countries, the two scientific systems, is something that has been close to her heart throughout her career. “While Germany’s universities are more independent, France puts greater emphasis on the national coordination of research,” she says, outlining the differences. This also means that scientists in France often have no teaching commitments, so they are able to dedicate themselves entirely to their research – “of course, this gives them great freedom, but it also has disadvantages, if only because interaction with students can give rise to new ideas.” Ursula Bassler herself now follows the debates on this issue from a greater distance. Since she moved into management around 10 years ago, she doesn’t have her own working group any more, but she regularly reads the latest publications to keep up to date with the research.

Despite her role at CERN, Ursula Bassler still has her office at the institute in Paris. It’s 15 kilometers away from her home in Versailles, and she usually rides there on her electric bicycle – “that way, you’re not affected by the strikes,” as she adds with the hint of a smile. She commutes to CERN once a week. But no matter where she is, she often thinks of home. “Sometimes, I’ll be traveling and I’ll call home to remind my husband to get our daughter’s gym bag ready for the next day,” she says. Her husband, a Frenchman, doesn’t travel for work as frequently as she does, so he often looks after things at home. Ursula Bassler explains that they started their family quite late, and their daughter is still in education – at a Franco–German school.

And is she following in her mother’s footsteps? No, says Ursula Bassler, she tends to take after her father’s side of the family: Veterinarian and artist are her dream jobs at the moment. And then Bassler looks proudly at her daughter’s sculptures, which now decorate her office. Her favorite is the clay owl. It sits right on the edge of her desk, next to her coffee cup and not far from the imposing red picture that reminds her of her early days in Paris.

Between September 2019 and February 2020 , Helmholtz's research was evaluated by high-ranking international experts. The strategic evaluation aims to review the strategic plans of the research field and to propose a basis for the distribution of funding among the programs. Ursula Bassler was chair of the high-caliber panel of international recognized experts.