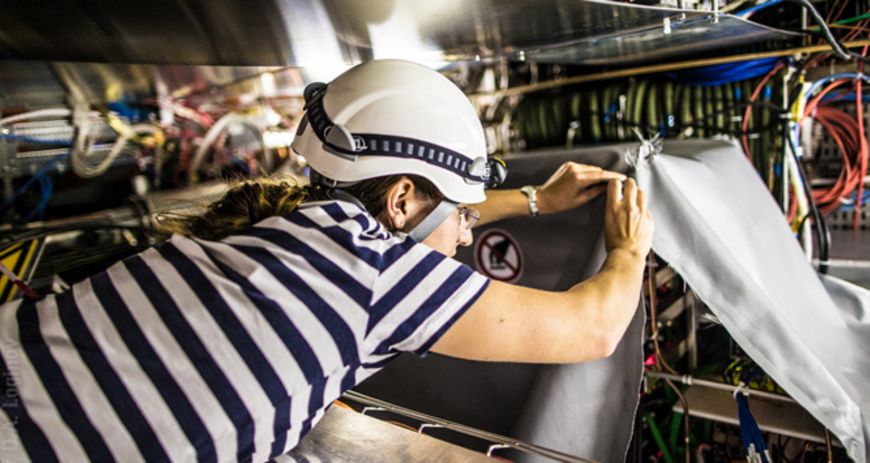 With the aid of the so-called Higgs bosons, physicist Sarah Heim is trying to find those particles which make up the mysterious dark matter in outer space. Starting in September 2016, she is setting up a junior-scientist research group at DESY in Hamburg specifically for this purpose.

For Sarah Heim, the lunar eclipse in July 2000 was a key event in her life. On this day the then 15-year-old discovered her passion for astronomy. To this day she cannot escape from the fascination of outer space. “You look up into the sky, see the stars and just want to know what’s out there,” says the particle physicist. The experience profoundly influenced her professional life: She, as the only female from her class, took “Physics” in the upper level and, parallel to this, started an internship programme at the Heidelberg-Königstuhl State Observatory. She was quite enthusiastic about the research scientists’ approach and methodology: “They collected information like detectives, thought logically about evidence and indications and then attempted to reach conclusions from their observations.” Later on she began her studies in physics at the University of Heidelberg and learned about particle physics as well in a lecture. “As opposed to astronomy, I was able to determine on my own here which initial parameters were to be included in an experiment,” the researcher remembers nostalgically.

After completing her undergraduate degree, Sarah Heim was anxious to see the world outside Germany. She thus went to Michigan State University in the Midwest of the USA – at first just for one year, in order to improve her English language skills. But she soon realized that the new location was very comfortable for her and she decided to enrol in a five-year PhD programme. For Heim, it was quite clear from the beginning that she would go to CERN (European Organization for Nuclear Research) for a research residence after completing her Master’s Degree. “Many American universities send their students there because of the particle accelerator.” So the young research scientist packed her suitcase once again and returned to Europe in 2009. As planned, she worked at the particle physics centre near Geneva and was busy with her PhD thesis involving the search for new heavy particles such as those that could also be responsible for gravitation. Three years later she accepted a position as postdoc at the University of Pennsylvania, but continued to conduct research at the Swiss CERN. Since 2012, she has been working there on data acquisition for one of the trace detectors. Furthermore, the particle physicist is evaluating the detector’s level of efficiency and how often it actually detects the electrons that pass through.

But it’s not only the visible part of the universe that fascinates her, but dark matter as well. This cannot be recognised with the naked eye, but scientists are nevertheless certain that it makes up a large portion of the material that surrounds us. The researcher aspires to tackle this riddle with the aid of special particles that have heretofore been invisible for most detectors. It is possible that they could arise during decay of the so-called Higgs boson particle, which was discovered in 2012 at CERN. In order to clarify this, Heim is also investigating their precise characteristics. Deviations from predictions could serve as evidence for the origination of dark matter.

The protons necessary for the decay experiment are accelerated in the LHC (Large Hadron Collider) – an underground tunnel about 27 kilometres long that stretches from Switzerland into France. They frequently pass through the border between the two countries during their circuit, and thus become cross-border commuters like Sarah Heim – even though the physicist is somewhat slower with her bicycle. This is her means of daily transport along a three-kilometre stretch from her flat in France to her research centre near Geneva. In September 2016 she plans yet another change of address; Heim will be establishing a junior scientist research group at Deutsches Elektronen-Synchrotron in Hamburg (DESY). Included in the 31-year-old’s research programme will be the continued search for dark matter and other so-called new physics with the aid of Higgs bosons and the ATLAS detector at the LHC. “A further aspect of my task will be to collaborate on the new trace detector for ATLAS.” This will presumably be brought on line in 2026. The particle physicist and her team thus have a full research programme over the next five years. Perhaps there is nevertheless time to supervise teaching events at the University of Hamburg. It means a lot to the research scientist to make young people enthusiastic about her subject. She has frequently supervised female-pupil workshops that take place every two years in Geneva. She worked as tutor for a summer academy for grammar school (Gymnasium) pupils and accompanied physics students at the Herbstschule für Hochenergiephysik. “I was lucky to be able to follow my aspirations, and would like to motivate young girls to study physics,” says Heim. “We’ll see how that idea develops more specifically in Hamburg.”