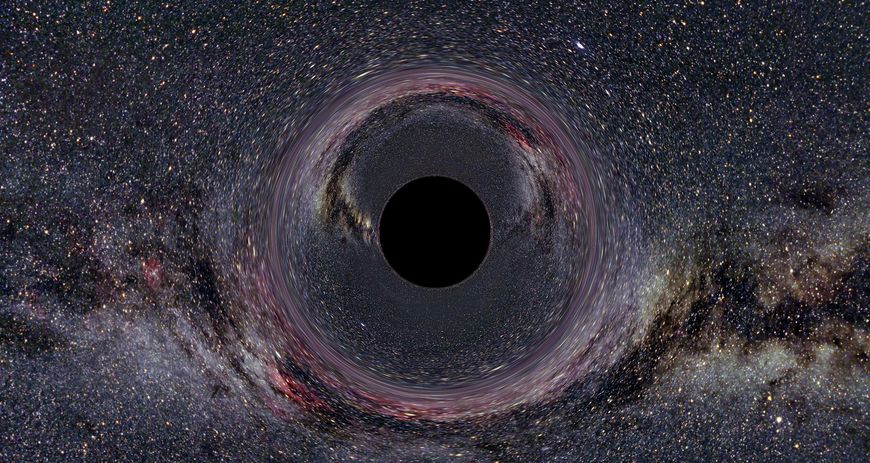 Simulation of a non-spinning black hole with ten times the mass of the sun as it would look from a distance of 600 kilometers. The Milky Way in the background appears distorted and duplicated due to the gravitational force of the black hole. Image: Wikipedia (CC BY-SA 2.5)

"Could a black hole swallow the Earth?"

Black holes have always been a source of fascination. But is there really anything to the legend that a black hole could swallow the Earth? Volker Schomerus, a quantum physicist at the Deutsches Elektronen-Synchrotron (DESY), knows the answer.

“We differentiate between two types of black hole, depending on their size: The first is small stellar black holes with only about ten times the mass of our sun. There are millions of them in our galaxy, the Milky Way. The closest known astronomical object of this kind is more than 1,000 light years away from the Earth. So we don’t need to worry too much about the Earth being swallowed by one of these small black holes. Even if our solar system were rushing straight towards one of them at the speed of light, it would take more than 1,000 years until the collision happened. The likelihood of directly hitting such a small astronomical object while moving at the maximum possible speed over such a long distance is very slim, however. The threat posed by stellar black holes is therefore extremely small.

The situation is different, however, in the case of the second category, known as supermassive black holes, one of which was recently photographed by scientists for the first time. We are well aware of their positions and movements. The risk is therefore predictable. We know, for example, that the galaxy closest to ours has a large black hole and that our galaxy, including the Earth, is on a collision course with this neighboring galaxy.

To illustrate this: If we shortened the lifespan of our solar system to one day, it would now be nine o’clock in the morning, homo sapiens have only existed for the blink of an eye and the collision is forecast for the early evening. Whether the collision with the black hole will actually happen – considering that it is only one part of this neighboring galaxy – cannot currently be predicted. But even if it does, human beings will not live to see it, as they will have already been wiped out long before it by the increase in temperature and expansion of the sun.