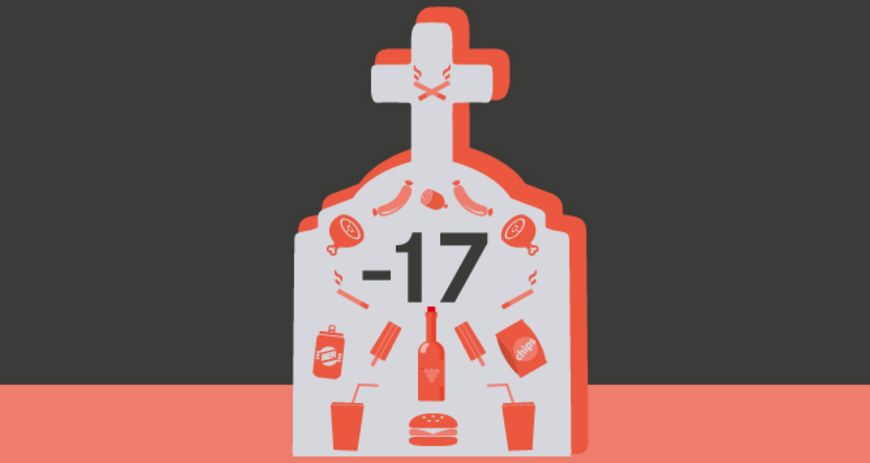 What is the price for an unhealthy lifestyle?

An individual who smokes and drinks a lot, frequently eats red meat, and is overweight lives up to 17 years less. These are the findings from a study conducted by the German Cancer Research Center. One of the co-authors explains how this number came about.

The investigation, upon which this number is based, has a strong reference to everyday reality. We were able to access data from just under 23,000 men and women for the survey. They were interviewed in reference to their lifestyle habits under the auspices of the European-wide EPIC study (European Prospective Investigation into Cancer and Nutrition) concerning the interrelationship between nutrition, lifestyle factors and cancer; specifically, information was collected regarding their alcohol and nicotine consumption, their eating habits, and/or their body weight. And then we observed the test subjects over a time span of more than ten years. Specifically, how are those test subjects fairing who live particularly unhealthy lives, i.e. smoke more than ten cigarettes per day, consume at least four alcoholic drinks per day, are furthermore overweight and eat lots of red meat? And how is the healthiest group doing – in other words, those who live in abstinence and with normal weight? Who has died in the meantime? With this information, we have developed lifetime curves, namely on the basis of a familiar mathematical model – the so-called Gompertz Curve. It depicts the mortality risk for each year of life. We had our study results fed into these curves, using the following method: on the basis of registered fatalities, and out of the findings obtained from secondary literature as well, we determined risk factors and estimated their effects. Accordingly, the mortality rate for a heavy smoker, for example, was increased by a factor of 3.5. From these risk factors, we deduced probabilities of survival. And from the curves between the healthiest and the unhealthiest cohorts, we derived on average a difference of 17 years life expectancy from the age of 40 – that is, for men. For women, it was a loss of 14 years. These values were frequently taken up by the media later on.