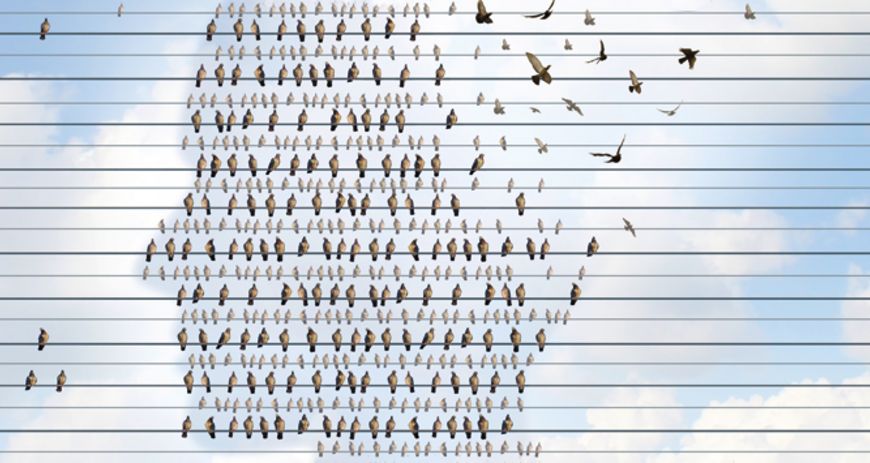 Biochemist Christian Haass conducts research on Alzheimer’s disease. For him it is crystal clear that the protein amyloid is what triggers the dementia disorder. Now he is concerned with being able to diagnose the disease early on. This is because treatment with antibodies is only effective in the early stages.

Herr Haass, dementia disorders such as Alzheimer’s are currently known to represent a huge challenge for science. Why?

On the one hand, we have the high number of afflicted patients. We currently assume about 1.6 million cases of dementia in Germany, of which the majority suffers from Alzheimer’s. In health care alone, but in the psychosocial sector as well, this presents our society with huge challenges. The problem will continue to grow because human beings are steadily increasing the average age of mortality. On the other hand, we are not yet able to cure this disease. We urgently need effective remedies.

What is currently known then about Alzheimer’s?

In the last 20 years, we have taken a major step forward in research on this disease. Contrary to the opinion of a few sceptics, the cause for the Alzheimer disease is crystal clear from our standpoint; it arises, simply stated, due to amyloid deposits in the brain. This protein is not transported away by means of normal metabolism in patients suffering from Alzheimer’s; rather, it collects in the brain, disrupts the transmission of signals there and leads to the death of nerve cells. For this reason, patients lose memory. The amyloid plaques thus cause the Alzheimer’s disease.

Amyloid is the cause that you are trying to combat?

Yes.  Amyloid is the trigger for the disorder. The protein is not the only source, but it plays an essential role. Research in this regard is definitely on the right path in their attempts to dissolve the amyloid clots on the nerve cells. Throughout our entire lives, we all produce amyloid. This is the cause for the extremely high risk for the elderly, since the amyloid is then evidently no longer properly cleared away – and accumulates. In Iceland and in Finland, there are families whose members have for generations lived very long lives – without developing Alzheimer’s or another form of dementia. These people have a genetic alteration that reduces the emergence of amyloid over the entire lifespan. This not only indicates that amyloid is the cause of the disease; rather, it also shows that a therapy that is targeted at a long-term reduction of amyloid will be successful. By the way, in family-inherited Alzheimer’s, precisely the opposite occurs – even more amyloid is produced and it coagulates even faster. This leads to the disease breaking out already in early years.

But Tau proteins have also been discussed a lot recently. Are there other causes in the brain that could be triggers for Alzheimer’s?

Yes, there are, but they are directly connected to amyloid. We hypothesize a cascade – first of all the origin is amyloid, which triggers the disease. Then the Tau proteins appear that are released by the amyloid, and these damage the cells.

So there are two causes for Alzheimer’s disease?

Well actually, everything together is the cause. The Tau deposits in an Alzheimer brain cannot appear without the amyloid. First of all the amyloid is there, then the Tau proteins arrive. Once the Tau proteins have started to coagulate due to the amyloid, however, they no longer need it and can also be lethal for the cells on their own. The Tau proteins then even begin to spread out through the brain. They wander from one cell to the next. If an antibody against amyloid deposits is found, it serves as a highly effective remedy against both causes. But the same is also true of the Tau antibodies.

Then why is there, after so many years, no cure for Alzheimer’s?

There are a few promising active ingredients. But the disease is particularly treacherous. It is established in the patient’s brain at least ten to twenty years prior to emergence of the initial symptoms. In most cases, the patients arrive for treatment much too late. At that point the amyloid plaques can in fact still be eliminated, but the cells at the affected sites have usually already died and are no longer regenerable. The disease is at this stage also no longer stoppable with vaccines. A recent study in the trade journal Nature has just shown that the disease can be almost entirely eliminated in a very early stage, and that memory can even be stabilised.  We all have great hopes for the future in this regard.

Why is it that the disease cannot be detected early on?

This does indeed work with imaging techniques that make the plaque visible. But since patients do not yet exhibit symptoms, they of course don’t show up early enough for the respective examinations. And then once they do come, it is usually too late for effective treatment.

That is still difficult to answer. In the daily routine, Alzheimer’s can hardly be diagnosed by the patient in the early stages. The fact that we would drive to the supermarket and forget after shopping where we parked the car is, for example, something that happens to everybody. That is nowhere near an indication for a dementia disorder such as Alzheimer’s. But when an individual drives to the same store every day, parks his car in the same place and then is not able to remember where the car is parked – that could serve as an initial indication. But then the disease is already potentially in an advanced stage. We lack corresponding biomarkers that reveal an early stage of the disease in the patient.

Are there other active substances that are promising in the battle against Alzheimer’s?

The best substances that are currently being tested are those that target the amyloid. This includes the therapeutic inhibition of the Beta-secretase. This is an enzyme that makes the first cut with which the amyloid is released. Double treatment has also been a really big discussion topic recently. A prestudy on animals that was presented a few weeks ago at a conference looks quite promising. I believe that this pathway can bring hope to people.

When will there be a comprehensive therapy, in your opinion?

Immunotherapy is currently in clinical phase III. This means that they have already made quite a bit of progress. But how long it will take before we have a drug can unfortunately not be predicted at all. These studies are extremely protracted, and initial possible side effects typically become apparent only in phase III. It is therefore not possible to give a specific time. But it is promising that we know we are on the right track. And even if side effects show up, this of course does not mean that an amyloid-based therapy is wrong, or even that amyloid would have nothing to do with the disease.

And now more and more examples of nuns are mentioned who have grown quite old, whose brains were full of amyloid plaques and who nevertheless did not die of Alzheimer’s. How can that be explained in your opinion?

Yes, this example has been mentioned again and again as an argument against amyloid research. But we don’t see any kind of contradiction in this. From our point of view, they were on their way to developing Alzheimer’s. Their brains had sufficient reserve capacity to conceal the effects from the disease, however. Regardless of this reserve capacity, the disease breaks out with some patients early on, and with others later on. Nuns, who most likely lived physically and mentally healthy lives, evidently had enough of this reserve.

So physical and mental fitness can slow down the progression of the disease?

Yes, by all means. As is the case with so many diseases, lifestyle plays a role with Alzheimer’s as well. Those who are physically and mentally active produce for themselves a better reserve against dementia than someone who isn’t active. This will not, however, cure the disease – it is possible to contain the symptoms a bit only for a certain time span.

Born in Mannheim in 1960, Christian Haass studied biology in Heidelberg. After a stay as a postdoc and assistant professor at Harvard Medical School, he returned to Germany in 1995, first to the Central Institute of Mental Health in Mannheim. In 1999 he received an appointment at Ludwig-Maximilians-Universität München. He is currently Institute Director at the Biomedical Center there and also represents the German Center for Neurodegenerative Diseases as their speaker - Deutsche Zentrum für Neurodegenerative Erkrankungen (DZNE). Haass has received numerous awards for his scientific achievements: among others, he was awarded the Gottfried-Wilhelm-Leibniz Prize in 2002, the MetLife Award in 2006 and 2015, an ERC Grant in 2013 and the Federal Cross of Merit in 2014.