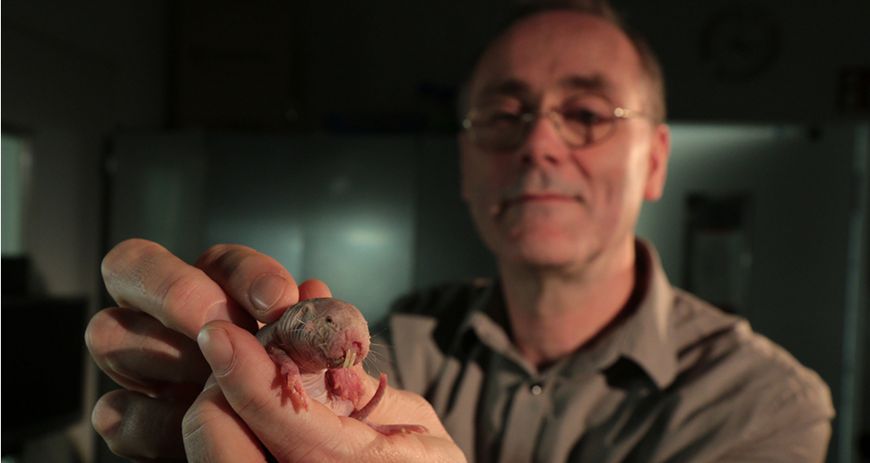 The origin of pain

In recent years, researchers have succeeded in understanding the development of pain right down to the molecular level. This facilitates totally new treatment approaches, with one of the most unusual animals on our planet playing a key role.

Here, one has to consider something extraordinary; something very special. Something that is not normal but rather extreme. And to learn to better understand that which is common, the norm, the most widely occurring. "In research, this approach often produces valuable new findings," says neurobiologist Gary R. Lewin, who is currently investigating the topic of pain in this very manner and, together with biochemist Brenda A. Schulmann, recently won the prestigious Ernst Jung Award.

Gary Lewin is a professor of neurobiology at the Max-Delbrück-Centre for Molecular Medicine (MDC) in Berlin. The subjects of his investigations weigh about 35 g and are approximately 10 cm long: mole rats. These are small rodents that do not have fur like mice but instead have only naked skin. Gary Lewin works exclusively with a single subspecies of mole rat that has a very specific characteristic: It feels almost no pain when exposed to a number of stimuli known to create pain and burning sensations in other organisms. This insensitivity to pain has given these creatures considerable evolutionary advantages, such as being able to live in places where other organisms cannot survive, e.g. in the immediate proximity of animals that give off pain-inducing substances for their own protection.

Prof. Lewin came across this amazing robustness in mole rats as early as 2008. He started to look for reasons as to why these animals feel hardly any pain at all, for instance when they come into contact with wasabi or chili. In the course of this work, he discovered a number of genes that appeared to be responsible for this phenomenon and – surprise, surprise – "when we blocked those genes, these animals suddenly became normally sensitive to pain," said Prof. Lewin. "Bingo! Like a switch being turned on." Of course, this begs the question of whether it would be possible to turn on such a switch in humans, but in the opposite direction, so they become less sensitive to pain? Could this potentially be a tool for developing new painkilling medications? "We are working on that," says Prof. Lewin with a smile.

But research on mole rats is only a small portion of the scientific work for which Prof. Lewin received the Jung Foundation’s Ernst Jung Award, endowed with 300,000 euros. He has also discovered a number of other fundamental mechanisms that have led to a better overall understanding of the sense of touch and pain perception. For instance, in 2007 he managed to decode the significance of the STOML3 protein: It is essentially a molecular basis for the sense of touch. So-called neuropathic pain, where patients perceive even the slightest physical contact as painful, might potentially be treated by blocking STOML3. A corresponding medication is already currently being developed.

However, the greatest advancements have been made in the clinical application of a discovery made by Prof. Lewin as far back as the 1990s. More than 20 years ago, he described in detail the role of the so-called Nerve Growth Factor (NGF). When inflammation occurs, the body’s own messenger is produced at an increased rate, thus enhancing pain perception. The first pain medications to be produced on that basis are now about to be approved. These consist of various antibodies that bind specifically to NGF, thereby blocking it. What Prof. Lewin did in those days was what is commonly called fundamental research; the very first thing needed was basic understanding. "It feels great to know that this approach has now produced a clinical application – and confirms that fundamental research in particular also leads to progress that eventually goes far beyond basic understanding," says Prof. Lewin.

"Ms. Schulmann has come up with new and highly innovative methods using her interdisciplinary approach in order to be able to better investigate the important Ubiquitin molecule," says Prof. Christian Maihöfer, Medical Director of the Department of Neurology at Fürth Hospital. He also considers the approach taken by Prof. Lewin to be quite clever: "It is fundamental science at the highest level – and furthermore, it is already of certain clinical significance. I can well imagine that in a few years’ time patients will also benefit from research on mole rats."

Prof. Gary Lewin of MDC agrees with this. That is why he has established one of the largest mole rat breeding facilities in the world in Berlin. He is convinced that, in particular, creatures that do not feel pain can reveal even more about pain to scientists. But that is not all we can learn from these little rodents by any means. Prof. Lewin has also discovered that mole rats can survive without oxygen for up to 18 minutes. "Lack of oxygen is the principal cause of many illnesses such as strokes and heart attacks," says Prof. Lewin. With his fundamental research philosophy, Prof. Lewin may well be laying the foundations for new therapies.

Pain free, thanks to evolution

Touch, pain and the strange sensory world of the naked mole rat