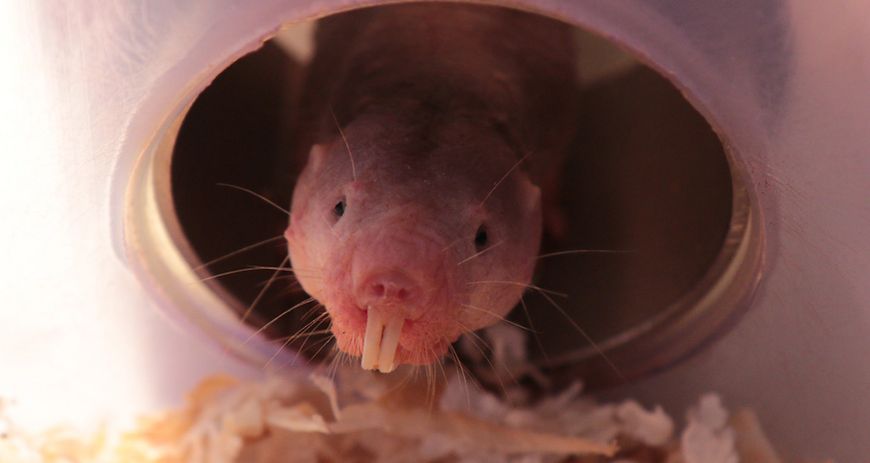 Naked mole rats have been developing protective mechanisms against cancer, strokes and heart attacks for millions of years. Without oxygen, they can survive for up to 18 minutes. All of this makes them highly interesting to scientists.

They are only 5 to 15 cm long, with a body weight of barely 50 g and if they were not naked they would hardly be distinguishable from other rodents, at least in terms of their external appearance. Yet, a closer look at naked mole rats reveals very special characteristics, which make these animals of considerable interest to science: they are not susceptible to cancer, they do not feel pain, and they can survive for long periods without oxygen.

"It is sometimes like doing research on aliens, that's how different naked mole rats have evolved compared to other mammals," says Thomas Park, a biologist at the University of Illinois in Chicago. Even though, genetically speaking these animals are nearly 94% identical to mice and humans.

The differences are already apparent in their cohabitation: naked mole rats are the only mammals that form a colony (like bees or wasps) that is headed by a Queen. She alone has the right to produce progeny together with one or two males from among the 300-some strong colony. All other animals in the colony dedicate their life to work. "That is just as unusual as is the fact that mole rats are cold-blooded animals. They are the only mammals that do not give off any body heat," says Gary Lewin from the Max Delbrück Center for Molecular Medicine in the Helmholtz Association (MDC). Presumably, both characteristics have evolved for the same reason: these animals have adapted optimally to their environment.

Naked mole rats live in large underground burrows in the semi-deserts of East Africa. "The temperatures there are prevalently stable so that adjustment to temperature changes is not necessary, and indeed would require the expenditure of energy," says Lewin. Beyond that, these animals must conserve energy because the underground conditions in the semi-desert are difficult and energy draining. Naked mole rats often dig tunnels that extend for kilometers in search of nutritious roots, without being aware of the actual direction. "Presumably eusociality-that is, the formation of a colony-has prevailed as the most efficient life form under such circumstances," says Lewin.

Such high degree of social behavior pays off for these animals only because they live for a long time. In fact, they can reach a longevity of up to 34 years, which is indeed a respectable age for animals of their size, keeping in mind that mice rarely get older than three years. "Otherwise, such social behavior would not make any sense; after all, the ability for renewal of the colony is very limited when only one female produces progeny." One of the reasons for such longevity is that naked mole rats are not susceptible to cancers. As early as 2013, scientists from the University of Rochester, in the state of New York, have demonstrated in a study published in Nature that the skin cells of these animals produce a special kind of hyaluronic acid. This acid has unusually long molecular chains that are being deposited in large quantities among connective tissue cells and so block signals that would be required for cancerous growth.

Immunity to cancers, colony–forming and cold-blooded rodent: that, by itself, should already be sufficient to elevate the heartbeat of medical and biological researchers. Several years earlier already, MDC researchers in Lewin’s team had observed that these animals are also largely immune against inflammatory and acid-induced pain. In humans and in mice, this pain, which can be compared to a splash of lemon juice into an open wound, serves as a warning in order to prevent further injuries. “Whereas naked mole rats have developed an acid tolerance,” says Lewin, “presumably because the oxygen level is low in those tunnels and caves where they live, and at the same time the carbon dioxide level is very high; this would, under normal circumstances, lead to hyper acidity of the tissue, yet moles rats must be able to live under those conditions.”

For that to succeed, naked mole rats have pain receptors with a special characteristic: their sodium channel is being blocked by positively charged particles given off by the acid. Because of this blockade nerve cells do not conduct pain signals. “Since pain receptors in mole rats are otherwise rather similar to those found in humans and mice, we hope that this knowledge can be used in the control of chronic pain in humans,” says Thomas Park.

Jointly with colleagues at the MDC he has recently made a further discovery that is relevant to medicine: while a human needs an oxygen level of at least 10% in the air that he or she breathes in order to be able to generate sufficient energy for survival, naked mole rats can readily get by on 5%. The researchers terminated their experiments after five hours because the naked mole rats showed no effects whatsoever under such low oxygen concentrations.

Even more impressive were the results of the following experiment: the researchers tested the animals’ ability to survive totally without oxygen. They observed that mole rats appear to be totally unaffected by a complete lack of oxygen for up to 18 minutes. For humans that would be totally inconceivable: “Even with an oxygen level of five per cent we can last no longer than five minutes without suffering serious damages,” says Park.

Together with his team, he observed that the animals became comatose after approximately 1 ½ minutes when they had to survive without oxygen. In that state, the animals stopped all movements and reduced their respiratory frequency and pulse rate, yet the brain continued to function, although at a somewhat lower capacity. As soon as the naked mole rats were able to resume breathing they would wake up again. Even after 18 minutes without oxygen they fully survived without displaying any residual damage.

This becomes possible due to a change in the animals’ metabolism: “If there isn’t enough oxygen to metabolize glucose the animals switch to fructose,” says Park. Although many mammals can utilize fructose, but usually only in their kidneys and liver, yet, naked mole rats can do that also in other organs of the body.

Researchers hope that, in the future, this mechanism can save human lives: “We would like to protect patients against the consequences of oxygen deficiency that can be caused by a myocardial infarction or a stroke within minutes. This would indeed be conceivable because theoretically only small modifications would be required for the body to be readjusted to fructose metabolism,” says Lewin.

Beyond that, it appears that humans can learn a lot from naked moles rats. After all, naked mole rats, as genuine survival artists, have—over millions of years—developed protective mechanisms against cancer, stroke, and myocardial infarction, three of the most common causes of death among humans worldwide.

Maybe that is one of the reasons why Park and Lewin meanwhile have started to consider these rodents—once chosen as the ugliest animal in the world—now to be actually quite cute.