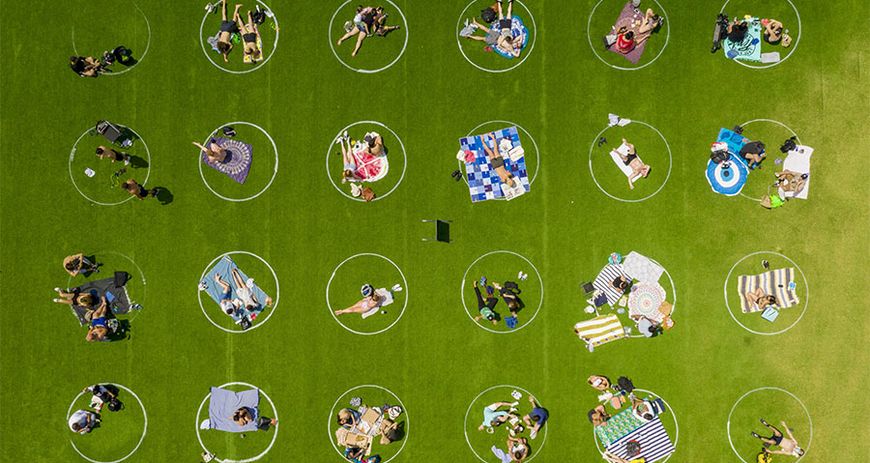 It almost feels as if we’ve been in standby mode. While research on SARS-CoV-2 has been pushing forward at full pace in recent weeks, the virus has brought life as we know it to a standstill in dramatic fashion. And here in Germany, it has only restarted in a very careful, cautious way. One thing is for certain: The coronavirus crisis is set to be part of our lives for a long time to come. And it’s likely to permanently change the relationship that science shares with society and politics.

There’s no question that Dirk Heinz is happy to receive the letters and e-mails arriving en masse at the Helmholtz Centre for Infection Research (HZI) in Braunschweig: The messages exude pride; so many citizens are proud that their region is home to a research center like HZI. Heinz is scientific director at HZI, and after mentioning this sense of pride, he is quick to follow up with a word of caution, emphasizing how important it is that letters like these don’t cause academia to overestimate its own role. “The work researchers are doing has to be absolutely reliable; we can’t get involved in speculation.”

This is a difficult balancing act, as Heinz describes it. Rarely have the hopes and expectations placed on researchers been as weighty as they have been during the coronavirus pandemic. Everyone is perfectly aware that without research, without scientific institutions, there won’t be any drug or any vaccine.

“Society’s acknowledgment of the importance of science had waned somewhat over the past 20 or 30 years,” says Armin Grunwald, but notes, “It’s increasing again now.” Grunwald is a physicist and philosopher who heads up the Institute for Technology Assessment and Systems Analysis (ITAS) at the Karlsruhe Institute of Technology. His work has been addressing the interactions between technology, research, and society for a number of decades. Grunwald predicts that the coronavirus crisis will have a significant impact on this three-way relationship.

First, Grunwald says, the situation is acute: “In the case of climate change, policymakers know the issue won’t reach its climax in their lifetimes—so they are just reinforcing the levees a bit and leaving the rest to the next generation. But coronavirus is a completely new type of problem.” As little sense as it makes to put off the climate crisis, that simply isn’t possible with the pandemic. It demands an immediate response, and every mistake swiftly has its revenge. But what does this mean for science? “It’s vital that our work is just as interdisciplinary here as it is in so many other different fields. Listening to virologists isn’t enough—we now need social scientists, behavioral psychologists, economists, and many other specialists as well,” says Grunwald.

Second: Society has to tolerate the fact that scientists are unable to deliver a panacea—and also, that science may present opposing viewpoints and recommendations in some cases. “In the context of technological impact assessments, we refer to this as an expert’s dilemma.” Grunwald says this can be explained by the way research works: “Our knowledge is reflected in textbooks, and it represents a stable knowledge base in this case—but one that’s dated. We draw conclusions from events and observations that lie behind us. Scientists are first and foremost experts on the past.” According to Grunwald, the coronavirus pandemic represents a completely new type of situation—which means science will only be able to answer the many questions that are arising with certainty after months or years have passed. But which scientists are finding an audience—is it still just those with the most headline-grabbing hypotheses? 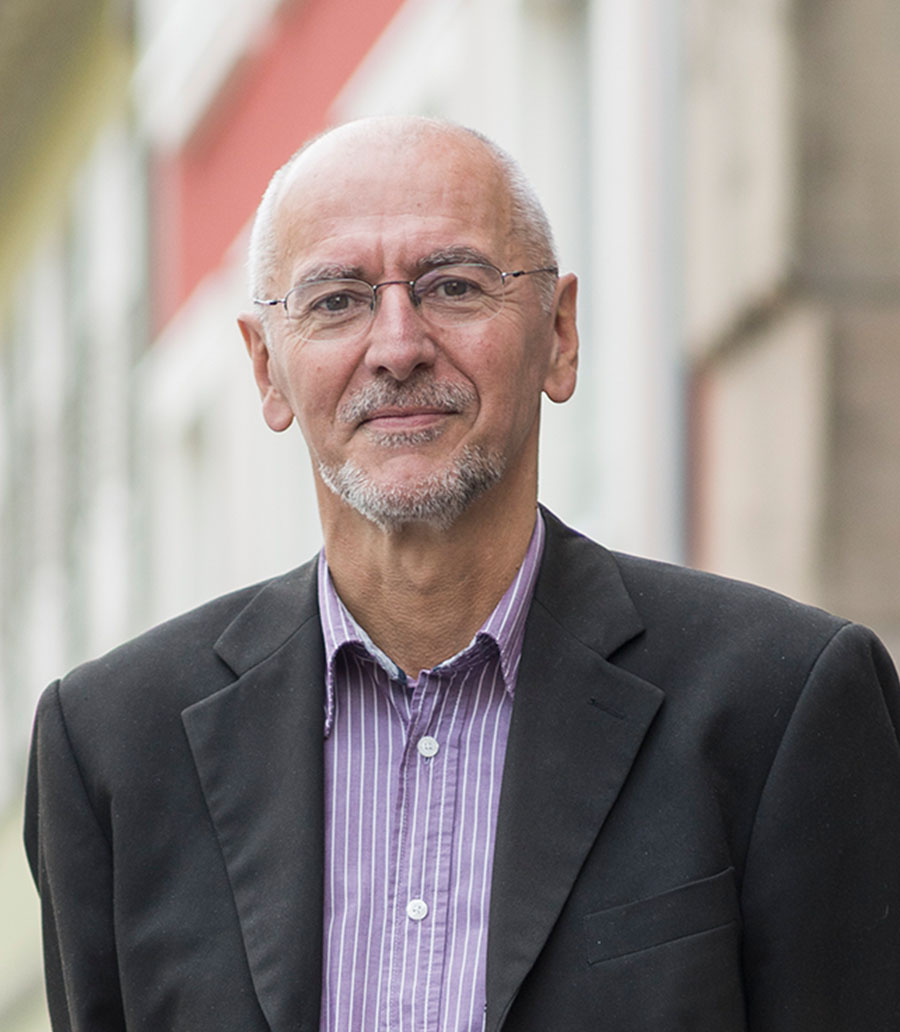 “Working on an interdisciplinary basis is key here. Listening to virologists isn’t enough.”

And finally, Grunwald says he can’t help but feel there is a parallel with a study that he recently oversaw as head of the Office of Technology Assessment at the German Bundestag. That scenario looked at what would happen if there was an extended power outage in Germany. “The consequences would be disastrous because so many areas of life rely on technology and on digital control systems—and they would fail completely.” He sees a parallel between this scenario and the current situation surrounding coronavirus. He criticizes the fact that “there aren’t enough plan Bs”: “We are a society that lives from hand to mouth. When we’re hungry, we go and buy something, while at one time, everyone had a pantry. The only thing I find surprising is that this is obviously true of our economy as well. Many companies don’t have any buffer left at all after just a few weeks.”

He notes that digitalization has shown it offers tremendous benefits during the coronavirus pandemic—“suddenly, many things are possible that weren’t an option for years prior to this,” Grunwald says with respect to the many people working and learning from home. The researcher believes that some of these changes will undoubtedly remain when the pandemic is over. “But we also recognize that digital options are only a replacement. They work well for some things but are completely insufficient for others.”

One Helmholtz researcher who is taking a close look at the societal impacts of the coronavirus crisis is Katrin Amunts. The neuroscientist from Forschungszentrum Jülich served as Vice Chair of the German Ethics Council until her second term ended in April. One of the questions she focuses on is how uncertainty affects people. After all, the predictions on how long the crisis will last vary significantly—ranging from a few months to several years. Will the coronavirus pandemic lead to changes in our society? “My personal impression is that it will,” says Amunts, “and I think a lot of other people feel the same.” She says this will reveal just how vulnerable our way of living is, but the crisis could also present an opportunity to strengthen our country and society over the long term. “We’ll know what we can get through together,” she believes.

Amunts was at the forefront of the Council’s preparatory work when it published an ad-hoc recommendation entitled “Solidarity and Responsibility during the Coronavirus Crisis” at the end of March. This move was prompted by the government, as Germany’s minister of health requested that the Council assess the pandemic and its consequences for society. Two dozen high-profile experts are part of the Ethics Council; they work in a variety of fields including philosophy, law, and theology as well as medicine of course. The Council develops opinions and recommendations on a wide range of topics. And did the best way to deal with coronavirus become the subject of controversy behind the scenes? “The Council’s members naturally have different perspectives, and this sometimes leads to heated discussions,” Amunts says diplomatically. The Ethics Council’s paper provides points of reference for the fight against coronavirus—and also incorporates science in a tangible way. It expressly urges that “interdisciplinary research provide support for social, psychological, and other effects.” And the authors also highlight the boundaries of science: “Delegating political decisions to science and demanding that it provide clear instructions for the political system would be contrary to the basic principles of democratic legitimacy,” they assert: “Painful decisions in particular have to be made by the organs that have been mandated to do so by the people.”

Dirk Heinz from HZI in Braunschweig has a clear idea of the contribution science can make during the crisis—and what it may not do. First on his list: “Researchers have to ensure that their communication is based on facts. They should refrain from drawing political conclusions.” For example, the assertion that coronavirus measures were relaxed too early is one that should be left to the discretion of policymakers rather than scientists.

“We have forgotten that we are vulnerable to viruses and infections because they had ceased to play a major role thanks to medical advances.”

Heinz advises similar restraint in contact with politicians: “We shouldn’t make promises that research can’t keep,” he says, advising that the key is to “underpromise and overdeliver.” But how can researchers cope with the tremendous pressure of society’s expectations that a drug or even a vaccine will be delivered as quickly as possible? Ultimately, the pace they would need to work at contradicts the highest scientific principles, which are concerned with careful testing and collecting data in a traceable way. No, Heinz says, these principles can’t be jettisoned to achieve quicker results. Instead, he thinks it’s helpful that working groups from around the world are working together so closely right now, that even teams at competing pharmaceutical companies are collaborating directly—and he says this is what it takes to achieve a rapid result while maintaining all the relevant scientific standards. “Pursuing many activities in parallel can significantly expedite the knowledge acquisition process,” Heinz says. And on top of this, experiences from this phase could help the open-access principle to achieve a breakthrough.

When it comes to the long-term impacts that coronavirus will have on science, Dirk Heinz, the structural biologist, and technology assessment specialist Armin Grunwald are in complete agreement: “We have forgotten that we are vulnerable to viruses and infections because they had ceased to play a major role in the western world in the twentieth century thanks to medical advances,” concludes Heinz, predicting that the field of infection research is set to experience a renaissance. Grunwald takes it a step further: “Right now, we’re experiencing first-hand just how crucial preventive research is. After this, it won’t work to sit back and put off various critical issues on the premise that ‘It will never happen to us!’” He says this experience will shape research policy in a lasting way for years to come.