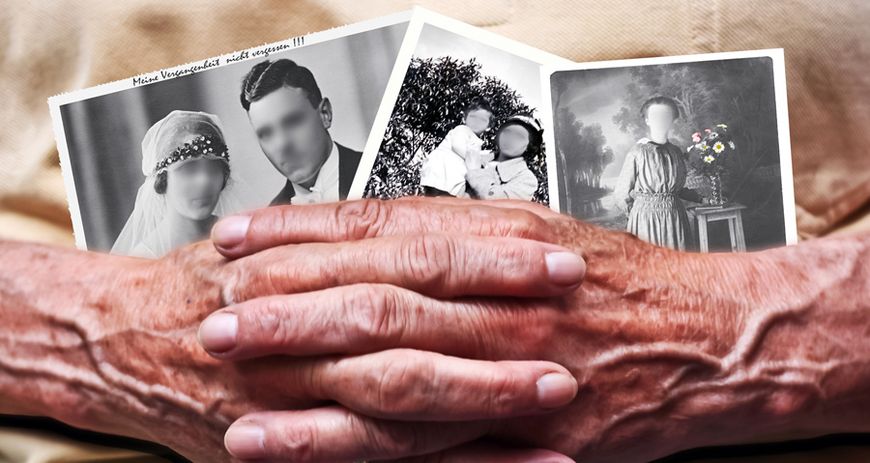 The battle against oblivion

No longer recognizing loved ones or losing treasured memories – hardly any other sign of aging scares people more than forgetting. Researchers are trying to explain the molecular causes of Alzheimer’s disease and thereby find the key to a treatment.

"There is Alzheimer’s in my family. How likely am I to develop the disease? Can I do anything to prevent it?" These are questions patients frequently ask Anja Schneider during consultations. Schneider is a researcher at the German Center for Neurodegenerative Diseases (DZNE), and since she is also Director of the Clinic for Neurodegenerative Diseases and Geriatric Psychiatry at Bonn University Hospital, she is often in contact with patients and their concerned relatives. She can only help to a limited extent using medications that tackle the symptoms. Therapies that could stop the disease process do not exist yet, but: "We are noticing that people are going to the doctor much earlier nowadays," she says – an indication that word has spread of the threat posed by the disease that now affects around two thirds of the 1.7 million dementia patients in Germany alone.

Researchers are working on finding the causes of Alzheimer’s – from psychiatrists to neurologists right through to biochemists, scientists are addressing this issue. At Helmholtz alone, teams from numerous Centers are researching this subject; the DZNE, which was founded exactly ten years ago, brings together a particularly large number of resources. "For me, it is especially important that research fields that would otherwise not come into contact with each other are networked at the DZNE," says Anja Schneider: "This ranges from clinical research to fundamental research, and for me it is always particularly fascinating to go to the regular meetings and see how much progress colleagues have made." Because even though scientists have solved some of the mysteries of Alzheimer’s in recent years, exactly what happens at the molecular level is still unclear. All of the active substances researchers had hoped to develop a treatment from to date have failed, at the latest by the clinical trials stage, i.e. when they were being tested on patients.

One thing is certain: It is primarily older people over the age of 65 who develop Alzheimer’s. As the disease progresses, the brain becomes increasingly damaged. Physicians differentiate between two forms of Alzheimer’s. The highly aggressive familial form, which is caused by three currently known gene defects, is very rare. The so-called sporadic form occurs much more frequently. In both cases, the brains of patients show two striking pathologies: Firstly, they all have accumulations of proteins, so-called plaques. The most important component of these clumps is a protein fragment known as amyloid-beta; it is suspected of killing off surrounding nerve cells. The second striking common feature: Inside their brain cells, mutated forms of so-called tau proteins are deposited in the form of fibers, or tau fibrils. This causes the cells to lose their shape and function and eventually to disintegrate. There are numerous hypotheses on how the two phenomena are related and what ultimately causes the onset of Alzheimer’s, but they are often as yet unverifiable.

All people produce amyloid-beta – but they are better able to break it down when they are younger. As a person grows older, the concentration of these protein fragments increases, along with the likelihood of developing the disease. What scientists do know are the factors that reduce the risk of the disease occurring. "What keeps the body healthy also keeps the brain healthy", as Thomas Willnow from Max Delbrück Center for Molecular Medicine in der Helmholtz Association (MDC) in Berlin succinctly puts it. He is head of a team that is involved in molecular cardiovascular research. The link between this subject area and Alzheimer’s is closer than it first appears: "Conditions such as severe obesity or diabetes not only entail complications for the cardiovascular system," Willnow says. "They are also one of the main risk factors for neurodegenerative diseases." According to a study, diabetes patients are three times more likely to develop Alzheimer’s, and elevated cholesterol levels not only damage the heart but also the brain. These striking correlations fascinated Thomas Willnow right from the very beginning of his research career – since then he has been tracing them in greater detail at the molecular level.

"If you lose half your nerve cells as a result of Alzheimer’s, you will be better able to deal with the situation if you have trained the other half well."

One particular protein has proven to be crucial, acting as a carrier in the metabolic processes, including transporting cholesterol and other lipids from cell to cell. It is called apolipoprotein E, or ApoE for short. All people have this ApoE and it occurs in one of three variants that only differ due to a single amino acid element: ApoE-3 is the common, "normal" variant of the carrier, but the ApoE-4 type occurs in about 15 percent of people – despite this relatively small proportion it is found in about 40 percent of patients with Alzheimer’s. ApoE proteins can bind with amyloid, i.e. the protein considered to be the cause of Alzheimer’s. Can ApoE-3 bind with amyloid more effectively than ApoE-4 or does ApoE-3 play a protective role in the brain’s cholesterol metabolism, which ApoE-4 does not? These are currently some of the main issues in Alzheimer’s research.

One thing is already clear to Thomas Willnow: Anyone can take preventive action against Alzheimer’s, since, in addition to the genetic causes, the disease also has its roots in human behavior. For a start, Willnow recommends training one’s memory: "If you lose half your nerve cells as a result of Alzheimer’s, you will be better able to deal with the situation if you have trained the other half well," he says. Secondly, he recommends leading a healthy lifestyle, thus avoiding risk factors such as obesity, for example.

Dieter Willbold, who is a researcher at Forschungszentrum Jülich and at Heinrich Heine University in Düsseldorf, starts from a different point in the development of Alzheimer’s. He is an expert in structural biology and is investigating what are known as prions. The term is derived from the words "protein" and "infection" and was coined by Stanley Prusiner, who was awarded the Nobel Prize in 1997 for the discovery of prions. The main idea here is that some proteins do not have a defined three-dimensional structure – and one of these proteins is amyloid. "Proteins that lack a fixed structure, in particular, can evidently join together and form aggregates," says Dieter Willbold. "These aggregates, which are also known as oligomers, can assume a different, toxic role. Many protein aggregates are also described as being able to propagate: If a misfolded protein encounters a “normally” folded and non-hazardous protein, it can assimilate the latter." This is how prions propagate.

His hypothesis regarding the development of Alzheimer’s is linked to this: The higher the concentration of normally folded amyloid in the body, the greater the likelihood that hazardous aggregates will form – and as soon as this happens, it is no longer possible to stop the propagation of prions. At some point, the damage to the brain is so great that the disease manifests itself. At least that has been the case until now. At this point, Dieter Willbold hopes to introduce an active substance. The first phase of clinical trials for this was completed at the end of March. The substance is called PRI-002, and it has already shown in the laboratory and in tests on mice that it can disperse hazardous prions. Priavoid GmbH, a spin-off company from the University of Düsseldorf and Forschungszentrum Jülich, is now continuing the trials. Since the active substance is introduced at a completely different point in the course of the disease, compared to previous medications where the clinical trials have failed, Dieter Willbold is optimistic: If his hypothesis is confirmed and amyloid-beta prions are in fact the cause of Alzheimer’s, his active substance will work; he is firmly convinced of this: "We describe it as an antiprionic, analogous to an antibiotic," says Willbold.

And there are other research initiatives. Anja Schneider from the DZNE in Bonn hopes to find biomarkers in the blood that will allow neurodegenerative diseases such as Alzheimer’s to be identified at a very early stage. Using methods such as the so-called amyloid PET scan, hazardous amyloid plaques can already be detected in the brain at an early stage – but to do this, patients have to be injected with a radioactive substance. "The current early detection methods are therefore not suitable for mass screening purposes," says Anja Schneider. She is focusing on so-called extracellular vesicles: These are carriers that transfer proteins from one nerve cell to the next – in the case of Alzheimer’s and also Parkinson’s, the disease is potentially spread in this way.

In addition, Anja Schneider is currently carrying out a clinical trial involving a drug called Vorinostat: It is approved in Canada for treating cancer but causes severe side effects at the dosages that are used, ranging from acute nausea to the formation of blood clots. The same active substance was able to improve learning and memory and to inhibit pathological changes in Alzheimer’s studies on mice, as André Fischer from DZNE Göttingen discovered. Schneider is therefore currently carrying out a study to clarify how big the dose needs to be for the medication to help Alzheimer’s patients, while at the same time limiting the side effects as much as possible.

Thomas Willnow, the researcher at Berlin’s Max Delbrück Center, sighs when you ask him about the state of Alzheimer’s research. Scientists all over the world have been working frantically on the subject for much more than a decade "but the fact is that we still cannot cure Alzheimer’s. In this respect, it is pointless to ask whether the glass is half full or half empty." His interim assessment is positive, however: Researchers already know so much about processes on a molecular basis that they can approach the disease from different sides. "I don’t believe there will eventually be a magic pill that cures Alzheimer’s; after all, it is ultimately an aging process of the brain," he says, "but with a combination of drug-based therapies and an improved lifestyle, we will hopefully be able to further delay the onset of dementia."