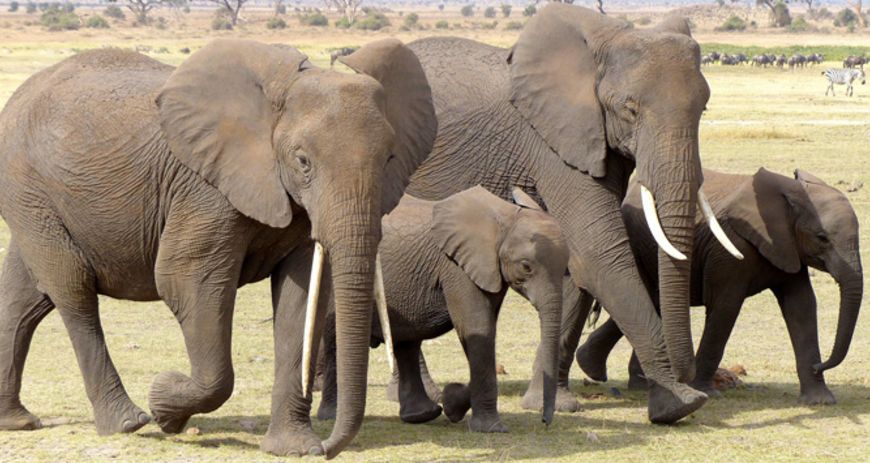 Resistance to cancer in elephants – inspiration for human medicine?

Elephants are rarely afflicted with cancer. Scientists have now discovered what it is that protects these thick-skinned creatures – they possess many copies of the gene p53, which plays an essential role in the appearance of cancer. Is it possible that an overdose of the p53 gene could also protect humans from tumours?

Each year about 475,000 individuals in Germany are afflicted with cancer, and despite huge advancements in medicine, every fourth fatality can still be traced back to cancer. The pathologies are as varied as the involved individuals. All cases have in common the fact that cells with damaged or modified DNA begin a cycle of uncontrolled reproduction. Thus a tumour emerges.
Cancer is also a frequent cause of death in the animal kingdom. And the bigger an animal is, the more probable the emergence of a tumour is, because the body consists of an immense number of cells – or one would assume. Two research teams in the USA have actually shown just the opposite to be true. Joshua Schiffmann and his team have published results from a study on elephants that proves an astoundingly low risk of cancer – accordingly only every twentieth elephant dies from a tumour. That body size and risk of cancer do not correlate in animals had already been known in the 70s. This phenomenon, known as Peto’s paradox, led the geneticist Vincent Lynch to the idea of examining the developmental history of the elephant regarding its resistance to cancer. At the same time as Schiffman, Lynch and his team published data that indicate the evolution of a mechanism in elephants that is explicitly targeted to prevent the formation of tumours.

p53, the guardian of the genome

At the centre of the issue regarding control of modified cells that are consequently at potential risk of developing cancer, we find the protein p53. It is constructed the same way in all heretofore examined mammals – from the mouse to human beings to elephants – constructed the same way and active in the same functional interaction.  The number of p53-coded genetic copies that are to be found in the elephant genome is unique. While humans as well as most mammals possess only one copy of the gene (one each maternal and paternal allele), the elephant has at least 20 copies.
Previously celebrated as the “guardian of the genome” and “molecule of the year 1993”, a central role in regulation of the cell cycle is attributed to p53. It activates genes that control the cell cycle, that are involved in DNA repair, or which lead to cell death. If multiple DNA-damages occur in tissue, for example due to radiation effects or chemicals, production of p53 is highly regulated, i.e. degradation is diminished and the impaired cells are eliminated. “Additional copies of the p53 gene appear to be linked to certain protection against cancer,” explains Thomas Hofmann from the German Cancer Research Center in Heidelberg. Corresponding observations have previously been made of transgenic mice, among others. And it is really true – in elephant cells after DNA damage, considerably increased activity of cell-death-induced proteins were detected in comparison to healthy human cells.

Ageing as a selective advantage – but unfortunately only in elephants

Why does a mechanism develop that turns off cells, selectively, at a high risk of acquiring cancer - specifically for elephants? The answer could lie in the grey behemoths’ reproductive biology. Elephants have about the same life expectancy as human beings; however cows can have offspring until the end of their life. The dedication of many years of rearing and nurturing to each offspring is quite considerable, and with age – thanks to the mother’s experience – the calf’s survival rate increases. This leads to strong evolutionary pressure to grow old, which is benefited by the development of life-extending protective mechanisms. For human beings, conversely, the reproductive phase is already completed after the first half of life, thus it is not perceived – in a purely biological sense – to be expedient for the mother to invest her time and effort in further cancer suppression.

Opportunities for development of therapies

The discoveries connected to p53 offer several approaches for the development of therapies. “The elephant results have shifted the protein back into focus,” says Hofmann. “After all, p53 is the most frequently mutated gene in tumours.”  An option that research scientists are currently pursuing involves blocking the degradation. But this is not very easy, explains Hofmann. An increase in the p53 level would indeed lead to increased suicide in tumour cells, but would have undesirable side-effects. One of these is the accuracy of the treatment. As is the case with other therapies as well, there is a danger that healthy cells – particularly the highly-sensitive cells in the immune system – would also be killed off, which additionally diminishes the patient’s immune system.

But not every mutation in p53 leads to complete failure. Frequently the protein is merely folded improperly and is not capable thereby of fulfilling its tasks. In such cases, there is a promising therapeutic approach that involves rehabilitating the functionality of the protein by selectively folding back the 3D structure. But some time will pass before a clinically-proven therapy emerges from these approaches.