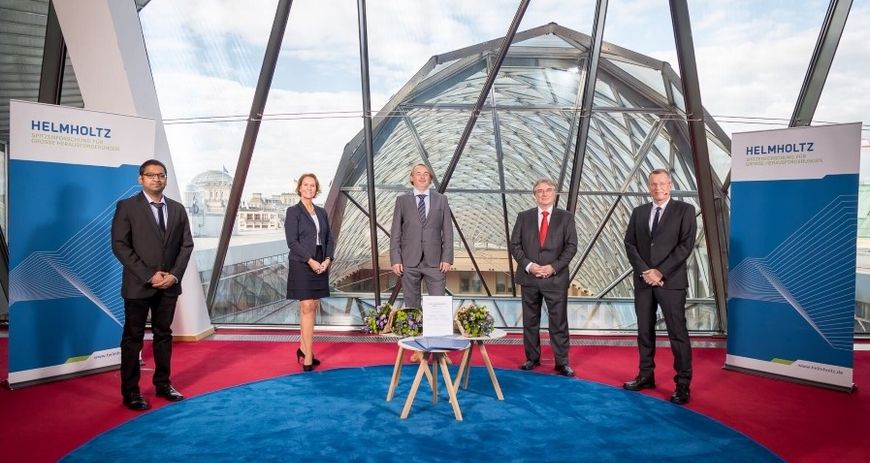 Millions of people fall ill each year with the parasitic diseases African sleeping sickness, Chagas' disease and leishmaniasis. Researchers have now discovered a new weakness in the parasites and developed an active substance that kills the pathogens. For their interdisciplinary work they were awarded the Erwin Schrödinger Prize 2020 at the Helmholtz General Assembly.

Tropical diseases such as African sleeping sickness, Chagas disease and leishmaniasis are spreading faster and faster around the world. Those affected suffer from fever and skin changes, for example. In chronic conditions, certain organs become enlarged and the gastrointestinal tract is increasingly paralyzed. Treatment is difficult for all diseases, and they can even be fatal under certain circumstances. "There are currently no good treatment options: Either the drugs available are very toxic or not effective enough. We wanted to do something about this," says Grzegorz Popowicz from Helmholtz Zentrum München, as he opens the door of the institute's own NMR spectrometer and adjusts a sample tube. Proudly he steps down from a small kick and beams: "That's why we are very happy that our years of work are bearing fruit and that we are even being rewarded for it.

Millions of people worldwide are affected
Grzegorz Popowicz is part of a research team that is intensively studying these tropical diseases, which are caused by three different but related parasites - the so-called trypanosomes. It is estimated that 20 million people are affected: According to the World Health Organization (WHO), more than six million people are infected with Chagas disease alone - mainly in Central and South America. There are around 15,000 deaths every year. But the numbers could also rise in the northern hemisphere in the future due to migration and climate change. The parasites are transmitted by stomoxyine flies such as the tsetse fly, horseflies or predatory bugs. The pathogen spreads in its host via the bloodstream.

Disturb the metabolism of parasites

An interdisciplinary team of researchers from Helmholtz Zentrum München, Ruhr University Bochum and Warsaw Medical University wants to stop this multiplication in the host. Using the most modern methods of structural biology, the groups of Ralf Erdmann (Ruhr University Bochum) and Michael Sattler (Helmholtz Zentrum München) were able to develop a molecule that blocks the parasite's metabolism at a critical point and thus eliminates it.

This new concept is based on a milestone in basic research. The scientists can look back on many years of collaboration. "Back then," recalls structural biologist Michael Sattler, "Ralf Erdmann and I sat together after a conference and talked about our research. That was when we realized that it could play a key role in the fight against parasites." Together, the scientists researched the biology of the parasites and were able to derive the hypothesis for a new active substance.

The focus of her work is on so-called peroxisomes: These are cell organelles that are found in humans and parasites alike and are essential for the survival of unicellular organisms. "We had to find differences between the human and parasitic import machinery", explains Ralf Erdmann, "so that we could develop specific inhibitors that block the parasites' vital import machinery".

The aim was to disrupt the parasites' metabolism. The glycosomes - peroxisome-related organelles of the trypanosomes - could be identified here as the "Achilles' heel" of the parasite. The team has found a way to trigger a so-called "metabolic catastrophe" in the parasites, which leads to their death. To do this, the scientists used high-resolution X-ray structures and nuclear magnetic resonance (NMR) data to develop tailor-made inhibitors that bind to the proteins like matching pieces of a puzzle. "We knew the lock," is how Grzegorz Popowicz describes the procedure. "Our task was to find the right key!"

Importance of basic research
As basic researchers, Ralf Erdmann and Michael Sattler have been studying the functioning of organelles for many years. This understanding led to the development of an innovative approach to fighting the parasites. Although the research was not initially aimed directly at a drug, the findings could now point the way to a future-oriented active substance.

"Drug development can only be interdisciplinary"
Michael Sattler sees great potential in the combination of basic research and the exchange of teams of scientists from different fields. The example of the winning project of the Erwin Schrödinger Prize 2020 shows the effectiveness of such cooperation, as the structural biologist emphasizes: "Ralf Erdmann and I had the idea for a new approach to active substances. Grzegorz Popowicz then established the methodology for drug screening and structure-based drug development. Maciej Dawidowski synthesized the molecules and Vishal Kalel finally tested them in extensive experiments in the trypanosomes". Michael Sattler emphasizes the importance of teamwork for the success of the project: "Each of these scientists is an expert in what he does, but none of them can develop a drug from start to finish. This can only be done on an interdisciplinary basis."

With the Science Award of the Stifterverband - Erwin Schrödinger Prize, the Helmholtz Association and the Stifterverband recognise outstanding scientific achievements and technological innovations at the interface between various disciplines in medicine, the natural sciences and engineering. The work must involve representatives of at least two disciplines.

The award winners of the last years

The three parasite diseases at a glance

African sleeping sickness
African sleeping sickness is a disease of the lymphatic and nervous systems. The pathogens are unicellular parasites, so-called trypanosomes. The infection is transmitted by bites of infected tsetse flies. The disease occurs mainly in Africa and proceeds in two phases: The first phase usually manifests itself through symptoms such as fever or swollen lymph nodes. The second phase begins when the parasite invades the central nervous system and can lead, among other things, to a change in personality, confusion and a different day-night sleep rhythm. In its final stage, patients fall into a twilight state that has given the disease its name. Untreated, the disease usually leads to death.

Chagas' Disease
Chagas disease - also called American sleeping sickness - is also caused by trypanosomes and is transmitted by nocturnal, blood-sucking predatory bugs. It can lead to a disease of the heart, digestive organs and the nervous system. After an infection, acute fever and respiratory distress occur, and later intestinal paralysis and meningitis may also occur. The drugs available so far are very toxic, and there is no vaccination option. Chagas disease occurs in Mexico and in Central and South America.

Leishmaniasis
Leishmaniasis is a skin and organ disease transmitted by butterfly mosquitoes and caused by unicellular protozotes. Leishmaniasis occurs in warm countries worldwide, in Europe for example in Spain, Italy or Turkey. Cases of the disease are rare in Germany: The Robert Koch Institute assumes that about 20 cases of the disease occur each year. There are numerous variants of leishmaniasis. Possible symptoms include skin ulcers, fever, weight loss, swelling of the liver and spleen, and gastrointestinal disorders. The disease can be mild or severe, depending on its severity.