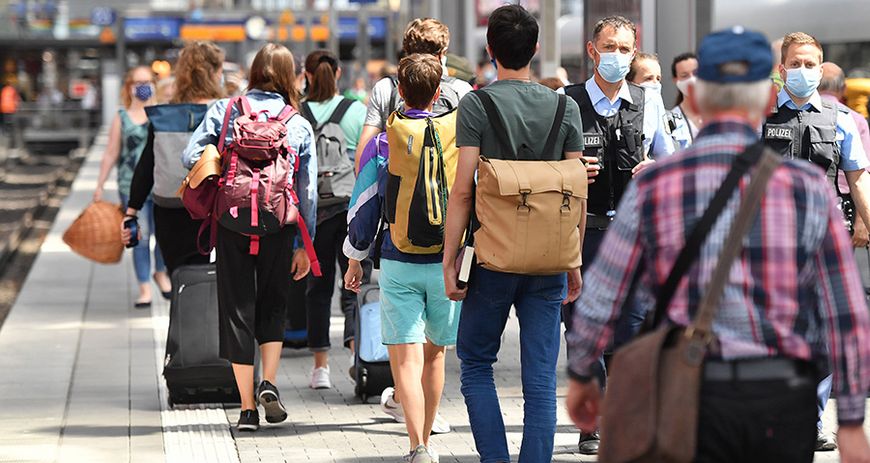 Is this the second wave already?

Infectious diseases often spread in waves. Why is this the case and what do epidemiologists expect in view of the rising number of infections in the coming weeks?

The worst could still be ahead of us. At least that is the fear if the pandemic of the novel coronavirus SARS-CoV-2 follows the course of the Spanish flu in 1917 and 1918. At that time, the second wave was bigger and deadlier than the first wave. In Germany, a second wave seems to be gaining momentum. However, there are many indications that this time it will be completely different from the Spanish flu.

The epidemiological observations of the last decades and centuries have shown that many infectious diseases spread in waves in the population. A classic example is the flu, also known as influenza in technical jargon. Year after year in winter, the number of people affected gradually increases until it reaches its peak in January or February. A new wave comes every winter at a reliable interval. In the 2019/2020 season, 186,919 people fell ill and 518 died, compared with 181,360 people who fell ill and 914 who died the year before.

Although there are numerous such examples of a wave-like course, there is no clear scientific definition as to when a wave of infection occurs. The term and the image behind it come from the graph of daily new infections (see graph below): If the daily new infections increase, a kind of wave occurs, which then flattens out again. But what are the causes? In the case of influenza - which also includes Spanish flu - the reason for the wave-like pattern is due to the time of year: in winter, when the temperature is lower, more people stay together in closed rooms. The danger of infection increases.  In addition, there is the lower solar radiation, which damages many viruses, and the lower temperature.

Some pathogens also tend to mutate: For example, this can undermine immune protection. This effect occurs - in addition to the seasonal factor - also with influenza: The virus mutates, which is why the flu vaccination from the previous season no longer works - a new wave can build up. In this case, the pathogen itself sets the pace of the wave-like spread. "What the wave-like course looks like in these cases depends to a large extent on the respective pathogen and its characteristics," says Gérard Krause, Head of the Department of Epidemiology at the Helmholtz Centre for Infection Research (HZI) in Braunschweig.

The waves of the first wave of the spread of the novel coronavirus SARS-CoV-2 swept over Germany in March and April, when the disease figures peaked at more than 6500 new infections per day. Afterwards, they decreased again, on July 12th there were only 138 new infections per day. Since then, the number of newly infected persons has been slowly increasing again. The experts agree that this is not only due to the fact that more testing is being done.

But the course of the wave in the coronavirus is largely determined by factors other than the virus itself - which makes SARS-CoV-2 a special case. "It wasn't the characteristics of the virus, but the characteristics of humans that stopped the first wave," says Rafael Mikolajczyk, Director of the Institute for Medical Epidemiology, Biometry and Informatics at the Medical Faculty of the Martin Luther University Halle-Wittenberg. If the virus had spread unchecked, many more people in Germany would probably have been infected - and died. "It was largely the containment measures - distance, face masks, hygiene rules - that successfully quelled the first wave," says Mikolajczyk. After the people managed to successfully contain a wave with strict measures, they retract the containment measures. And thus create space for a new wave to build. Until the wave is so high again that the containment is also raised.

The cluelessness and helplessness of the people has disappeared

So people are not helpless victims of a virus, they have the further course in their own hands. If you like, they hold the bat in their hand during the ping-pong game between containment and relaxation. How high a second wave and further waves become, thus seems to a good part in the hand of humans to lie: If everyone is careful, the waves of infection will also run flat. But Gérard Krause of the HZI does not want to put caution above everything: "Those people who have reduced containment somewhat in recent weeks are right in fact, because the risk of infection has also decreased due to the lower case numbers. That's why the game of ping-pong is to some extent a healthy normality. The only thing that is important is to prevent the waves from building up too steeply.

"We are in a good starting position for this, the population is alarmed and is mostly cautious," says Krause. Now it is more a question of developing more targeted containment measures: "We have to look at the number and location of the serious diseases - and use more leverage here," says Krause. This leads to questions like: Which hygiene measures can be implemented and maintained in senior citizens' residences? How can visits be organized here? How can the ventilation of places where many people spend time, such as shopping arcades, be improved? "If we specifically target the risk groups and places, the damage can be kept to a minimum by a second wave," says Krause.

Of course, the second wave can still pick up some momentum in the coming weeks due to the different external conditions, because there is also a seasonal effect with SARS-CoV-2: In the fall and winter, people will once again spend most of their time indoors; the UV radiation from the sun, which is proven to decompose SARS-CoV-2, will decrease, and the temperature will drop. Nevertheless, Krause and Mikolajczyk believe that the second wave may be flatter than the first. Because the cluelessness and ignorance of humans has disappeared. They have become cautious - even when they are not wearing a face mask. This could be decisive in preventing a widespread spread. So the chances are not so bad that the worst is already behind us.