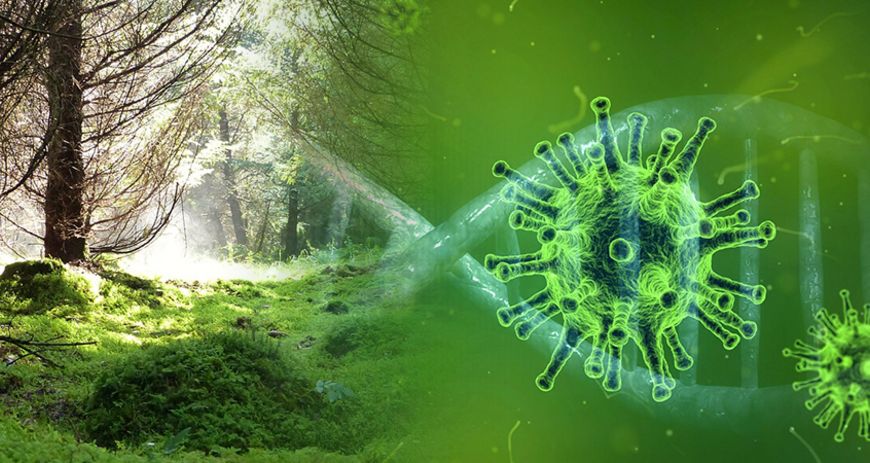 Strengthening ecosystems and making more room for nature again is very important to minimize the chance of viruses being transmitted to humans. Image: pixabay / The Digital Artist; silviarita

How did coronavirus spill over to humans?

The novel coronavirus was likely transmitted to humans by bats or pangolins. What can we learn from this to prevent future pandemics? Josef Settele from the Helmholtz Centre for Environmental Research explains why protecting nature also protects us against outbreaks of infectious diseases.

Around 70 percent of pathogens that cause infectious diseases among humans – including Ebola, influenza, and Severe Acute Respiratory Syndrome (SARS) – spilled over to humans from animals. Understanding where a pathogen comes from can help prevent future pandemics. This puts the expertise of biologists in high demand as the world searches for the origin of the novel coronavirus, SARS-CoV-2.

One of these experts is Josef Settele, an agricultural ecologist at the Helmholtz Centre for Environmental Research (UFZ) and Co-Chair of the Global Assessment Report published by the Intergovernmental Science-Policy Platform on Biodiversity and Ecosystem Services (IPBES). Settele had already highlighted the link between biodiversity and the emergence of pandemics and epidemics back in 2011. He pointed out that when animals lose access to their natural environments – for instance, because people are impacting how land is used – they are forced to share their habitats with humans. Closer contact with these host animals carrying the virus increases the potential risk of a virus jumping to humans. In a study at the time, Settele and his colleague Volker Hammen wrote: “Insects, bats, birds, fruit bats, and pigs often play a role in newly emerging diseases. The interaction between pathogenic bacteria, viruses, parasites, and their hosts both within the ecosystem and between the ecosystem and people could trigger an outbreak of serious diseases or a pandemic.”

In the case of the current SARS-CoV-2 outbreak, most scientists believe the disease initially came from either bats or Chinese pangolins before being passed from human to human. There are two hypotheses on how the virus jumped to humans. “One possibility is that the virus developed via natural selection in an animal host – in other words, before it was transmitted from an animal to a human,” says Settele. It’s highly likely that bats acted as the natural reservoir for SARS-CoV-2, as it most closely resembles the coronaviruses commonly found in bats. Researchers have identified around 3,200 different types of coronavirus in bats and their close relatives, fruit bats. The animals are infected by the virus, but it doesn’t make them sick. But Settele notes that because there haven’t been any documented cases of direct transmission from bats to humans yet, we still have to assume that an intermediate host was involved.

Another hypothesis is that natural selection in humans only happened after the virus had made the leap to humans. In this case, the pangolin would have played a key role in transmission. “This means a coronavirus found in pangolins could have been transmitted to humans, either directly or via intermediate hosts such as civet cats or ferrets,” Settele explains. However, he says it is still too early to know which of these scenarios actually played out.

But how can we minimize the chance of viruses being transmitted to humans in the future? Conservationists have long called for large wet markets in Asia to be shut down – like the one in Wuhan, which is where Chinese authorities say the coronavirus pandemic began. Settele also stresses the importance of strengthening ecosystems and making more room for nature again. “Significant changes in the way land is used result in the loss of habitats, which leads to higher population densities for certain species and therefore to more contact with humans,” he says. Settele also points out that species which do survive tend to change their behavior and end up sharing habitats with people more and more. As a result, there are fewer barriers between humans and host animals – which increases the potential risk of animals transmitting diseases to humans.

Another important aspect is that people’s immune systems are obviously unprepared when they access previously untouched areas of nature. “When people make their way into new areas, it’s not unlikely they will come into contact with species they haven’t encountered before – so they don’t have any previous immune defenses against them,” says Joachim Spangenberg, who has worked at UFZ for many years and is a member of the Scientific Committee at the European Environment Agency (EEA). In other words, there is a direct link between our destruction of the natural world and the emergence of pandemics: The more ecosystems are degraded, the greater the likelihood that a pandemic will occur.

This shows that the loss of biodiversity, close contact between people and animals, and human intervention in the natural world increase the risk of outbreaks – but which of these factors is most concerning? “Right now, we can’t say which of these processes plays the biggest role, but I think that doesn’t really matter. It’s situations where they occur together that lead to people basically creating the conditions for diseases to spread,” Settele concludes. And this, he says, is why the SARS-CoV-2 outbreak didn’t come as a great surprise to many experts.

Human influence and the role of climate change

The World Wide Fund for Nature (WWF) has outlined the impacts that human intervention in natural ecosystems can have on the spread of viruses in the new report “The Loss of Nature and Rise of Pandemics”. The conservation organization makes reference, for example, to a study conducted by Brazilian scientists, which found that the deforestation of an area of woodland in Brazil was accompanied by a 50-percent increase in cases of malaria. A team of researchers in Africa reported that dam construction projects led to a dramatic reduction in populations of migratory freshwater shrimp. This caused the shrimps’ prey – certain species of snail – to proliferate. Because these snails are intermediate hosts for schistosomiasis (bilharzia), the number of people affected by the disease increased.

Another factor is climate change. Global warming is allowing invasive species like the Asian tiger mosquito to become established in Europe. According to the Friedrich Loeffler Institute, Germany’s National Institute for Animal Health, this mosquito is capable of transmitting over 20 pathogens, including yellow fever and Zika virus. “Climate change is making it possible for species that we haven’t previously seen here to become established in Germany,” Settele confirms.

So, what can we do? “Keeping ecosystems intact and preserving the biodiversity typically found there can reduce the risk of infectious diseases emerging in general,” Settele summarizes. Svenja Schulze, Germany’s Minister of the Environment, backs up this statement. “Science shows us that the more people destroy nature, the greater the risk that a virus will jump to humans from another species – and the greater the risk that we’ll see outbreaks of diseases, and potentially pandemics,” she stresses in a communication from her ministry. Schulze says this underscores the importance of conservation when it comes to protecting human health. In other words, protecting natural diversity on an ongoing basis protects us against outbreaks of diseases, too.