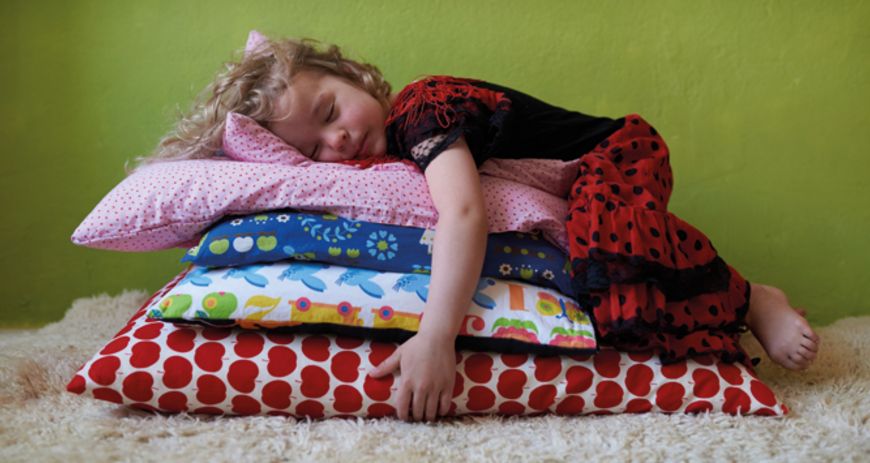 Recuperative sleep not only contributes to the well-being of human beings – it is first and foremost important for health. The message here: quality over quantity.

Once the good-night story has been read and the stuffed animal tucked firmly under the arm, it usually doesn’t take very long before the eyes close and the child’s breathing becomes regular. The stress and excitement of the day seem to fade away. But the external tranquillity is deceptive. After falling asleep, children as well as adults first of all enter directly into a deep sleep – and during this phase the body is highly active. Scientists today know that the most important purification processes take place during this phase; the immune system is activated, growth hormones are secreted, proteins are built up, and free radicals that arise during metabolic processes and could damage genetic material, are destroyed.

Sleep is an important component of our well-being and health. Recent studies have shown that the quantity of sleep is not as important as the quality of sleep. But it is precisely this aspect that seems to be missing for many people. According to statistics from the Robert Koch Institute, eleven percent of the German population perceive their sleep to be “frequently non-restful”. About 25 percent complain about sleeping disorders.

On average, adults sleep daily seven hours and 15 minutes. “The individual need for sleep can however deviate appreciably from the average,” says Alfred Wiater, President of the German Sleep Society (GDSM).   “There are short-sleepers and long-sleepers. What is crucial is how we feel during the day, whether we experience sleep-related bodily disorders or physical stresses.”

The first deep-sleep phase after falling asleep lasts about one hour, then the first dream-phase ensues. Since the eyes move quickly back and forth under the eyelids during this phase, it is also called the REM phase, short for Rapid Eye Movement. Scientists assume that during the REM phase the events of the previous day are processed. Furthermore, the brain is exercised.

“During the night we pass through multiple sleep cycles with various stages of sleep,” says Wiater. “For example, interactions between these sleep stages enable memory consolidation, that is, reinforcement of memory.” If these interactions are disturbed, it can lead to fatal consequences. Various studies put bad sleep in connection with an increased risk of acquiring diabetes, cardiovascular diseases or depression. One of the main reasons for this, according to experts, is that most regulative hormones in the body have a 24-hour cycle. The body’s own anti-stress hormone cortisol, for example, follows such a circadian rhythm; immediately prior to getting up, it is secreted in higher amounts to enable the body to deal with the stress of waking up. In the course of the day, concentration declines continuously and stays at a constant low level at night, since there is no stress to be expected. “But whenever our sleep cycle is interrupted, the rhythm for secretion of cortisol is also interrupted,” says Karl-Heinz Ladwig, Professor at the Institute of Epidemiology at the Helmholtz Zentrum München. “Something similar can also be observed for many other hormones or for example for blood pressure. If the sleeping disorder persists longer, the circadian rhythms get mixed up and this inevitably leads to errors of judgement.”

In addition to physical diseases, the connection between sleeping disorders and mood swings is also a well-known phenomenon. Wiater and his colleagues were able to prove in the Cologne sleep study for children an increased risk of hyperactivity and emotional disorders such as anxiety states and depression in children and juveniles. Moreover it was shown that sleeping disorders lead to problems with concentration and endurance as well as hampered school performance. “The optimal sleeping environment is dark, quiet and temperature-controlled to maximum 18° Celsius.” A recently published study in the journal Sleep has shown that it is predominantly interrupted sleep that leads to mood swings. People who wake up frequently at night because they have to look after their child, the partner snores, or they are bothered by noise, are accordingly more unbalanced and less efficient. “In the context of interrupted sleep, the sleep architecture is disrupted. This is detrimental,” says Ladwig. “The study basically underscores the notion that the quality of sleep is more important than the quantity.”

Increasing globalisation and permanent availability of communication severely disrupts the day-night cycle, which in turn leads to sleeping disorders. “The optimal sleeping environment is dark, quiet and temperature-controlled to maximum 18° Celsius,” says Alfred Wiater. Hence darkness induces secretion of the sleep-onset hormone melatonin. If it is absent, or if it is available only in short supply, due to artificial light for example, it disturbs the natural wake-sleep rhythm – sleep is not as good. Not only artificial light sources counteract the natural light-dark influences; most people’s daily routine also requires them to get up at a certain time. Of course, we can add that alarm clocks, mobile telephones and increasing traffic disturb our sleep.

We can only appear to grow accustomed to new circumstances and disruptive factors. “If we sleep for a while with extreme noise or in bright rooms, we do indeed have the impression that we can deal with it, but data show that the physical consequences continue to exist,” says Ladwig. The same is true of the increasing insecurity that we perceive these days when planning our lives, due to our modern society.”  This is because our mood as well impacts the quality of our sleep.

Alfred Wiater summarises the most important parameters for healthy and recuperative sleep as sleep hygiene and sleeping environment: “Sleep hygiene consists of going to bed physically and emotionally relaxed, neither hungry nor glutted, without stimulants such as tea, coffee or nicotine, and without the sleep-disruptive effects of alcohol.” A proven method to tackle the effects of an unsatisfying night of sleep, by the way, is an afternoon nap. “This should be figured in with the overall sleep time,” says Alfred Wiater. “It is usually not as restful as night-time sleep, but can definitely serve to regenerate and improve performance.”

Sleeping disorder due to flight noise – the hidden stress

How long and how well people sleep depends on many external factors: An uncomfortable bed, temperature fluctuations, or certain lighting conditions can disrupt sleep considerably. “Of course, these are factors that can we can regulate and remedy ourselves,” says Uwe Müller from the German Aerospace Center (DLR). The graduate physicist and his colleagues are examining a disruptive factor that can’t be simply turned off – flight noise.     Müller leads a subproject within the NORAH study – short for Noise-Related Annoyance, Cognition, and Health-Study. Between 2011 and 2013 the scientists examined the sleep behaviour of more than 200 individuals in the region around the Frankfurt airport. The unique thing here was that the initial measurements took place even before the introduction of the core rest period from 11 pm to 5 am and the commissioning of an additional runway. “We recorded both the body signals during sleep as well as the noise that could be heard during the night,” says Müller. “We were thus able to see how deep the participants were sleeping and how they reacted to the fly-over of planes and the subsequent increase in noise level.”

On average, every individual wakes up between 20 and 25 times every night. Studies have shown that one can however only remember it the next morning if one was awake longer than 90 seconds. “Noise assures that both the conscious and unconscious wake-up reactions increase and that our normal sleep cycle is changed,” says Uwe Müller. Sleep is then less recuperative. And also the risk of depressions and cardio-vascular diseases increases over the long term.

But it is certain that flight noise is not good for the body. The NORAH data substantiate that bodily reactions even appear when people think that they have grown accustomed to noise. Flight bans at night could provide some relief, but they still haven’t been prescribed everywhere. The study has however also shown that flight noise alone does not determine whether the local residents feel tired or not. In the study, the subjective sense of drowsiness was measured with a questionnaire on a scale of 1 (very awake) to 9 (very tired). “Even though the wake-up reactions of our test subjects have decreased since the introduction of the core rest period in Frankfurt, they indicated that they still felt just as drowsy the next morning,” says Müller. What exactly this result signifies will have to be examined further by the research scientists.

During the discussion concerning noise protection near airports, various interests played a big role according to Müller. He is therefore demanding more honest discourse: “A societal consensus simply has to be reached in this matter concerning how important the economic added value of non-stop air traffic is, and then the risks that it represents for the population have to be confronted.” The discussion has so far only been conducted at a very emotional level, he criticises. “The data that we and other studies have gathered are being interpreted very selectively by both sides.”

More information regarding the NORAH sleep study: www.norah-studie.de/s2d (in German)