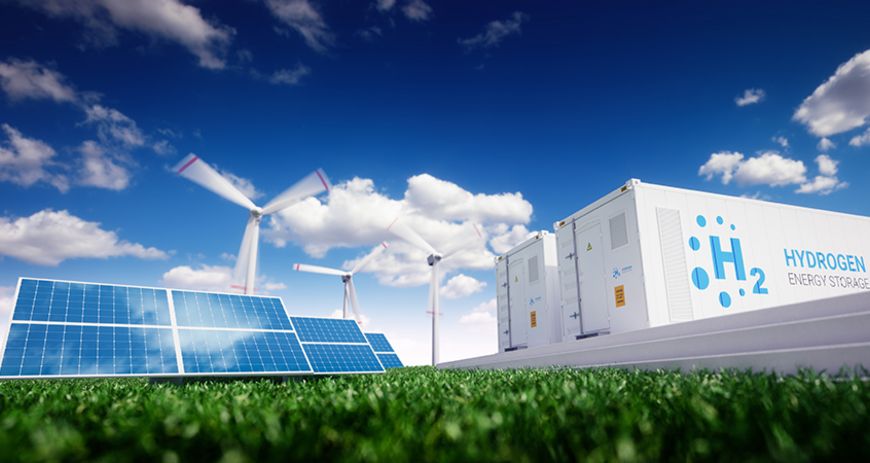 Hydrogen for the energy transition

The oil of the future

Hydrogen technologies are essential for the success of Germany’s energy transition. Helmholtz researchers have long been working on ways to harness this versatile energy source so it can be used on a comprehensive basis. With the introduction of the National Hydrogen Strategy, this topic is now becoming politically relevant as well.

Germany has set itself the goal of becoming climate neutral by 2050. This plan can only succeed if it uses a broad mix of technologies to produce, use, and store energy. It is already clear that hydrogen will take center stage in these efforts. This energy source does not release pollutants when combusted, is extremely versatile, and can also be readily stored and transported. The problem is that, so far, hydrogen has primarily been produced using fossil fuels such as natural gas. “For our energy transition to succeed, we need carbon-free hydrogen and the full spectrum of possibilities it offers over the medium to long term,” the Federal Government announced at the end of 2019 with a view to introducing a National Hydrogen Strategy. The aim of this strategy is to “make Germany the world’s leading supplier using cutting-edge hydrogen technology” and to ensure the security of its supply with carbon-free hydrogen. In June 2020, the German government  finally adopted this strategy.

Hydrogen’s role in the energy transition

Hydrogen technologies have the potential to advance the energy transition in four areas. First, these technologies can bridge the gap between the production of electricity using renewable energy (which tends to fluctuate) and the growing demand for green electricity. Hydrogen is chemically produced from water using energy from solar or wind power plants. Liquid hydrogen can be readily stored and transported and can also be converted back into energy if needed. Second, these processes allow the energy sectors – electricity, heat, industry, and transport – to be coupled. If there is a surplus of renewable electricity, the industrial sector can produce more hydrogen to power fuel cell vehicles, for example. Third, hydrogen can replace carbon-based energy sources in industrial production processes such as the manufacture of steel or basic chemical materials. And fourth, hydrogen could even be used to convert CO2 emissions into synthetic fuels and chemicals in cases where they are unavoidable. Synthetic fuels can be readily stored and used in the shipping and aviation industries, for instance, where electric drives are not an option. However, producing them is still a very expensive and complex process that requires large amounts of renewable energy. The Karlsruhe Institute of Technology (KIT) and Forschungszentrum Jülich are addressing this by developing chemical reactor technologies that can be used to convert hydrogen and CO₂ into synthetic energy sources and chemical substances using decentralized systems.

Germany’s Federal Government now intends to back up these diverse fields of application and potential uses by introducing the National Hydrogen Strategy – with the goal of making Germany a global front runner in hydrogen technologies. Various ministries are developing a systematic approach that combines the production, transport, distribution, and use of hydrogen while also taking international dimensions into account. “If we set the right course now, Germany can become a leading provider of technologies for utilizing this raw material,” says Detlef Stolten, Director of the Institute of Techno-Economic Systems Analysis (IEK-3) at Forschungszentrum Jülich. “By developing various applications that can soon be used on a large scale, hydrogen can both replace fossil fuels and make it possible to tap into the enormous potential that renewable energy sources such as wind and solar offer on a new level.”

The production, import, and use of CO2-free hydrogen are set to play a major role in Germany’s economy in the future. By introducing the National Hydrogen Strategy, the Federal Government is striving to lay the groundwork for this change and to coordinate its activities in this area. The strategy aims to help set up a program to develop hydrogen production facilities. Plans include building industrial production facilities with a capacity of up to 5 gigawatts in Germany by 2030, with a further 5 gigawatts of capacity to follow by 2035. In its stimulus package adopted on June 3, 2020, the Federal Government announced a financing requirement of 7 billion euros for the country’s Hydrogen Strategy.

Stimulus package of the German Federal Government (in German)

A key component for the transformation of the energy system

But there is still a lot to do in terms of making hydrogen technologies marketable. “The infrastructure of Germany’s energy system will need to be completely overhauled if we want to meet the Federal Government’s climate targets by 2050,” Stolten says. At the end of 2019, IEK-3 set up a study that outlines promising ways to potentially achieve these targets. In the meantime, the Federal Government has adopted the Climate Protection Law (link in German), which sets out the country’s target for greenhouse gas neutrality. Its climate protection targets previously aimed to reduce Germany’s greenhouse gas emissions by 80 to 95 percent by 2050 compared to 1990 levels. “The fact that Germany now wants to become climate neutral in 30 years makes a significant difference,” stresses Stolten. He says that some of the measures considered prior to this might even be counterproductive. “Businesses and policymakers should take immediate steps to align their mid-term mitigation strategies and related investment measures with this target to ensure that financial resources are used efficiently.”

According to the study, wind power and photovoltaics will serve as the backbone of Germany’s future power supply. This will mean increasing the country’s installed wind power capacity by a factor of four and its photovoltaic output by a factor of 3.7 by 2050 compared to current levels. The use of hydrogen is set to play an equally important role, with the study indicating that demand will increase to 12 million metric tons by 2050. Over 50 percent of this is to be covered by domestic production and the rest by imports.

Hydrogen: a theory of color

It is true that hydrogen is already being used as an energy source in industry, particularly in sectors with high levels of consumption such as the chemical industry. But the resource is almost always generated from fossil fuels at present, primarily using a process called natural gas steam reforming. This results in the production of carbon dioxide, which is usually released into the atmosphere. A distinction is made between this “gray” hydrogen and “blue” hydrogen, which is also produced using fossil sources. In the latter case, however, the CO2 is captured and stored underground (carbon capture and storage, or CCS). “Turquoise” hydrogen, on the other hand, is generated by using heat to split methane, a method known as methane pyrolysis. Instead of CO2, this process yields solid carbon. “Green hydrogen, which is generated by using renewable electricity to electrolyze water or water vapor, is the only option that makes sense in the long term, because none of the other approaches are sustainable,” stresses Roland Dittmeyer, Director of the Institute for Micro Process Engineering at the Karlsruhe Institute of Technology (KIT). “Blue hydrogen should only be used as a transitional technology for as brief a time as possible.”

“Blue hydrogen should only be used as a transitional technology for as brief a time as possible.”

Researchers at Helmholtz are developing new technologies for the various efforts relating to the energy transition in a number of different demo and pilot projects. Their research in this area covers the entire range, from basic principles to applications as well as the entire value chain. One example is a partnership between Forschungszentrum Jülich, the German Aerospace Center (DLR), KIT, and other partners that is focusing on freight transport and long-distance mobility in the Copernicus Project Power-to-X (link in German): “CO2 can be used to convert hydrogen into fuels that – in contrast to hydrogen for fuel cell vehicles – do not require any special new infrastructure,” Dittmeyer explains. “If the CO2 used in the process comes from the atmosphere or from unavoidable sources that are not involved in generating electricity or heat, a cycle of use can be developed that doesn’t cause any additional CO2 emissions.” An integrated pilot plant at container scale is already producing fuels from CO2, the air, and green electricity.

But Germany cannot produce all the hydrogen it needs for its energy transition domestically. “Right now, we’re importing nearly all the fossil fuels that we use to produce the hydrogen we currently need,” says Christian Sattler, Head of Solar Chemical Engineering at the DLR Institute of Solar Research. “In the future, we’ll import a large share of our synthetic fuels and hydrogen, but we’ll need to make sure they are produced using sustainable methods.” The Federal Government is seeking “reliable international partners – with a focus on the EU” to this end and hopes to develop related partnerships and import structures. 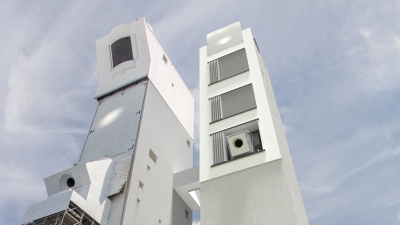 Researchers at the institute in Jülich are currently building a second solar tower so they can develop and test the technologies. This will significantly increase their testing capacities for solar thermal technologies. The first tower has already been in operation since 2011 – however, its capacity is barely able to cover the high demand placed on it. Some 2,000 mirrors in front of the two towers concentrate the sunlight hitting them like a magnifying glass and reflect it onto a thermal receiver in one of the towers, for example to a reactor for producing hydrogen. Hydrogen contained in water vapor can be separated there at temperatures of up to 1,000 degrees Celsius or more. In the future, systems like this could be located in large deserts near the tropics in order to produce hydrogen that could be transported to Germany by ship. If all potential options for producing electricity from renewable sources are used in Germany and Europe, the share of imported energy sources making up the overall balance could be decreased in the future. Trading energy sources – which would then be produced sustainably – would nonetheless remain an important part of the global economy. And hydrogen would become the oil of the future.

Sattler thinks Germany is moving in the right direction with its Hydrogen Strategy “because industry and politics are working together.” He says that considerable progress has been made in recent years and that there is now a greater awareness and understanding of the major task that lies ahead. And he thinks Germany can learn from the example of others as it takes its next steps: “California is a good model for mobility, Korea for producing electricity using fuel cells, and Japan for expanding the refueling infrastructure.”

The three Helmholtz researchers all agree that Germany has finally made a start by adopting its Hydrogen Strategy – and now it’s time to take rapid action.

The energy transition is one of the major challenges facing society. Helmholtz is developing solutions to address this challenge – and is employing a long-term, integrated approach to support these efforts. Around 600 employees at ten Helmholtz Centers are researching hydrogen technologies. The range of their work extends from basic principles to applications and covers the entire value chain. But the scientists are not just carrying out technological research, they are also conducting studies on system analytics and socio-economic factors with the goal of optimizing the energy system with respect to its technological focus, including all social, economic, and political aspects.

The Competence Map Hydrogen provides a clear overview of the hydrogen-related research activities carried out by the Helmholtz Centers.