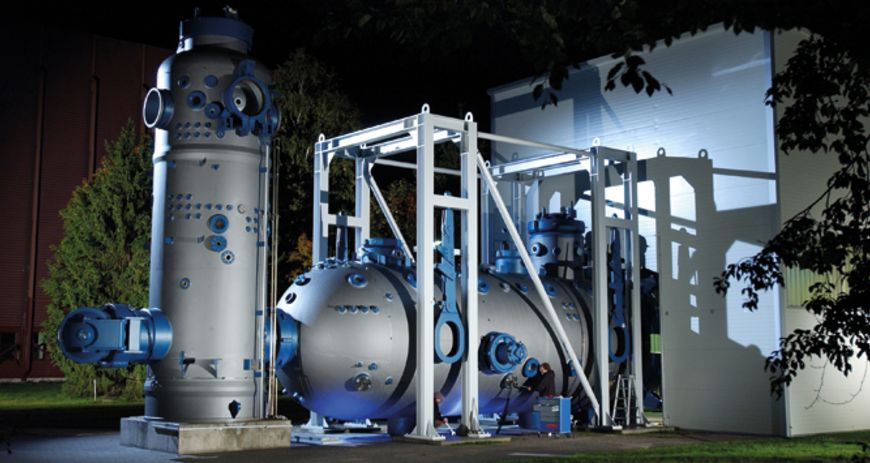 The explosion is up to 263 decibels loud that Thomas Jordan creates at his work-station. Compared to this, a jet taking off with its 110 decibels sounds almost like a whisper.

“Volume like this is by no means acceptable for a work-station,” says Jordan, who directs the Hydrogen Working Group at the Karlsruhe Institute of Technology (KIT). But this noise is dampened by protective vessels that reduce it down to a tolerable volume.

Jordan and his colleagues are examining the dynamic behaviour of flames in combustible gas mixtures – particularly hydrogen-air mixtures. When hydrogen is mixed with the oxygen in the air, it can lead to massive explosions when ignited. As little as one kilogram of hydrogen can produce the effect of up to 30 kilograms of TNT. Their experiments are carried out by the Karlsruhe research scientists for this reason in several large metal-encased protective vessels. “Hydrogen explosions play an important role in nuclear accidents, since they endanger safe containment of the radioactive materials, says Jordan. In nuclear power plants, there is of course no pure hydrogen, but it can arise from the extremely high, accident-related temperatures on the casings of the fuel rods and, due to an explosion, lead to substantial damage to the reactor containment or to the reactor buildings.

Hydrogen is also being investigated as an energy accumulator, which can be efficiently and cleanly implemented either as fuel in conventional motors and turbines, or in fuel-cells for direct power generation. The ear-splitting noise in Jordan’s research facilities is thus contributing to making hydrogen even more secure in the future.