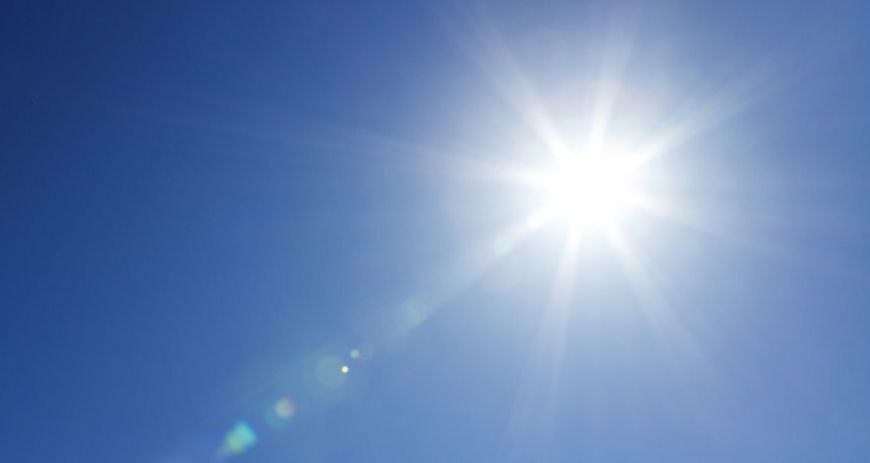 On hot summer days we are all too aware of the intensity of sunlight. Photo: Fotolia.com/rangizz

The sun provides us with free energy. Yet one problem remains unsolved: what happens with all the energy we capture. After all, private households and the industry need the largest amount of electricity at just such a time when the sun does not shine very much and the wind does not blow with force.

Anybody venturing outside in the peak of summer gets to feel the unbridled strength of the sun. The sun tans our skin, causes sunburn, warms up water bodies and makes us perspire. And it is capable of much more. With its rays we can generate electricity, feed it into our grid and we can generate energy from hydrogen.

Yet one problem remains unsolved: what happens with all the energy we capture on sunny days like these, with the seemingly unlimited amount of solar energy shining down on us? After all, private households and the industry need the largest amounts of electricity at just such a time when the sun does not shine very much or the wind does not blow with force. This is a question that has been giving researchers a headache for a long time and which is more urgent than ever in the times of energy transition: how can we store energy generated by sun and wind for times when we need it urgently?

The German Federal Environment Minister, Peter Altmaier (CDU), has issued the rallying cry: He says: "The energy transition must be a success." Yet at the same time it is clear that this is dependent on electrical storage options improving at long last. Science and industry therefore work at full speed to develop new technologies.

In wide use already are pumped-storage hydroelectric power stations, which can keep energy available by way of large water basins. However, the capacities in Germany for such pumped-storage facilities are almost exhausted.

Therefore, in Staßfurt in Saxony-Anhalt, the German Aerospace Center (DLR), a member of the Helmholtz Association, and industry partners are testing ADELE. The lengthy German acronym translates as "Adiabatic compressed-air energy storage (CAES) for electricity supply" and the system works thus: at times of high electricity availability, a compressor pumps warm compressed air into subterranean caverns. When electricity demand rises and the grid needs stabilising, this compressed air can be used to generate power in a turbine - without the need for additional fuels.

ADELE is only one of many strategies to finally solve the electricity storage problem. The team around Roel van de Krol at the Helmholtz-Zentrum Berlin works on another, combining in their research two technologies within one component: on the one hand, electrolysis of water, using electricity to decompose water into oxygen and hydrogen. The hydrogen provides energy for gas turbines or fuel cells. On the other, the possibility of generating electricity directly from the sun's rays by way of semi-conductors such as silicon. This principle is used in solar panels that are installed on roof tops. Yet because silicon cannot be submerged in water for too long before it corrodes, the researchers coated the solar cell with glass and metal oxide.

"It is the best from both worlds", says van de Krol. "We utilise the chemical stability and low price of metal oxides, combine this with a comparatively simple and cheap silicon solar cell and get a very stable and efficient cell at a reasonable price." Yet before it is ready for commercial use, says van de Krol, it needs a lot of optimisation, the technology needs to become more efficient and larger. "Our cell has a surface of only one square centimetre. That is way too little to produce electricity on a large scale. But I think we will solve this problem within the next few years." This would mean availability of an efficient technology for storing the sun's energy.

At the same time, the energy transition constitutes a challenge for our power grid. In future, electricity will be generated by many small producers instead of by few, centrally connected, large power plants. Yet the sun does not always shine with the same intensity and sometimes it does not shine much at all. This results in sometimes more, sometimes less electricity being available. Will this cause our grid to falter, will the energy transition result in blackouts?

In their basic research on power grids, Marc Timme and Dirk Witthaut from the Max Planck Institute for Dynamics and Self-Organization in Göttingen have found out that this need not be the case, if the capacity of the power lines is sufficiently high. "In our model, the many small generators synchronise with each other and with the motors that are connected to the grid", says Witthaut. One might say they agree on an average oscillation. Amongst other things, this joint oscillation prevents blackouts and short circuits.

So will it suffice to simply install as many cables as possible with as high a capacity as possible in order to stabilise the future power grid? Following the principle: the more cables, the better?

Not necessarily, as Timme and Witthaut found out in further simulations. "A paradox known from traffic planning could occur also in power grids: when an additional large road is built to improve the flow of traffic, this may lead to more congestion than to less. The same can happen also in the power grid. One should not simply say: we shall install more cables and all will be well. We must improve also the capacity of the supply cables", says Witthaut. He adds that complex systems such as power grids often display effects that do not correspond to our intuition. One therefore needs to plan the imminent expansion of the grid with particular care.

On a sunny summer day, the grid is under high tension. The electricity from all the solar panels throughout the country feeds into the grid. The result is of enormous value. Soon we will be able to preserve it even better.