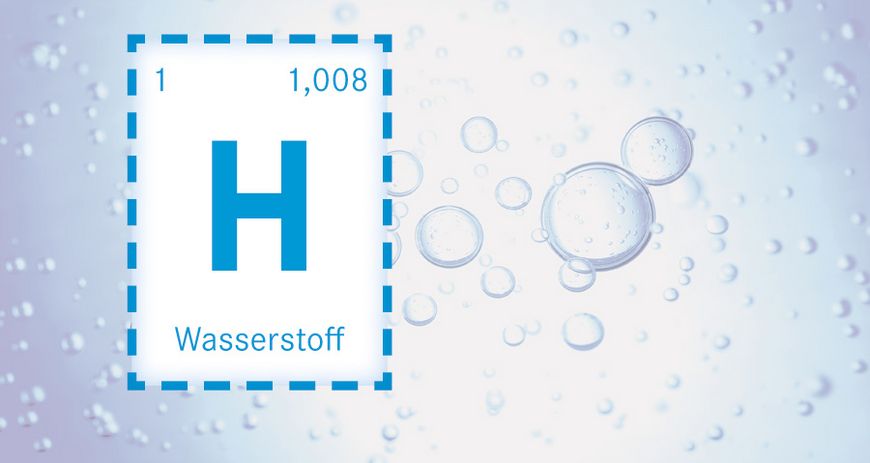 Hydrogen is a well-known energy carrier. But it is only now that researchers can make proper use of its enormous potential for the success of the energy turnaround - and are working on making the old idea of the fuel cell fit for the future.

The good news first: the energy from solar and wind power plants that could be used in Germany significantly exceeds our high energy requirements. Now the bad news: this surplus is not always available when it is needed. In addition, many sparsely populated regions are well suited for high-yield wind or solar power plants, but their electricity is needed in urban areas. What is needed, therefore, is the ability to store energy produced in an environmentally friendly way - and to transport it when needed. Speaking of transport: Alternatives to diesel and petrol are being desperately sought on the roads. And so it is that an energy source that has long been known is receiving new attention: hydrogen. A number of research projects are working on making it usable on a large scale.

In the medium term, ships, trains, trucks and buses could use this emission-free fuel with the help of fuel cells.

"In the future, hydrogen technologies will offer themselves above all as an alternative to the diesel engine," says Peter Wasserscheid, Director at the Helmholtz Institute Erlangen-Nuremberg for Renewable Energies (HI ERN). "On longer distances or in continuous operation, where problems arise with electric cars charged at the plug, hydrogen-powered electric mobility can do a lot". Together with two colleagues he has developed a solution for this: Hydrogen is chemically bound to a carrier liquid called dibenzyltoluene - which means that it can be transported in the same tanker vehicles as conventional fuel. "Dibenzyltoluene is known in industry for its high stability and non-toxic properties and is excellently suited as a liquid hydrogen carrier," explains Wasserscheid. The substance is obtained from toluene, which is currently burned in large quantities as a petrol component. The team has also developed the necessary catalysts, apparatus and processes in order to be able to store hydrogen.

The team demonstrated the feasibility of this technology in test facilities and brought it to market maturity. "The principle is similar to filling and emptying a returnable bottle, which is then available again for the next storage cycle," says Wasserscheid: The liquid hydrogen carrier is not consumed, but can be reused several hundred times. Its practical suitability is also a big plus: any normal filling station would be able to dispense dibenzyltoluene instead of petrol or diesel. The entire petrochemical infrastructure would be available if required. "In the medium term, ships, trains, trucks and buses could use this emission-free fuel with the help of fuel cells," says Wasserscheid. "Liquid hydrogen carriers can also make an important contribution to global trade in renewable energies." These prospects have already earned the scientists a nomination for the German Future Prize 2018.

Hydrogen can be produced by electrolysis: water is broken down into hydrogen and oxygen - the energy required for this reaction is stored in the hydrogen. It can be easily recovered when needed. This is the function of fuel cells: In them, hydrogen and oxygen react, releasing electricity and water. This reaction is also known as "cold combustion" and, in addition to its efficiency, has one major advantage: no pollutants are released.

Current research is concerned with optimizing fuel cells for everyday operation. Until now, the technology has been held back for many decades due to high technical requirements and high costs. One promising variant is metal-supported fuel cells, on which scientists from the "Christian Doppler Laboratory for Interfaces in Metal-supported Electrochemical Energy Converters" are working. The laboratory combines the know-how of Forschungszentrum Jülich and TU Vienna as well as that of companies from the fields of drive system and materials development. "We have been testing metal-supported solid electrolyte fuel cells since 2014", says project manager Martin Bram from Jülich. "Compared with already established ceramic cells, our test objects are highly efficient, stable and can be produced at low cost.

"If these capacities were fully exploited to feed in hydrogen, a considerable input of renewable energies could be stored in the overall storage system."

These three strengths are important prerequisites for large-scale deployment. That's why the eight-member team is developing prototypes whose performance and service life are getting higher and higher step by step. One of the obstacles is the ageing phenomena of the cells during long-term operation: At operating temperatures of 600 to 800 degrees Celsius, the structure of the electrodes changes, which directly affects the electrochemical processes. "We want to minimize these effects," explains Bram. He is certain: "We can make an important contribution to the industrial implementation of this technology here.

For the energy system of the future, not only must hydrogen be converted into electricity as efficiently as possible - but also, conversely, the electricity from renewable energy sources that is currently not needed must be converted into hydrogen. "In order to be able to compensate for the fluctuating power generation of renewables, flexible electrolysis plants for the production of hydrogen are becoming increasingly important," says Christopher Hebling, head of the Hydrogen Technologies Division at the Fraunhofer Institute for Solar Energy Systems ISE. The existing natural gas network can be used as a long-term storage facility. Fraunhofer ISE has commissioned a plant on its Freiburg premises that can feed hydrogen into the gas network. Since August 2017, customers of the municipal distribution network have been receiving up to two percent hydrogen in natural gas. Up to ten percent would be technically possible. Behind this, there is enormous potential in Germany: Around 50 natural gas storage facilities (underground) have a capacity of around 23 billion cubic meters of gas. "If these capacities were fully exploited to feed in hydrogen, a considerable input of renewable energies could be stored in the overall system," says Hebling.

Andreas Friedrich also wants to improve the ecological balance. And that means road traffic. Due to the trend towards online shopping, for example, the number of parcel carriers is growing significantly, the streets in the cities are dense, the air thick. "It gets particularly congested on the 'last mile' from the logistics centre to the customer," says Friedrich, who is Head of the Department of Electrochemical Energy Technology at the Institute of Technical Thermodynamics at the German Aerospace Center (DLR). Together with a team of DLR researchers, he is further developing the cargo bicycle into the delivery van of the future - with the help of a fuel cell module they have named Fuel Cell Range Extender (FCREX). "It will be designed for conditions that correspond to the performance, radius and duration of load wheel operations in city centres," says Friedrich. "The FCREX weighs around seven kilos, the small box can be attached to the bicycle frame." Among other things, precious metal catalytic converters provide the necessary power. In a next step, the researchers want to significantly reduce the proportion of this expensive material. So far, around 20 grams of precious metals have been used in a fuel cell that can power a car. The exhaust system of a diesel engine contains eight to twelve grams, while a petrol engine contains four to six. "We want to achieve these levels gradually," says Friedrich. In 2019, the developments will enter the final phase, and in 2020 trial operation is to start at selected locations. Within a year, the load wheels should initially be able to cover up to 1,000 kilometers - and save correspondingly high CO2 emissions compared to conventional delivery vans.