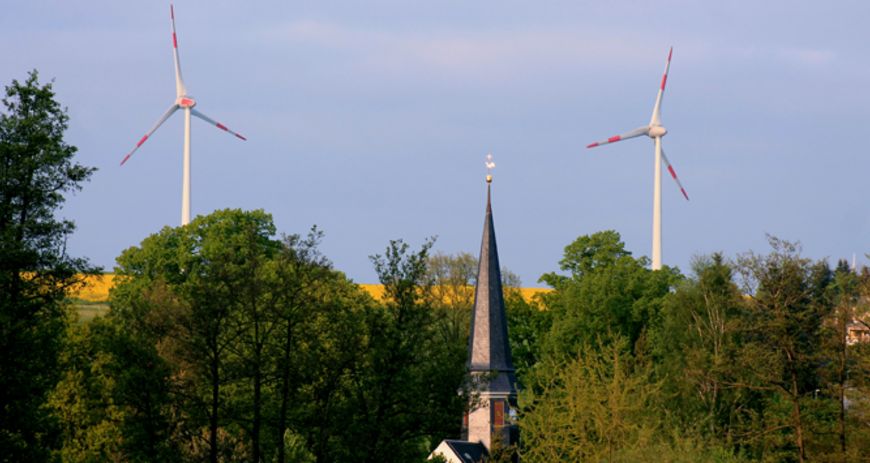 Can a system of decentralised power supply pay off?

Whether it involves wind turbines out in the field or solar cells on your roof – tomorrow’s approach to power generation will be decentralised and fluctuates according to weather conditions. To assure that electricity from the power outlet is always available everywhere, research scientists are working on new forms of energy storage. Peter Wasserscheid, founding Director at the Helmholtz Institute Erlangen-Nürnberg tells us what is important.

Is it possible that the Federal Republic of Germany could be converted across the board to decentralised power supply – what would that look like?

First of all, energy-supply grids would have to be defined: administrative districts, small towns or even sections of large cities. Each of these grids would have to attempt, for the most part, to cover their energy needs on their own. Wind power plays the dominant role in some regions – in others it is solar and bio-mass. Also, it is important to be able to set up various forms of storage technologies – from small capacity for a residence to mass storage for an industrial park. But of course these grids have to be capable of power exchange as well. Only in this manner is a grid able to receive energy from other grids, which are either experiencing over-capacity at the moment or have storage that is full, when it is not able to cover demand short-term during a slack period. Which technology mix is the best for which respective energy grid must be ascertained through respective simulation calculations.

How about large cities and industrial centres? Won’t large power plants be necessary in the future for their supply as well?

Regarding the radical approach of closing down all large power plants and only working with a decentralised network – I don’t think this is right. Instead, one should try to make use of pre-existing capital investments in a sensible way, as long as they are socially accepted and ecologically justifiable. However, if one decides, based on well-considered justifications, to give up the application of nuclear energy, or perhaps to give up brown coal power generation as well, one should first of all think carefully about whether this gap should be filled by a centralised or decentralised supply infrastructure. Supply for the inner-city of Munich is certainly a different task when compared to supply for a community in the Bavarian Forest. A larger gas power plant could also be quite logical for a large city. In this case there are also enough consumers who could use the waste heat from a power plant for their heating.

Energy storage capacities in the form of, for example, batteries for solar energy are currently not very widespread. Why is that?

The future significance of storage technologies is indisputable, since only storage units are capable of converting electricity surpluses from renewable sources into secured power for that period of time in which power production from sun or wind is not possible (“dark doldrums”). Specifically, this means – in a renewable-operated energy system without storage, one would have to keep an enormous power-generating mix available in the event of “dark doldrums”. This is of course very expensive. For comprehensive development of storage infrastructure for short-term and long-term storage of energy, several technological issues are certainly still relevant, which also our own Helmholtz Institute is currently working on. The regulatory basic conditions for storage must however also be improved. I will give you an example: If the operator of a wind-turbine system has to decrease the output of his system today due to over-supply of wind, he will receive federal compensation for the non-produced electricity. This does not exactly motivate him to invest in storage technologies. Besides, only very large users can profit from fluctuating electricity prices at the energy exchange, i.e. by purchasing cheap electricity during peak wind and sunshine times, and selling high-priced stored energy back during low wind and low sunshine times. Thus the market incentive that actually exists for storage is not available for smaller users and decentralised systems. But the most important point is certain –there still exists no mechanism at the moment to adequately compensate the storage operator for actual use of his storage facility. Therefore, storage is cost effective today only under very special marginal conditions. Still, this problem is slowly but surely being recognised, and I think that the basic conditions will improve in the near future.

How can research facilities such as the new Helmholtz Institute Erlangen-Nürnberg (HI ERN) for Renewable Energy Production contribute to further development?

In order to achieve the CO2 reduction goals by the year 2050 (approximately), we need technologies that have not yet been made available to the required degree and costs. This is why we are working on making the key components for such technologies available, safe and affordable. In our Institute and the Jülich partner institutes, we are addressing, among other things, the challenge of converting electricity acquired from renewable sources into hydrogen by means of electrolysis. This hydrogen can be stored in various forms, re-converted back into electricity, and can also be used as fuel for transport, e.g. in fuel-cell automobiles. After all, the term “decentralised energy supply” is limited not only to production of electricity; rather, it refers to the heating sector and mobility as well.

What are the most serious challenges on the pathway to decentralised power supply?

The question regarding whether or not decentralised power supply will work is, in my opinion, no longer in the foreground. Technologically viewed, we already have a handle on a number of things. But on the negative side – what costs would be required for realisation of decentralised energy supply? This has to do with the number of units, and also with the issue of how such decentralised systems would be administrated and their optimisation in practical network dimensions. Furthermore, we have to create the basic conditions for this in order to be able to operate such facilities cost effectively. Who is allowed to feed into the network at what point? Who will pay for the infrastructure? How will storage be compensated? If we aspire to advance decentralised structures, reasonable answers are required first of all – and these would have to be worked out in a dialogue between science, industry and politics.

The European Commission has been criticising the current energy system as not being sustainable enough. At the same time, Europe is supposed to assume the role of trailblazer regarding the fields of renewable energies, electric mobility and energy efficiency – one of the priorities of the recently-appointed Commission is the topic “Energy”.
Therefore, they published in the last week of February a corresponding strategy concerning the so-called Energieunion. This Energy Union is meant to facilitate achievement of the European energy and climate goals by 2030. In addition to the security of supply by means of decreased import dependence and energy diversification, a joint internal energy market is included among the secondary objectives. Moreover, the Commission wants to increase energy efficiency and enrich the energy mix with more renewables. Ultimately, with a view to economic growth, research and investments should be fortified as well within the energy sector. In connection with the re-structuring of the European Commission last autumn, the energy sector was provided with an increase in status – a Vice-President for the Energy Union, Maroš Šefčovič, has taken up residence above other commissioners, for example the commissioner for Energy and Climate. Šefčovič has been appointed the task of coordinating all important issues for the Energy Union and the work of the respective commissioners. The Energy Union should, last but not least, also contribute to the post-Kyoto Protocol, which is supposed to be passed at the UN Climate Conference at the end of 2015.

Interview with the Chairman of the Research Committee of the European Parliament, Jerzy Buzek.