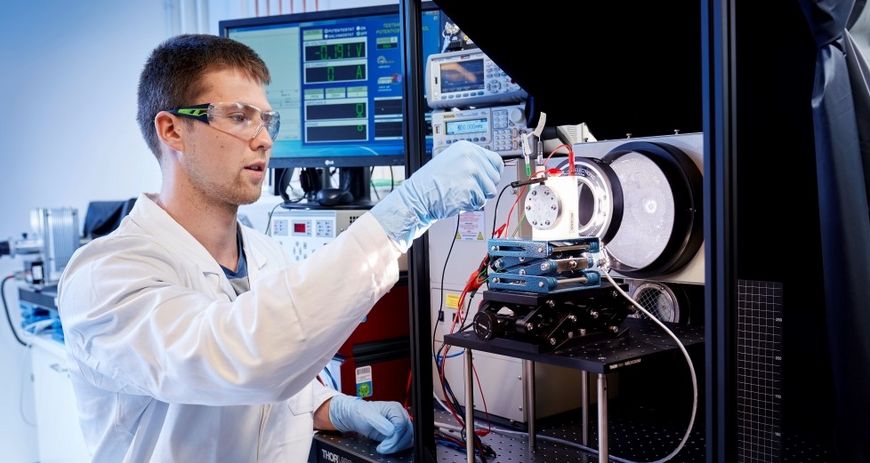 Researchers are developing innovative technologies to produce hydrogen in a CO2-neutral way and to use it extensively. Image: HZG / Christian Schmid

In order for hydrogen to advance the energy transition, it must be produced efficiently and stored safely. Scientists are using innovative solutions to break new ground in hydrogen research.

Hydrogen is one of the keys to a successful energy transition. But the versatile energy source will only contribute to climate protection if it can be produced in a CO2-neutral manner using renewable energies. Researchers are working to make established production processes such as electrolysis even more cost-effective, sustainable, and reliable. One option is combining solar cells with electrolysis devices that convert electricity to hydrogen. “This is no problem technically, at least on a small scale,” says Roel van de Krol, who heads the Institute for Solar Fuels at the Helmholtz-Zentrum Berlin (HZB). In a few years, this technology will be ready for large-scale, cost-effective use, he adds. “But we are already working on the next generation of this technology. In the medium term, solar power will make hydrogen production much more efficient.”

The research team intends to integrate electrolysis and solar cells to form a single module. “In order to produce solar hydrogen, we are combining new photoelectrodes and catalysts to create an artificial leaf,” van de Krol explains. The HZB is cooperating closely with the Helmholtz-Zentrum Geesthacht on this project. The scientists at the Institute of Materials Research are developing photoelectrodes that cost little to produce – up until now, the materials have been very expensive and complicated to produce. The new process will use sunlight directly to split water.

Combining the processes in a single component has three advantages over the concept previously used. First, the temperature of a solar cell can reach 80 degrees Celsius. At this temperature, the cell’s efficiency decreases. But electrolysis cells can use this thermal energy to enhance their performance. Combining the two elements in a single component takes advantage of this. Second, a single component design is more efficient because it uses less material. Third, electrolysis cells operate at a high current density (one-half to two amperes per square centimeter). Up until now, this density has required expensive precious metals such as platinum. But the artificial leaf distributes the same total current across a greater area. Instead of one ampere, only 20 milliamperes per square centimeter are needed, greatly reducing the cost of catalyst materials.

“These materials systems are neither stable nor powerful enough to be deployed yet,” says van de Krol. He and his team have already been able to make the technology more efficient. Researchers can now convert the equivalent of almost eight percent of incoming solar energy into hydrogen. “We are getting to the point where use on a greater scale would be economical,” says van de Krol. “That is the step we are on now.”

A demonstration module with a photovoltaic surface of 50 square centimeters is currently in use. Up until now, the problems have grown as the size increases: The greater the scale of the system, the less efficient it is. Because working with electrolysis involves high pressure, safety requirements increase as the PV surface increases. This drives up costs. “If we can successfully operate the first pilot systems by 2030,” says van de Krol, “and use the concept to produce lots of hydrogen a decade later, that would be great progress.”

Efficient methods of storing all that hydrogen will also be necessary in the future. So far, capturing the volatile gas in a reasonably small space has required either a great deal of pressure (about 700 bar) or extreme cooling: Liquid hydrogen is stored at minus 253 degrees Celsius. Both of these methods involve a great deal of energy and money. “Metal powder enables us to store hydrogen under much more favorable conditions,” says Thomas Klassen, head of the Materials Technology division at Helmholtz-Zentrum Geesthacht. “We can do so at moderate pressure – 10 to 50 bar – and at room temperature.” His team is researching the problem from materials development to the finished tank.

“Hydrogen can be stored in an especially compact manner using metal hydrides because it is not in the form of molecules, but instead is bonded to the metal at the atomic level,” Klassen explains. “In metal hydride, hydrogen atoms take up the space between metal atoms, so to speak, enabling us to store up to twice as much hydrogen as we could just using an empty tank.”

“Metal powder enables us to store hydrogen under much more favorable conditions.”

The prototype for a new, compact metal hydride tank is the focus of the HyCARE (Hydrogen Carrier for Renewable Energy Storage) project. In 2022, a demo system designed for stationary use is to be put into operation in Paris. The storage is to take up one-tenth of the space of previous gas storage systems. A further advantage is energy efficiency: Heat that generally escapes when hydrogen is put into the tank is stored within the system until it is needed to take the hydrogen back out. The storage system will be able to hold 50 kilograms of hydrogen. This is the equivalent of about one megawatt-hour. A fuel cell vehicle can travel about 5,000 kilometers on that much hydrogen. “The system will not be big enough for large-scale use yet,” says Klassen, “but the concept can be scaled up accordingly.”

These storage options are relevant for mobile applications as well – vehicle tanks that use a fuel cell to convert hydrogen to electricity, for instance. One of the keys to mobile storage is developing lightweight materials. They store hydrogen well; the challenge is retrieving it, which can only be done at 300 degrees Celsius or above. The idea of combining two different light metal hydrides was the breakthrough. The researchers have secured a global patent for the concept. “The reaction between the two hydrides provides energy,” says Klassen. “This reduces the heat requirement without making the storage system heavier, so hydrogen can be released at much lower temperatures.” The team has already succeeded in releasing hydrogen at below 100 degrees Celsius.

As an energy carrier, hydrogen offers advantages over battery technology when larger quantities of energy are involved. Batteries are too large and heavy in trucks and buses for the ranges required. Even fuel cell cars can achieve longer ranges (up to 500 kilometers and more already). Hydrogen tanks can also be refilled within minutes. That is why the researchers are working with an automotive manufacturer to test the technology.

“The potential of storing sustainable energy in the form of hydrogen is already tremendous,” says Klassen. “Germans pay about 1.5 billion euros each year in compensation for electricity generated from sun and wind that cannot be stored and is therefore lost. An energy transition that includes a hydrogen strategy will require much more sun and wind energy to be used and stored. Our storage materials can make an important contribution to this.”

"An energy transition that includes a hydrogen strategy will require much more sun and wind energy to be used and stored."