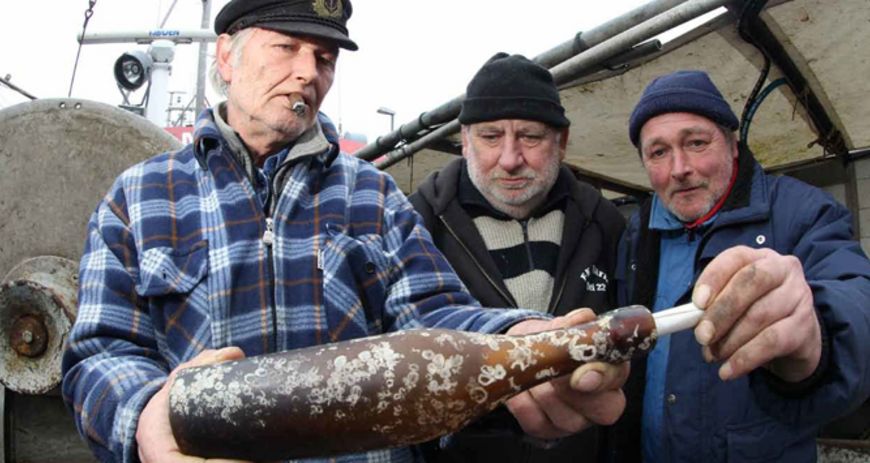 <b>Late delivery</b> Fisherman Konrad Fischer (left) and crew members Klaus Matthiesen and Thomas Buick hold up a message-in-a-bottle on 5 May 2014 in Kiel. The card inside the bottle is dated 17 May 1913. Photos: Uwe Paesler/dpa

The truth is lying on the bottom of the Baltic

A fisherman finds a 101-year-old message-in-a-bottle and sells it for thousands of euros. But can his story really be true? One reader has his doubts – and contacts the editorial office at Helmholtz Perspektiven. An investigation to uncover the truth.

It’s one of those stories the media love – a fisherman pulls what appears to be a very old beer bottle out of the Baltic Sea and finds a letter inside. It was written 101 years ago, in Gothic script. In it, a certain Richard Platz requests the finder to kindly send this letter to his Berlin address. Stamps from imperial Germany are included. A genealogist investigates – and actually finds a granddaughter of the letter’s author. When the genealogist tells her about his discovery, tears roll down her face. The fisherman, who happens to be named Fischer, gets a place in the Guinness Book of Records, as the world’s oldest message-in-a-bottle before that was “only” 100 years old.

This was the story that we read in numerous newspapers and on many websites; we even heard about it on the radio. But is the story actually true?

One person who doubts its authenticity is Werner Paustian, a native of Kiel who was a construction worker for many years. He described his own experiences to the editors of Helmholtz Perspektiven, saying that a bottle swing top, typical in those days, would not be able to survive so many years free of rust. He says, “Over the years I found many beer bottles in attics that had been left by workmen building the houses – the clasps were always very rusty and the rubber seals had perished. I don’t see any reason why it would be different under water.” Paustian thus believes that an air-tight, water-tight seal would not have been possible. He mentions a local diver who retrieved several hundred historical bottles from the Baltic – on none was the wire clasp intact, only the ceramic stopper had survived. “But that wouldn’t make the bottle air-tight all on its own and allow a letter inside the bottle to survive more than 100 years,” says Paustian. As a matter of fact, Fischer didn’t make any reference to a wire clasp; he only referred to a ceramic stopper, which “disintegrated immediately upon opening”.

Can that be? Carsten Blawert is a corrosion expert at Helmholtz-Zentrum Geesthacht. He says that “under certain conditions a bottle can in fact remain air-tight.” It would have been possible, for example, that the bottle was lying in mud, without oxygen contact. Thus the swing top could have remained intact for a long time. “Then perhaps the rubber seal became slightly liquefied, allowing it to work like an adhesive.” This would mean that even if the clasp did subsequently corrode, the water-tight seal could still have held. This is possible, says Blawert, but it can’t be proved. Yet he does find it remarkable that the ceramic stopper is supposed to have disintegrated. “Ceramics stay intact for centuries. That sounds more like a cork covered in barnacles that falls apart when it is pulled out. The fact that he said this happened to a ceramic stopper makes me suspicious.”

The experts who studied the letter itself found it to be genuine, and it is now on display in the International Maritime Museum in Hamburg. But Werner Paustian believes that it could have had a different origin: “Perhaps the letter was taken out of the water a long time ago, when the swing top was still intact?” Maybe somebody waited many years, until the discovery could be regarded as a sensational discovery? “In any case, nobody has been able to explain to me how a ceramic stopper could just disintegrate like that!”

Will we ever find out what really happened? In the meantime, Konrad Fischer has received a four-figure sum for the message-in-a-bottle, which has enabled him to repair his boat. In the end, whatever really happened, and when, is some- thing only the fish can ever know for sure.