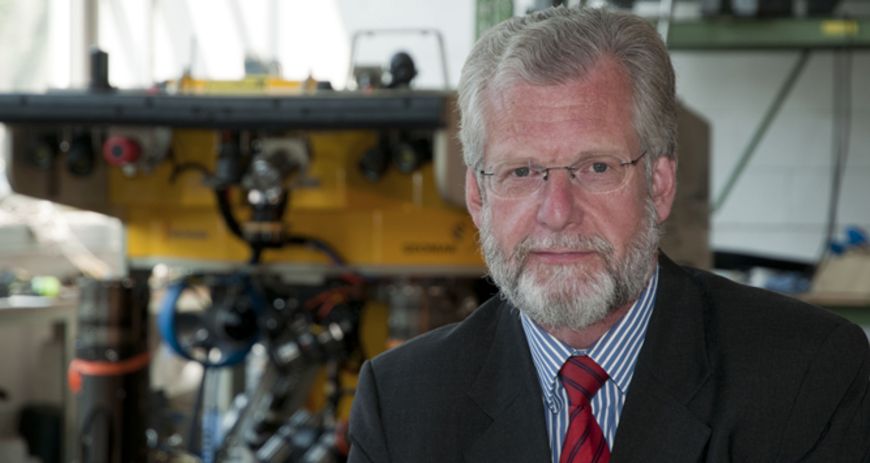 Searching for treasure in the deep sea

As a young research scientist Peter Herzig ploughed through the ocean in 1983, in order to find the previously unknown “black smokers”. As Director of the GEOMAR Helmholtz Centre for Ocean Research in Kiel he is currently working to assure that other scientists are able to make such expeditions.

Ploughing through the ocean for almost two months on a big research ship and discovering new things every day – for Peter Herzig this adventure dream was fulfilled in 1983. The young geologist from the Lower Rhine region actually didn’t hesitate very long after being invited to join the expedition in the Indian Ocean. The research crew was supposed to track down thermal springs on the seabed, so-called “black smokers”. The first such springs had been found in 1979, and their discovery represented more than simple academic curiosity. This is because hydrothermal springs contain sought-after metals such as copper, zinc, silver and gold in high concentrations.  “We found new springs almost every day”, enthuses Herzig in hindsight, “there was unbelievable euphoria on board.”

Today he is working to assure, as Director of the GEOMAR Helmholtz Centre for Ocean Research in Kiel, that other scientists are able to make such expeditions. His institute is included among the international leading facilities in its sector and employs around 900 workers. They have a modern equipment fleet at their disposal: research ships, a manned submersible, remote-controlled underwater robots, and other autonomous systems. Raw materials from the sea have become an increasingly important research area: “In this context, we are looking for ways to exploit these resources that are as far as possible environmentally friendly”, says the 61-year-old.

Since that first expedition more than thirty years ago, more and more natural resources have been discovered. In the meantime, gigantic deposits of gas hydrates for energy production and large reservoirs of metallic raw materials have been substantiated. Many of these materials required millions of years to grow in manganese nodules in the deep sea, or in the cobalt crusts along the flanks of underwater mountains.  Sprinkled metal sulphides, along with copper and gold, indium and germanium, mature in those locations in just a few thousand years.

“Actually, we don’t need to search in the deep sea in order to find sufficient supplies of such raw materials”, says Peter Herzig. In principle, the land reserves are enough for everyone – even if the world population reaches nine billion human beings, as predicted for the year 2050. The requirement for this supposedly is, however, free international trade without monopolies, which is presently the case for platinum and palladium. An export embargo initiated by China a few years ago caused a lot of commotion, and led to a temporary scarcity of rare earths. Herzig: “In the context of such imponderables, exploitation of such marine resources is certainly expedient.”

There is to date no country that is mining ores from the sea bed, but there are already respective preparations in many locations. And Germany as well possesses a license for an exploration area the size of Bavaria in the Pacific Ocean. It is valid until the year 2021 and is presently being used for research. The focus is on the sensitive ecosystems in the deep sea and their reaction to typical mining activities. The swirling up of sediment is the biggest problem, says Peter Herzig, because the particle storm that arises could negatively impact sea organisms. “Only when we have tackled the problem with an innovative method can we start thinking about mining.”

Accordingly, the Kiel scientist would like to have an industrial partner at his side: “But Germany has in the meantime lost their once profitable exploration and mining firms.” In order not to entirely fall behind vis-à-vis robust mining nations such as Australia or Canada, Herzig proposes the establishment of a government-backed firm. The Federal Ministry of Economics is currently contemplating the idea. Herzig expects further positive reception in two or three years: “Presumably, the first exploitation of ores from the deep sea will then begin off the coast of Papua New Guinea – that will set off an avalanche worldwide.”

Peter Herzig has a penchant for application-based research: “That I am not a born basic researcher is something that I realised early on.” He therefore specialised, after his studies in geology and mineralogy at the RWTH Aachen, in economic geology. He wanted to find raw materials, and he did just that: whether as terrain geologist on Cypress, as junior scientist in Toronto Canada, or as scientific assistant in Aachen.

His wife accompanied him frequently over long segments of these journeys – and later their children were also included. In the meantime his daughter is 27 – she is a professional journalist. The 25-year-old son has recently completed an economic science Erasmus-Mundus Master’s Degree programme.

Shortly after the political change, in 1993, the family moved from near Aachen to Freiberg in Saxony, where Peter Herzig assumed the Chair for Economic Geology and Petrology at the steeped-in-tradition Bergakademie.  Ten years later he went to Southampton in Britain, and then to Kiel.  There Herzig was appointed Professor for marine geology at the University, and shortly thereafter Director of the Helmholtz Centre for Ocean Research Kiel, which belonged to the Leibniz Association until 2011.

The science manager often travels throughout the world – to conferences representing his own centre, and also since the beginning of 2015 frequently as vice-president of the Helmholtz Association.  Only recently he was able to mediate a long-term research contract involving a 3.4 million euro agreement with Oman.  Peter Herzig seldom has time to put his feet up.  Chores await him at home in a small horse-riding facility that he operates together with his wife in a village near Kiel. He likes to go for walks with his dog, a Labrador, through the Schleswig-Holstein landscape.  And he also now seeks out R&R on the sea – as a sailor in warm waters, preferably the Adriatic Sea.

Peter Herzig has participated in 25 oceanic expeditions, he was 6000 metres below sea level in the French submersible Nautile, and has penetrated down to depths which nobody before him had ever seen. Despite all his activities on land, doesn’t such a person ever miss the adventure of the open sea? “Yes, I do”, says Peter Herzig. “But maybe I’ll get back to that in the next few years.”