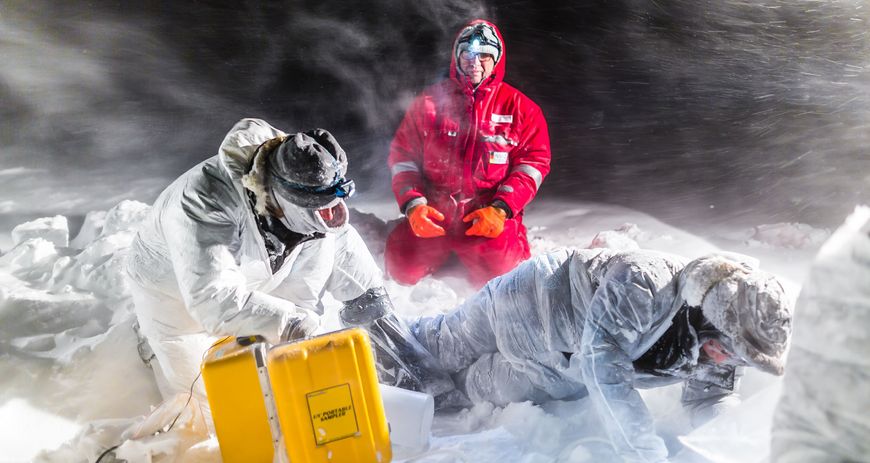 The largest polar research expedition in history is set to begin in fall 2019. The Polarstern icebreaker will spend a year trapped in a massive ice floe as it drifts by the North Pole and collects data that will benefit many generations to come.

Only a few dozen researchers live in the Norwegian village of Ny Ålesund, one of the northernmost settlements in the world, on this day in March day as a man floats on the ice-cold water in a somewhat remote area of the fjord. His body hovers on the surface of the water as if by magic. The man in the water is Potsdam-based atmospheric researcher Markus Rex from the Alfred Wegener Institute, Helmholtz Centre for Polar and Marine Research (AWI). When Rex first arrived in the village on the island of Spitsbergen 27 years ago, the fjord he is now floating in was still a landscape of ice and snow. He often crossed it on skis or by snowmobile. But it’s now been 10 years since the fjord last froze over.

After a couple of minutes, Rex suddenly uses his arms to paddle to shore and drags himself onto land. He eagerly approaches the group that has been watching him with rapt attention: “This is it,” he cries, “this is the perfect survival suit for our expedition!” The team will need the very best equipment to implement their plans, as the temperatures will be even lower and the wind much stronger where they are heading.

On the evening of September 20, they will set sail on the Polarstern icebreaker. Their destination is the central Arctic, where the vessel will be trapped in ice as it drifts by the North Pole for a year. A team of 100 people from 17 countries will be on board the Polarstern, with the crew rotating every two months or so. The ship will be converted into a mobile polar station propelled solely by the natural force of the sea ice.

“We’re probably the last generation that will see the Arctic covered in ice all year round.”

“The Arctic is the epicenter of global warming. But unfortunately, we don’t really know what that will mean for us in the future yet,” says Markus Rex. “That’s because we have very few observations from the central Arctic and practically none that were made in winter.” Rex is head of the MOSAiC expedition, which will also be the first to travel to the North Pole region in winter on a modern icebreaker. The climate processes there are a piece of a puzzle the team needs to solve in order to improve global climate change forecasting. “The climate changes that happen in the Arctic don’t stay in the Arctic. It’s also where our weather in central Europe gets made,” he says.

The team doesn’t know exactly where the ice drift will take the Polarstern. But they already know one thing for certain: There will never be another expedition like this one. “We’re probably the last generation that will see the Arctic covered in ice all year round,” says Rex. “If things continue the way they are, by the second half of this century, we’ll be able to take a dinghy from the port of Hamburg to the North Pole and have a glass of champagne there in the summer.” But sailing will be just the beginning: The first container ships are already crossing the Northeast Passage as they travel between Europe and Asia. A new world is emerging to replace the old at the North Pole, which many expeditions failed to conquer in times gone by⁠—and nobody knows for certain how the rapidly increasing temperatures will impact the ecosystem and our climate.

Meanwhile in Ny Ålesund, the team has been testing setting up an enormous tent that will house a tethered balloon on the expedition. One of them is physicist Verena Mohaupt, who belongs to the generation of polar researchers that have only seen open water in the fjord at the edge of the village. Mohaupt coordinates many areas of the expedition’s logistics—in addition to preparing plans, writing manuals, and organizing training sessions, she tracks down countless pieces of equipment for the vessel. “Shortly after I took this job, I met with Markus Rex for dinner in Bremerhaven,” she recalls. “I hardly ate anything that night, but the pages of my notebook were full.” Mohaupt wrote down terms like ‘fuel depot’ and ‘evacuation routes’, along with the names Fedorov, Makarov, Oden, and Xuelong II—the four icebreakers that will provide the expedition with supplies and rotate personnel. By the end of the evening, she realized that she was involved in choreographing logistics of a complexity never seen before in the central Arctic. In any case, Mohaupt has to plan for the unforeseen: “There are a lot of things that we can only decide on site.”

The site she is referring to is an ice floe that will be located at approximately 130 degrees east and 85 degrees north when the expedition begins. Once the head of the expedition has approved a location for the ship to freeze into the ice and the captain sets the engines to idle, the most exciting part of the project will begin. Within a few days, the team will have set up a small research city on the ice. It will be a constant race against time. Soon after they arrive, the sun will be barely rising above the horizon each day before it finally gives way completely to the polar night. “We’ll need everyone to pitch in when we’re setting up. We will have to drill holes, make paths, put up tents and lay power lines,” says Mohaupt.

The team already has a plan similar to a city map, which offers a glimpse at what will be happening on the ice. Measuring stations will rise high into the sky at a radius of several hundred meters around the vessel. There will even be an airstrip on the ice during the winter so the Polarstern can serve as the starting point for research flights. The icebreaker will become the center of a network of independent measuring stations located at distances of up to 50 kilometers away.

Sea ice physicist Marcel Nicolaus from Bremerhaven drew up the plans for the research camp. Dividing the research area into precise zones is key, he says: “If we don’t stick to specified paths and areas, we won’t have any unused surface left by summer at the latest.” And intact ice is vital for the team’s research. The plan also includes areas around the ship that will not be illuminated, so biologists can analyze the behavior of living organisms in the dark without the effects of light pollution.

“We’re looking at the big picture, so this expedition will find answers to one of the most pressing questions of our time.”

The researchers will be working in harsh conditions. All of the expedition’s participants have prepared for this by training under conditions that are at least partially comparable to those in the Arctic. Sixty team members spent two weeks on a course in Finland at the end of March, when the temperatures at the beach on the island of Hailoutu fall below minus 20 degrees Celsius. The program followed a strict routine. Every morning after breakfast, the participants made their way to the nearby sea ice. Here, they worked through various stations, similar to an extended circuit training session. This included driving snowmobiles, measuring the thickness of the ice, sawing holes in the ice, and removing ice cores. “The team didn’t just learn a lot about working on the ice in Finland,” notes Nicolaus. “It was where the expedition actually started for many of us.” From that moment on, he says, MOSAiC became more than just reading charts, plans, and e-mails.

The questions that the researchers want to investigate on the expedition are closely interlinked. How exactly does sea ice develop? What happens when the layer of ice breaks open and the comparatively warm ocean water comes into contact with extremely cold air? What does the polar night do to the ecosystem before the area under the ice bursts into life in spring? “We’re looking at the big picture, so this expedition will find answers to one of the most pressing questions of our time — why is the Arctic a driver of global warming?” says Markus Rex, summing up the enormous expectations for the project.

When the expedition sets off on September 20, it will become clear what the team’s years of preparation have achieved and how their plans will stand up to the relentless reality of Arctic conditions. The Polarstern will be packed to the rafters, and Verena Mohaupt knows that the equipment and supplies will have to last for the months ahead, come what may. Soon thereafter, Marcel Nicolaus will stand at the ship’s railing and see how much the ice camp actually resembles his initial sketches on graph paper. And Markus Rex? He just might make a note in the ship’s logbook that humanity has never before been so close to solving the riddle of the central Arctic.