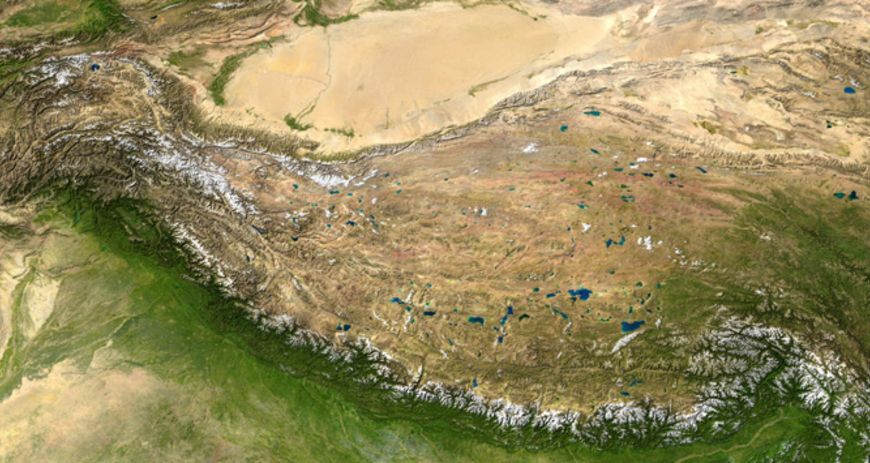 A crash in super slow motion

The severe earthquake in Nepal at the end of April shifted the earth’s surface by several metres at many locations. These powerful forces arise from the convergence of two continental plates – and have been recurring for 50 million years.

A human lifespan in relation to the history of our planet is as short as the blink of an eye. This is the reason that it is so difficult for us to perceive changes that drag on over millions of years. Mountain ranges appear to us to be static and scarcely changeable. They were, however, created in a dynamic process – as a result of a collision between two tectonic plates. In the case of the Himalayas, this process has been continuing until this day. About 50 million years ago, the Indian and the Eurasian continental plates collided. Ever since this convergence, they have pushed into one another to a distance of around 2,000 to 3,000 kilometres with a velocity of five centimetres per year. The geologists speak of convergence here. And these plates are still doing it – at the same speed. Prior to the collision, they were moving towards one another at a speed of more than ten centimetres per year. This motion of slowly sliding into each other can be felt in the form of frequently occurring earthquakes, in which the built-up tension is released.

“Four to five centimetres per year are actually quite fast for the movements on earth,” explains Lothar Ratschbacher from the Technische Universität Bergakademie Freiberg. He says that it is unusual that it is still continuing. Other convergences between continental plates have come to a standstill much quicker. For example, in the case of the African and European tectonic plates this caused the emergence of the Alps, among other things. Exactly why this collision between the Indian and Eurasian plates represents an exception is being actively discussed in the scientific arena, says Bernd Schurr from the Helmholtz Centre Potsdam – GFZ German Research Centre for Geosciences. There are three models which clarify the phenomenon. One is based on the premise that the Indian plate – a thick plate today – originally had an approximately 1000 kilometre long, thin continental margin. This margin was in fact thinner, but on the basis of its composition heavier than the edge of the Eurasian plate, and therefore pushed itself down underneath it: “It could have the force to continue pulling the Indian plate into the Eurasian plate,” explains Schurr, who conducts research on tectonics and the geodynamic processes in mountain ranges.

In a second model, the scientific community assumes the existence of huge, so-called convection cells within the earth’s mantle. It is a principle that is similar to what happens inside a cooking pot: cold material sinks because it is heavier than warm material – it is then heated and rises again and so on. Cells can thus form in which, on one side, cold material sinks and, on the other side, warm material rises. These convection zones could continue to force the plates upward from underneath, and continue to push, like on an assembly line, the Indian plate into the Eurasian plate. In the third model the possibility is also being discussed that the Indian and Australian plates are somehow interconnected. Because the heavy Australian plate is submerging underneath Southeast Asia, it could possibly pull the Indian plate downwards.

Nepal and also the Himalayan Mountains appeared as a consequence of the convergence between the Indian and Eurasian plate, as a crumple zone, so to speak. “Usually, the plate that is pushing underneath – the Indian, in this case – is shortened, and that’s where most of the mountain range is formed. Regarding the Himalayas, we have deduced that the plate has been shortened by between 700 and 1000 kilometres since the collision,” says Lothar Ratschbacher, tectonic physics instructor in Freiberg. That is less than the length that the two plates have pushed into each other overall. This is because it is not only the Himalayas that have reacted to the pressure over the course of millions of years: “The formation of mountains occurs outwards, and in the case of the Indian-Asian collision zone, this means to the south and to the north.” In other words, Tibet and other ranges, for example the Tian Shan, folded and are still folding.

But of course, this folding process in the earth’s surface certainly did not (and still does not) go unnoticed, Lothar Ratschbacher clarifies: “All deformation in the upper 10 to 30 kilometres of the earth’s crust occurs due to earthquakes. This is due to the fact that the low temperatures prevailing there only allow brittle deformity of the rock.” This is why the earth in Nepal quaked, and in the Himalayas the rock pushed either up or down at some locations. Underneath the Himalayas and Tibet, temperatures of 1000 degrees Celsius occur in the crust, which is up to 70 or 80 kilometres thick. This is the reason that no fracture occurs there – and thus no earthquakes occur either.

Large earthquakes, like the one in Nepal in April, must have occurred countless times in the course of the last 50 million years. Bernd Schnurr is hesitant to make a speculation on when the collision between the two plates will come to a standstill. But it is certain that at some point – in the course of many millions of years – the time will come when the earth in this region no longer buckles. “The force of gravity in the stacked-up mountain ranges works in severe opposition to the driving forces behind the plates,” he says.