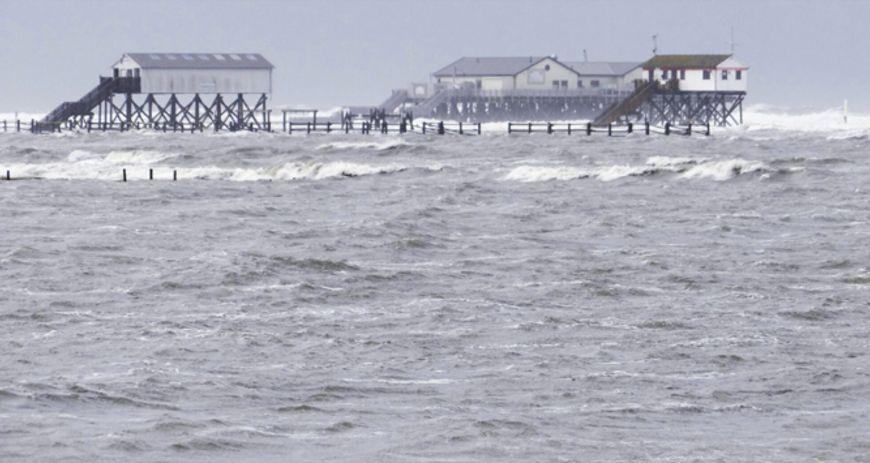 Soon to become a familiar scene? On 22 October 2014 these stilt houses on the beach in the seaside town of St. Peter-Ording were deep in the water. Hurricane Gonzalo brought the season’s fi rst storm tide to the North Sea coastline. Photo: Daniel Friederichs/dpa

Mr Lemke, you use model calculations to predict the climate of the future. How do things look for Germany at the end of this century?

That depends on whether we continue to release as much CO2 into the atmosphere as we are doing now. If we continue to do this, we’ll have to expect sea levels about one metre higher. The temperature will rise by three to four degrees on average. As early as 2040, very hot and dry summers like in 2003 will be the norm. The winters will be milder and bring more rainfall.

What does this mean for individual regions in Germany?

People on the coasts can tolerate a hotter summer, since there is more of a breeze there. On the other hand, in a city such as Stuttgart, situated in a valley, things will get stuffy. The Alpine foothills will experience increased orographic or relief rainfall. And there won’t be much left of the Alpine glaciers. In a region such as Brandenburg, which already has hotter summers than other places in Germany, things will become even more extreme.

What effects will rising sea levels and higher temperatures have?

We’re going to have to raise the dikes by one metre. This is doable, of course, but it will cost a lot of money. And it will take up more space as well, since a higher dike will need wider foundations. In other regions in the world, for example in a fl at and bifurcated river delta, this will not be possible. In those areas, large numbers of people will have to be relocated. But the hot summers will lead to problems here in Germany, too. For one thing, it will be a problem for agriculture, which can’t survive without irrigation. But that will presumably be manageable as well, since there will be more precipitation in the winter to replenish the groundwater. On the other hand, it will be a problem for people – in the hot summer of 2003, there were about 20,000 heat-related fatalities, and summers like that will be normal from 2040.

Will we have to cultivate different plants than we do today?

Yes. Forest workers are already asking us what kind of trees they should be planting now, trees that will be harvested 50 years later. For some native trees such as spruce, the dryness will cause problems. Conversely, the Douglas fi r, a conifer from North America, could do quite well in a warmer and drier climate. But it is not a native tree and it is not, in that sense, suited to our ecosystem.

Will there be more extreme weather events?

That is still difficult to predict, since extreme weather events occur with relative infrequency, meaning that we have few data from the past that we can use for predictions. It’s clear that a warmer world will have greater humidity, which increases the likelihood of precipitation. We have observed that hailstorms increased between 1970 and 2000, particularly in southern Germany.

What is the reason for that?

Hail originates in storm clouds. These are towering vertical clouds formed from water vapour carried by powerful upward air currents. If the cloud is high enough and the updraft strong enough, the water droplets turn to ice. The higher the clouds and the stronger the updraft, the bigger the hailstones become. Once they are large and heavy enough, they fall as hail. The strength of the upward current depends on the heat at ground level – which is getting hotter as a result of global warming.

Imagine we would succeed in reducing our Co2 emissions. What could we expect then?

If we could actually do that, it would be possible to reduce global warming by two degrees. The basic requirement for this, however, would be that we produce practically no CO2 after 2070. This twodegree target is on the table in the climate negotiations between heads of state and government. In order to reach this goal, the nations have to agree on legally binding targets for the reduction of CO2 emissions.

<b>Peter Lemke</b> is Professor for Environmental Physics at the university of Bremen. Until his retirement on 30 September 2014, he headed the Climate Sciences division at the Alfred Wegener Institute, Helmholtz Centre for Polar and Marine Research. Since 2009, he has been scientific coordinator for the Helmholtz Climate Initiative REKLIM, whose Managing director is Klaus Grosfeld. Nine research centres from the Helmholtz Association work together within REKLIM to produce increasingly precise regional and global climate models based on readings taken on the ground, in the air and in the ocean, as well as on satellite observations and computer simulations: www.reklim.de/en
The Helmholtz Association’s regional climate offices and the Climate Service Center also help decision-makers to assess the risks and opportunities of climate change and to develop avoidance and adaptation strategies.
Hear more about REKLIM and hail research in two audio fi les on science podcast resonator (in German only): https://resonator-podcast.de/https://resonator-podcast.de/