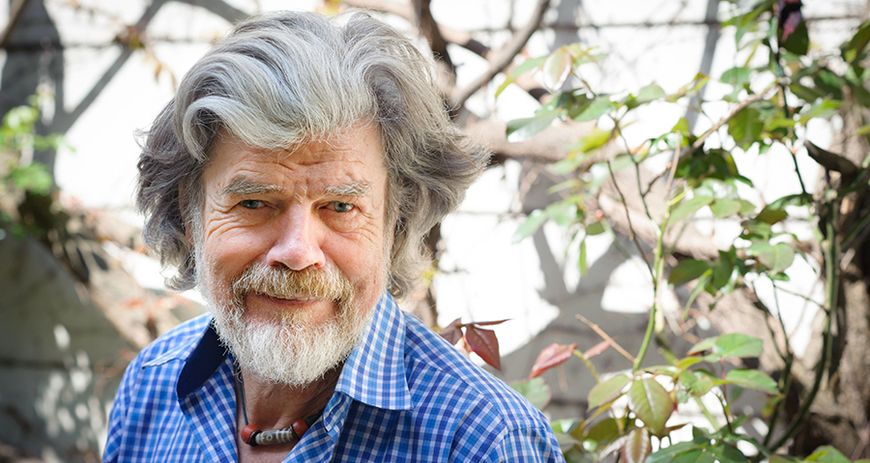 “Such an expedition can be done only once”

In an interview, Reinhold Messner explains why he is eagerly awaiting the results of the largest Arctic expedition ever, how he experiences climate change in his home country and why he would never fly into space.

I have. And I am curious to see what scientific results the expedition will bring to light. It will of course take years to evaluate everything. But I am sure that we will learn a lot about many issues, be it drift, marine life, ice thickness and the interaction of these components.

Would you have been tempted to join such an expedition?

I am not a scientist and would have been just an appendage. If I were to do something like that, it would be more like Fridtjof Nansen did with his ship "Fram". He is the historical role model of the expedition and dared to do the same thing 120 years earlier. The audacity to simply sail into the Arctic under the conditions of the time and let oneself drift with the drift of the ice, and then get out of the ship to march towards the pole, is one of the most beautiful adventures that has ever taken place. I would have loved to be there - unfortunately I was born too late.

MOSAiC expedition participants report again and again how quickly the conditions change. The ice in the Arctic is very dynamic. The researchers had to clear the ice floe again and again because of ice pressure, which quickly builds up several meters or cracks in the ice with open water. You probably know this well.

Yes, I was on the pack ice myself. Unfortunately I didn't manage to get from Siberia to Canada via the North Pole. Once I almost sank because of terrible ice pressure. I experienced how an open water surface forms an ice layer overnight over which you can walk. It is not easy to get along under these conditions.

They are known for the good preparation of their expeditions. Planning and logistics were also crucial for the MOSAiC expedition.

For sure. Such an expedition costs a lot of money and you can do it only once. The question of who is researching what, with which instruments, at what time, all this had to be planned in detail in advance. That was certainly as sophisticated as the preparation for a space flight. I am really extremely curious to see the results in a form that even I, as a non-expert, can understand. But as I said, I also realize that I still have to have a little patience.

The Arctic is changing due to climate change like no other region on earth. Scientists predict that in a few decades it will be ice-free in summer. How do you perceive these changes?

It is obvious that the Arctic is losing ice very quickly. Nobody can say exactly how long it will take until it is really ice-free. Neither can anyone say what it will really mean if that is the case. Certainly, this will also have an impact on the Gulf Stream. If that fails to happen, it could even lead to cold waves in Europe.

Where else do you see signs of climate change?

Here in my homeland in South Tyrol it is clearly noticeable. There are storms of an intensity and frequency that were not seen before. A few days ago we experienced a storm here in which tables flew 100 meters through the area. It was difficult to get the people to safety. I had never experienced anything like that before. It doesn't rain any more than it used to, but the precipitation comes down more often in heavy downpours. The seasons have shifted backwards. There is absolutely no question that climate change is happening. Why it is there, the scientists must answer.

And in the mountains?

I have been observing for about 20 years now that the shrinkage of the permafrost has caused huge debris, some of it larger than high-rise buildings, to fall out of the mountain walls. The frost no longer holds the rock together like putty. When it thaws, the boulders slide off. This of course makes mountaineering more dangerous.

Didn't that exist in the past?

Not in my lifetime. But at the foot of the Dolomites there are huge boulders that must have fallen down about 5,000 years ago. It can't have been much longer than that, because they are not very weathered. It is well known that there was a warmer phase around this time. I would like to ask the scientists about the reasons for this warm period.

Many unexplored and for humans inaccessible places do not give it nowadays no more. The next adventures will probably look for humans outside our planet.

Nothing against the exploration of outer space and other planets but the idea that we humans could live on Mars, I think it is absurd. Also for the next 100 years. The logistics for this would simply be too gigantic. It would also be unfair if a thousand people were actually to fly to Mars and a huge tax budget were to be sacrificed. The Mars habitat is hostile to us humans. And the question of how we should produce our food there is a completely different problem. Humans are adapted to the environmental conditions on planet Earth. We only have this earth and if it goes under, we cannot all leave it.

Does the idea of leaving the earth for some kind of expedition as a border crosser appeal to you personally?

No. Even if I were paid for it, I wouldn't do it. I couldn't contribute anything to such a project. I would get bored. Adventure has to do with experience and personal responsibility. I make experiences about our existence and also about the changes that are taking place like climate change. When I study the books of Nansen or Shackleton, for example, and then go to these regions myself and relive their adventures, I see the changes. I don't have to leave the earth for that.

Thank you very much for the interview!

On 12.10.2020 from 14:00 to 16:00 o'clock the Helmholtz annual conference takes place. This year it will be virtual, at three locations and open to everyone. A highlight will be the return of the Polarstern. Reinhold Messner is also our guest. He will talk to a crew member about climate change and borderline experiences. Further information and the complete program can be found behind the following link: