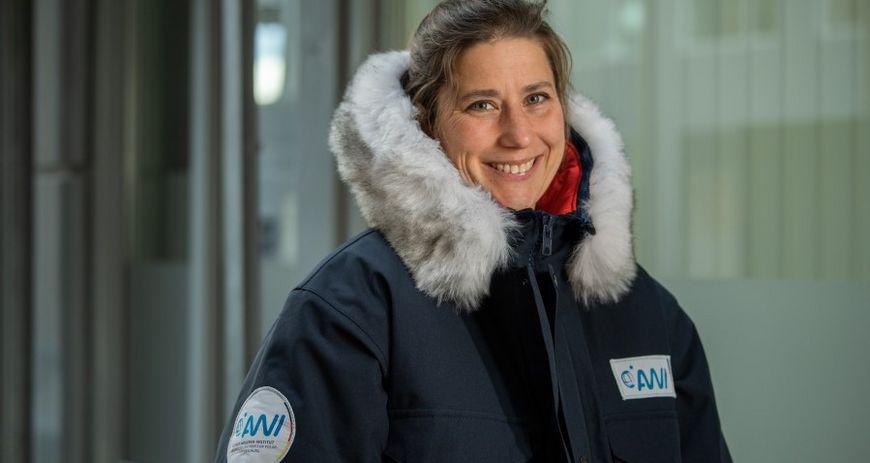 Physicist Verena Mohaupt coordinated the logistics of the largest Arctic expedition ever and was also responsible for the safety of the participants during the MOSAiC expedition. Image: AWI/Esther Horvath

Experienced planner with talent for improvisation

As logistics coordinator of the largest Arctic expedition ever, Verena Mohaupt ensured smooth and safe operations on board the "Polarstern". She enjoyed seeing how her concepts worked out in practice - even though the Corona pandemic threw many plans out of kilter.

"I don't really like superlatives," says Verena Mohaupt. And yet big projects seem to attract her. Already at the age of 31, the physicist took charge of the joint polar research base of the Alfred Wegener Institute (AWI) and the French Paul Emile Victorin Institute in Ny-Ålesund on Spitsbergen, one of the northernmost settlements in the world. And then MOSAiC: a research vessel, hundreds of researchers, collecting data for a whole year and getting closer than ever to the North Pole in the middle of the Arctic winter. Verena Mohaupt coordinated the logistics for the entire undertaking. For this, the trade magazine Nature named her one of the ten people who had a decisive impact on science in 2020. "Of course, the task initially instilled respect in me," says the 37-year-old. 70 tons of equipment from over twenty countries had to arrive on time in Tromsø, Norway, and be stowed on the ship. After the first meeting with expedition leader Markus Rex, her head was spinning, she says. "But then I saw the task for what it was: a big work package."

MOSAiC stands for "Multidisciplinary drifting Observatory for the Study of Arctic Climate." During the largest Arctic expedition ever, scientists from 20 nations explored the Arctic throughout the year. From September 2019 to October 2020, the German icebreaker "Polarstern" drifted frozen in ice through the Arctic Ocean. MOSAiC was realized under the leadership of the Alfred Wegener Institute Helmholtz Centre for Polar and Marine Research (AWI).

In addition to coordinating the expedition procedures, Mohaupt was responsible for the safety of the participants together with her colleague Bjela König. For three weeks, the two women explored cold rooms, laboratories and storage areas on the "Polarstern" - albeit in summer temperatures between Gran Canaria and Cape Town, when the research vessel was still heading south to Antarctica in 2018. To prepare themselves and the scientists for the Arctic conditions during the expedition and to test their equipment, König and Mohaupt organized safety training courses in Tromsø, Norway, and on Spitsbergen. For example, participants practiced pulling themselves or others out of the icy water back onto the ice after an accident. Many of the scientists also learned how to look out for polar bears in the permanent darkness of the polar night and how to shoot at them in an emergency, in order to support the safety team in the polar bear watch.

Planning ahead and a dash of spontaneity
"It was great to see how what we had designed at the desk worked in training," Mohaupt says. She likes the mix of planning and the research work in the field. "Being in the field is incredibly fun for me," she says. "Still, there are boring moments there, too." And boredom is one thing: "For a polar bear guard, boredom is the biggest danger," Mohaupt says. "Standing in one spot for three hours in the dark at -30°C is insanely exhausting, your attention wanes."

"Being in the field is incredibly fun for me."

The physicist spent almost nine months on board the "Polarstern". In order to survive even strenuous facets of the expedition in the confines of the ship, the cold of the Arctic and months of darkness of the polar night well, the AWI researcher took two things with her: Knitting and pomegranates. "Knitting allowed me to switch off from the rigidly structured routines of the work days, when we were almost never alone," she says. Taking something with you to enjoy all to yourself is something she recommends to anyone going on an expedition. She then knitted headbands from wool scraps, which went straight into use with her colleagues. And the pomegranates? "They kept in the fridge for months, and then every now and then I celebrated having fresh fruit."

Mohaupt studied physics in Bielefeld and Paris. She coordinated an information tour of the German Greenpeace ship on the topic of Arctic protection before taking over the management of the research station on Spitsbergen. "My experience naturally helped me to keep track of things and plan ahead when coordinating MOSAiC," says the scientist. Still, she sometimes felt thrown in at the deep end - and not just during safety training. "But then I could count on the support of my team and the logistics department of the Alfred Wegener Institute with all its expertise."

"You have a plan B, C, D and X - and then a virus like this comes along and just thwarts all the plans."

The key to successfully running a business in these dimensions is "as much preparation and planning as possible," she says. That allows participants to react flexibly in critical situations, she adds. "And, of course, a good dash of spontaneity." She proved that herself time and again. For example, when she realized on the trip to the Arctic that she couldn't use the carriers for the power grid as planned. "We then improvised and sawed what we had to size and tied it together so that it fit again," Mohaupt recounts.

Back to the Arctic on short notice
In the spring of 2020, the Corona pandemic shook up the entire Arctic expedition schedule. "There you have a plan B, C, D and X," Mohaupt says. "And then a virus like this comes along and just thwarts all the plans." At times, the continuation of the venture was at stake. Many researchers' round-trip routes were cut off and visas expired, while operations were delayed. "There were uncertainties and question marks everywhere," Mohaupt recalls. When colleagues dropped out, she unceremoniously returned to the "Polarstern" from her shore leave two months earlier than planned. "Just ten days before I had to go into quarantine, I decided: okay, I'm already going," she says with a laugh.

Born in Westphalia, she commuted a lot between Potsdam, Bremen and the Arctic for the expedition. After her return, she moved permanently into her Potsdam flat-sharing community, which she calls her "warm elective family with a lot of hustle and bustle. Readjusting after months in the ice and at sea isn't easy for her. "Actually, you would have a big party," she says. "But due to Corona, I can only meet my friends individually or online. That's already missing something." She has swapped her polar bear guard post for her desk at the Alfred Wegener Institute; instead of sitting among stacks of boxes, she sits in front of potted flowers and white bookshelves. "I allowed myself a longer vacation without a rigid daily structure and like to take my time in the morning," she says. She is currently coordinating the work of the research station on Spitsbergen. "But I'm also excited to see what new adventure is in store for me."