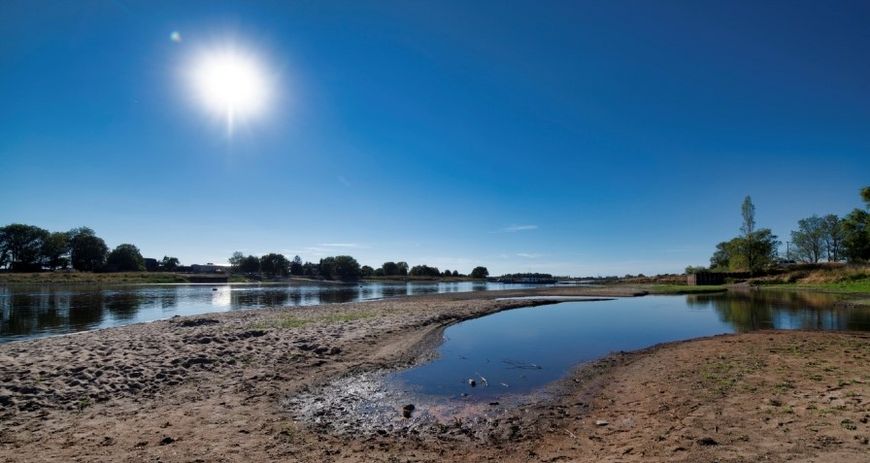 As dry and hot as never

Periods of drought have always existed. In recent years, however, they have been much more extreme than before, both in Germany and worldwide. Researchers expect this trend to continue. One reason for this is climate change.

April 2021 was the coldest April in Germany in 40 years. At the same time, the month was significantly too dry, as reported by the German Weather Service. The rain of the last few weeks was not enough to reach even the deep soil layers and compensate there for the water deficit from the last warm years. And with the sudden change in weather - sunshine and rising temperatures - the soils will continue to remain too dry.

In the future, droughts in Germany could be even more extreme than in recent years. This was recently reported by researchers at the Alfred Wegener Institute (AWI), Helmholtz Centre for Polar and Marine Research, in the journal Communications Earth & Environment. "We have to be prepared for the fact that extreme droughts may occur in Germany in the course of climate change, causing even greater damage to agriculture and forestry," says AWI climatologist and lead author Monica Ionita-Scholz.

In recent years, exceptional droughts in Germany have caused numerous damages, including crop losses in agriculture, diseased and damaged forests, and drinking water shortages. At times, ships could no longer sail due to low water; and energy supplies were restricted because power plants could not be cooled sufficiently.

To find out which factors drive the droughts in detail, the AWI team analyzed currents in the North Atlantic and air pressure patterns - in other words, central factors that play a major role in determining the weather in Central Europe. And that's not all: The researchers also evaluated historical climate data from the past millennium, which scientists around the globe have compiled on the tambora.org website. This collection of data on environmental and climate history unites climate parameters such as temperature, precipitation, storms and floods, which provide a wealth of data, particularly for Germany.

Megadroughts existed many centuries ago

For example, the AWI researchers used these data to determine that megadroughts already occurred between 1400 and 1480 and between 1770 and 1840 on the territory of what is now Germany. "These decades-long droughts were driven by a high precipitation deficit in the transition from winter to summer," says Monica Ionita-Scholz. She says they occurred mainly when there were weakly fluctuating ocean currents in the North Atlantic, low solar radiation and stable atmospheric pressure over the North Atlantic and North Sea. "The three factors are part of the natural variability. What was special was that they happened to overlap at the same time in the two droughts we analyzed, leading to particularly prolonged droughts," Ionita-Scholz says. The megadroughts cannot be compared with today's drought events, however, because at present it is not so much precipitation that is declining, but above all temperatures that are rising. As a result, evaporation increases and soil moisture decreases sharply, causing damage to agriculture and forestry.

An international research team with the participation of the Helmholtz Center Hereon went even further back into the past. The scientists, led by the University of Cambridge, reconstructed the summer climate between 75 B.C. and 2018 using oak wood from historical wells, pile dwellings, churches or still-living oaks. They created a hydrological fingerprint for each of the 147 oaks in total by analyzing the carbon and oxygen isotopes in each individual tree ring of all tree samples. "Since the carbon value depends on photosynthesis and the oxygen value depends on water supply, we were thus able to draw conclusions based on the tree rings as to how dry or wet the respective year was," says Sebastian Wagner, a paleoclimate researcher at Hereon and co-author of the study published in the journal Nature Geoscience. According to the study, the years 40, 590, 950 and 1510 were particularly dry summers, while the years 200, 720 and 1100 were particularly wet summers.

What's most interesting is the long-term trend that can be seen from this data - and it's clear: Summers in Europe have gradually become drier over the past two millennia. "Compared to temperature changes, changes in hydrological events such as precipitation and droughts are far more complex and more difficult to attribute to changes in anthropogenically enhanced greenhouse gas concentrations such as CO2 and methane. However, one indication is the accumulation of these events over central Europe in the last two decades, which has not occurred within the last two millennia," Wagner says. The intensity and duration of the droughts would be difficult to explain without the human-enhanced greenhouse effect. Other events, such as the change in the tilt of the Earth's axis relative to the equatorial plane of the sun, are also insufficient to explain it. In addition, the summers of recent years stand out in particular. "Since 2015, the European summer droughts have been unprecedentedly dry," the authors sum up.

Another conclusion of the study is that this accumulation of unusually dry summers is very likely a result of human-induced climate warming and the accompanying change in the position of the jet stream. That's because, aside from the increase in anthropogenic greenhouse gases over the past 20 to 30 years, no major changes in other climate forcings - influences on the climate system that lead to climate change - have been detected. "Even with the help of climate models, the accumulation, severity and spatial extent of droughts cannot be explained by natural climate forcings," Wagner says.

However, the general public did not become aware of the droughts as early as 2015, but only since 2018. Before that, there was often only talk of drought. "Drought always sounded far away, as in a steppe or desert," says climate researcher Andreas Marx, who is the contact person for the UFZ Drought Monitor at the Helmholtz Centre for Environmental Research (UFZ). Only the personal concern of many allotment gardeners and garden owners, whose lawns dried up despite irrigation, and the lack of fuel at gas stations along the Rhine in late fall 2018, he says, led society to become more attentive. "Since then, perceptions have changed drastically," he says. This has also brought the connections between climate change and drought into focus, he says.

"Of course, global warming is affecting droughts, especially with the increased heat we've seen, particularly in 2018 and 2019. Those were pronounced heat years that drove up evaporation as a result of the high temperatures," he says. In addition, temperature differences between the Arctic and mid-latitudes are decreasing, so the jet stream is no longer swinging north and south as much, but rather moving into a stationary stable zone. As a result, blocking weather patterns such as heat waves that persist for several days or weeks become more pronounced. As a result, low-pressure areas no longer reached Germany, and dry periods lasted longer.

"All of this has noticeably and measurably changed the weather in recent decades," says Andreas Marx. And this spring, drought persists in many places in Germany, right down to deeper soil layers, according to the UFZ Drought Monitor. "Unlike many agricultural crops, wet topsoil alone is not enough for trees. Forests are currently entering their fourth growing season with soils that are too dry overall."