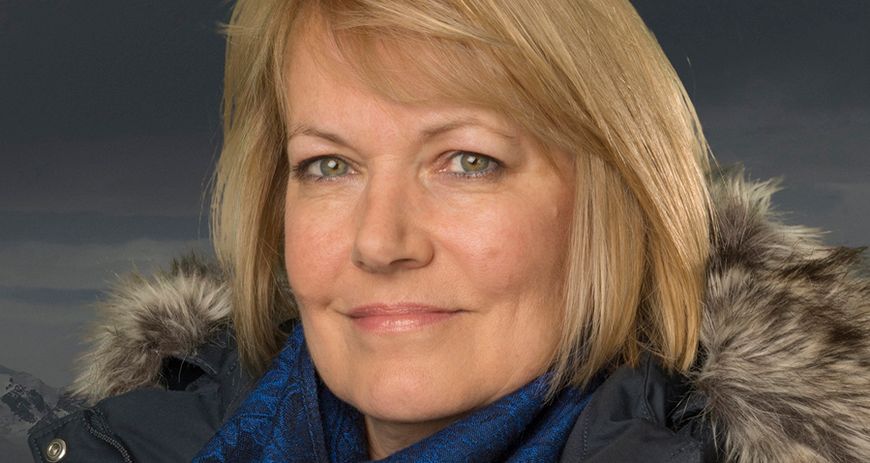 Jane Francis completed her first Antarctic expedition in 1989. Today she is one of the pioneers in polar research. Bild: British Antarctic Survey

A passion for the extreme

Jane Francis is one of Britain’s most famous female polar researchers. She has undertaken numerous Antarctic and Arctic expeditions and, when required, she also explores the Australian desert for traces of its polar past.

“As geologists,” says Jane Francis, “we read rocks from the bottom to the top. The oldest layers are found at the very bottom and we move up through younger and younger layers as we read them one after the other.” A story is then revealed like the pages of a book – “and when I look at such rocks, the ancient landscapes that they represent form in my mind’s eye.” Jane Francis has acquired this gift over many decades spent intensively researching rocks, fossils, and other natural relics from millions of years ago.

The British researcher takes anyone she talks to with her on her expeditions through the pictures she paints with her words and the enthusiasm with which she describes her work, the rugged Antarctic environment, life in a tent, and the beauty of the ice. She has spent many years of her life on the move, principally in the Antarctic, and she considers sharing her experiences a key part of her work: She wants to inspire others with her enthusiasm and use her vivid depictions to focus attention on the need to protect the polar regions, which are currently changing more rapidly than ever before, as evidenced by her studies of the fossil record, drill cores, and rock formations.

“My most recent trip to Antarctica was last year,” she says, “but not as part of an expedition, unfortunately!” Nowadays, she only manages short visits to the British research station, mostly accompanied by visitors from government or research organizations. She has been the Director of the British Antarctic Survey since 2013, and is the first woman to head this distinguished organization in its more than 60-year history. “This role,” she says, “is not compatible with active participation in expeditions, which can easily involve two to three months of field camps.” There is no doubt that her passion lies in field work: her entire office is full of books about expeditions as well as the rocks and fossils she has brought back from her travels to the headquarters of the British Antarctic Survey in Cambridge. And some experiences from her time away also benefit her in her current work, which largely takes place at her desk and in conference rooms: Her life is made much easier by her first-hand insights into Antarctic research.

“The patience you learn out there is also very helpful here on the administrative side.”

Jane Francis was awarded the British title of Dame in 2017, the culmination of her career to date. She grew up on a farm as the eldest of four. “Even back then, I was already interested in fossils and rocks and would collect them,” she recalls. When the time came, it was no surprise that she decided to study geology. She completed her first Antarctic expedition, one of many, in 1989. She also spent five years of her life in Australia. “The rocks I worked on there dated from a period when the Australian landmass was close to the South Pole. So, strictly speaking, I was conducting studies in polar geology – but under completely different circumstances.” She laughs as she recalls the incredibly hot conditions in the Australian deserts. Perhaps she is simply attracted by extremes, she comments with a smile.

“The only thing I can’t stand is high humidity. I wouldn’t be much use as a researcher in a tropical forest.”

And what is she hoping to focus on in her current position as Director of the British Antarctic Survey? She doesn’t need much time to consider her answer: “We want to understand the impact of climate change on the Antarctic and how changes in Antarctica will affect the rest of the world. And we are trying to reduce our carbon footprint there.” Possible ways of achieving this include new forms of energy supply at the research station and more efficient logistics.

When Jane Francis makes it to Antarctica nowadays on one of those brief visits with visitors, she always takes time to go off by herself. When there is nothing to be heard, not a single sound, when the sun shines and the ice glistens, she feels like she is back on expedition again. And sometimes she tells her guests what it’s like when a snowstorm hits: With days of tent confinement, wrapped up to stay warm, you might browse the previous weeks’ research notes, read a book in peace, listen to music, or play cards with your team. These brief opportunities to slow down and relax are something she still benefits from today.

Between September 2019 and February 2020 , Helmholtz's research was evaluated by high-ranking international experts. The strategic evaluation aims to review the strategic plans of the research field and to propose a basis for the distribution of funding among the programs. Jane Francis was chair of the high-caliber panel of international recognized experts.