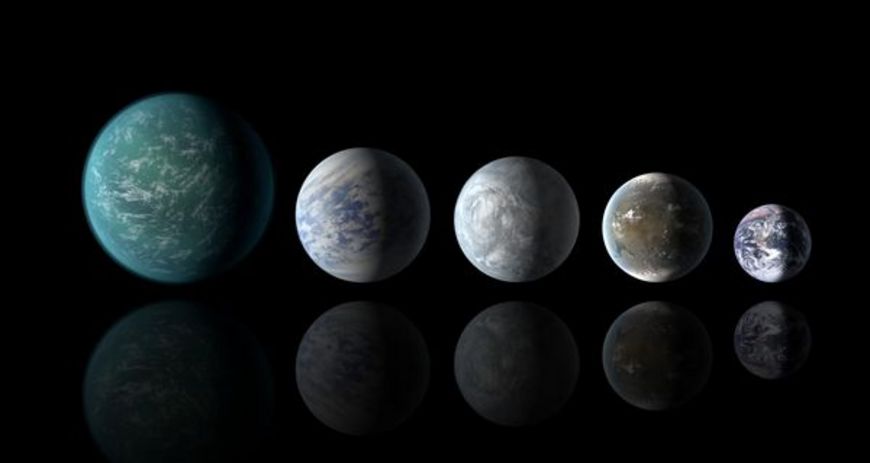 Searching for a Second Earth

DLR scientists have discovered a planetary system that is astoundingly similar to ours. About 2,500 light years from Earth, seven planets orbit around the star KOI-351. The high degree of similarity with our own solar system gives rise to the speculation that there might be life there. Astrophysicist Heike Rauer explains the probability of discovering a second Earth.

"For life – as we know it – to be able to exist, certain conditions have to be in place", explains Heike Rauer, head of the Extrasolar Planets and Atmospheres working group at the DLR Institute of Planetary Research. "Energy must be available, for example, in form of solar radiation, as well as food and liquid water." The verification of these conditions over such a great distance is extremely difficult.

"A first indication of whether life would be possible is provided by a planet's distance to its star", says Rauer. Why? If the distance is very great, the planet's surface is too cold to give life a chance. If the planet is too close to its star, everything burns up. The outermost planet in the newly confirmed 7-planet planetary system orbits KOI-351 at about the same distance as the Earth orbits the Sun: 150 million kilometres. Likewise, the central star's brightness is similar to that of our Sun. "However, the outermost planet is a gas planet similar to Jupiter or Saturn", explains DLR scientist Rauer. "From a scientific point of view, life is unimaginable on this kind of planet." Earth-like rocky planets, such as the ones circling the star KOI-351 on the inner orbits, would be potential candidates, but their surface is too hot. So, no life in spite of the similarities? "We can speculate whether the outermost gas planet has a moon", says Rauer. "On such a moon, we could speculate about life forms." She adds that so far, however, there is no indication for the existence of such a moon.

Therefore, Heike Rauer and her colleagues hope for approval of the PLATO mission by the European Space Agency (ESA). The data that could be provided by this space telescope would make it possible to find also other objects such as moons. "Then, the next step would be to investigate the atmosphere of the found objects", says Rauer. This could result in finding clues regarding the activity of living organisms. Heike Rauer is confident that, in future and with the help of space telescopes and improved measuring technology, the chances of finding objects in the cosmos that are inhabited by lifeforms are very big. This assumption is corroborated by statistical evaluation of data derived from the Kepler space telescope. Statistical projection has revealed that every fifth star in the Milky Way galaxy bearing a resemblance with our Sun features a planet within its habitable zone that is approximately the same size as our Earth. At an estimated number of 100 billion stars bearing resemblance with our Sun, this equals to double-digit billions of Earth-like planets. The question, however, as to whether these planets are actually suitable for the existence of life can only be answered by further space missions.

The term KOI is the abbreviation for 'Kepler Object of Interest', which means this star was observed during the NASA Kepler space telescope mission between 2008 and 2013 and that it was classified as a candidate for the existence of exoplanets. Exoplanet is the scientific term for planets that do not orbit the Sun, but another star. The assumed existence of other planetary systems now was confirmed by the discovery of the altogether seven exoplanets. Three of these planets had been discovered already in recent years. Yet only the development of a special computer algorithm enabled the DLR researchers to identify also the other four planets. Until now, 771 stars with planets have been identified. Only 170 stars are known to be orbited by more than one planet. At present, only a handful of systems with at least five planets have been confirmed.

"Kepler"-Website - Searching for Planets with an Habitable Zone