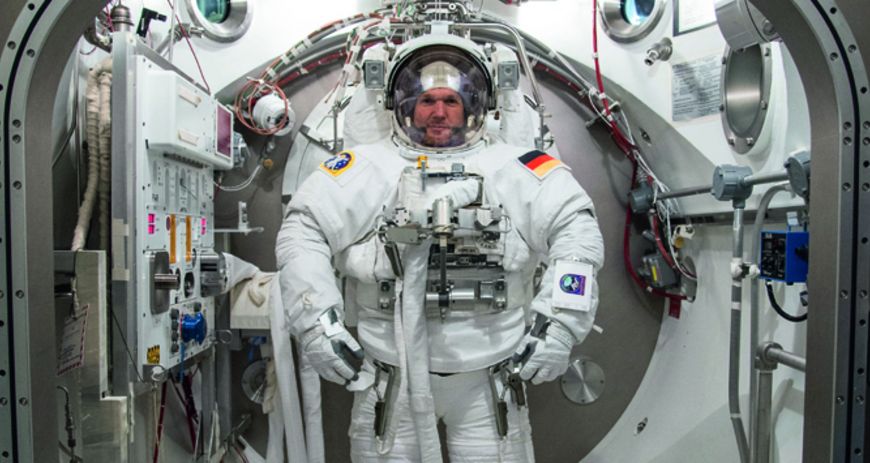 Alexander Gerst at his training for the expedition into the space. Photo: NASA

"The most difficult? Learning Russian!"

On 28 May 2014, Alexander Gerst is scheduled to fly to the International Space Station (ISS) for half a year. Until his space flight, the 38-year old continues his training at the so-called "Star City" near Moscow. An interview about parallels between Antarctica and outer space, researchers' intuition and the difficulty of learning a language

Prior to your astronaut training you were a geophysics researcher in Antarctica. Why do you want to go to outer space now?

I became a scientist because I am fascinated by the unknown. This is also why I decided to study geophysics at what is today the Karlsruhe Institute of Technology. I am so fascinated by outer space because mankind has been able to investigate it on site since only 50 years ago. Compared to the millennia of us humans exploring the Earth's surface, space travel is a young discipline and it is just that novelty that attracts me.

Are there similarities between your work in Antarctica and the sojourn in space?

Both Antarctica and outer space are environments that are hostile to life and that are difficult to reach. And both offer unique opportunities for research. I perceive space travel to have a similar role as polar research had a hundred years ago. Today, Antarctica features many research stations. Society directly benefits from the research insights obtained there, such as regarding climate change. Manned space travel could likewise develop in that direction and some day yield scientific insights that we cannot even fathom as yet. Polar research demonstrates that sometimes we have to go a long distance, to forbidding locations, in order to research connections that happen right on our doorstep.

Many astronauts are trained test pilots, whereas you come from the field of research. In how far are you different compared to your colleagues?

Astronaut is an entirely new profession for all of us, no matter whether we are a scientist or pilot. However, most experiments on ISS can be conducted also by non-scientists. As an astronaut, one is the extended arm of researchers on ground. Given the number of 162 experiments that are scheduled during my mission, 40 of which hailing from Germany alone, it is impossible to be an expert in every field. Many experiments run automatically, others we have to carry out ourselves. There, my scientific intuition could come in handy. We know it from laboratories on Earth: sometimes during an experiment one hits on something by accident that could improve the research. Perhaps I have more of an eye for such things.

You have been training for this mission for more than two years. What was the most difficult thing?

Learning Russian. Compared to that, I found the training for extra-vehicular activity and operating the Soyuz during start and landing simulations easy. Due to my studies at the Karlsruhe Institute of Technology I am also well prepared for the scientific content of the mission. By now, I have learnt sufficient Russian to speak the language even with my American colleague Reid Wiseman during the rocket launch in Baikonur, so that everybody in the Moscow control centre will be able to understand us. The two of us are also often guests of our third team member, Maxim Surajev. We have often visited him and his family during our training periods in Star City near Moscow. This is also where the first human in space, Yuri Gagarin, prepared for his space flight more than 50 years ago.

The ISS space station costs about 100 billion Euro. Space agencies often justify the costs with its usefulness in terms of scientific results. Is it really worth all that tax money?

I think so. The costs are spread over many years and many countries worldwide. Per year, every EU citizen pays about ten Euro for space travel, with about one Euro going to manned space travel. In exchange, we obtain insights that we could not get otherwise, for example, in the field of osteoporosis research and the development of new materials. We are a curious species and have always explored our environment. It is our nature. Moreover, space travel provides a unique point of view: the atmosphere is an incredibly thin protective layer, which becomes evident at first glance from up there. The Earth is the space ship for all of us and we only have one. So we should treat it well!

What does that mean for your own role as astronaut?

I want to further disseminate this special view both from outer space and after my return. By the way, space travel is beneficial also for the understanding among nations, because it can be realised only by international effort. Even in politically unstable times, the space travelling nations stick together.

Would you fly also to the Moon or to Mars, undertaking the latter trip possibly even on a one way ticket?

Of course I would be game for a mission to the Moon or to Mars. Flying to Mars would be the greatest adventure of mankind and technically we are almost ready. It now is up to society to make that decision. However, I disapprove of a one way ticket for the simple reason that one can fulfil the role of ambassador I described earlier only after returning to Earth.

The International Space Station ISS flies at a speed of nearly 28,000 kilometres per hour at an altitude of about 400 kilometres above the Earth. The reason for zero gravity on board is not the altitude but the great speed. One circumnavigation of the Earth takes about 90 minutes, which is why the Sun sets 16 times per day on board. Including the large solar panels, the ISS roughly covers the expanse of a football field. Usually, six people work aboard the station. It is funded by the USA, Russia, Europe, Canada and Japan. Within the European Space Agency ESA, the German government interests are represented by the German Aerospace Center (DLR), a member of the Helmholtz Association. China is currently planning its own space station.

Research on board the ISS

Research on board the ISS mainly focuses on the fields of astronomy, physics, material research, biology, human medicine and earth observation. Many experiments run automatically in experiment racks. Since 2008, Europe's research laboratory "Columbus" has been available for the same purpose; it was largely built in Bremen. Since the ISS features almost zero gravity on board, experiments where gravity in an earthbound laboratory would interfere are possible here. The results are transmitted to the Columbus control centre at the DLR in Oberpfaffenhofen.