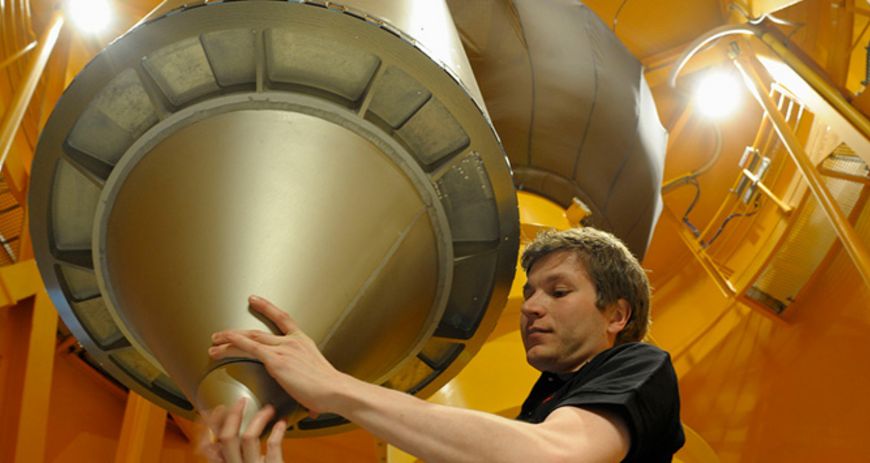 The Coldest Place in the Universe

Actually, it is not out there somewhere among the innumerable heavenly bodies of outer space – the coldest place in the universe is right here in research laboratories on Earth.

Scientists love records just as much as anyone else. Low-temperature physicists and space research scientists smile when the coldest location in Germany is mentioned: Funtensee in Berchtesgaden National Park at -45.8 °C. But this is nothing compared to the coldest inhabited settlement on the planet, i.e. Oimjakon, which is located in Siberia and holds the record with -67.8 °C. From a physicist’s point of view, this is quite impressive. And the coldest place that has ever been recorded on earth can be found at a mountain ridge near Dome A (Dome Argus ) in the East Antarctic. A temperature of -93.2 °C (-130 °F) was measured there in 2010. In outer space, temperatures of about -270 °C (−454 °F) typically prevail. But where is the coldest place in the universe? This can be found in research laboratories on earth, such as the German Aerospace Center (DLR) of the Helmholtz Association.

How is that possible?

The physical laws that we are currently aware of allow us to describe the development of our universe – starting from a miniscule fraction of a second after the “big bang”. Initially, heretofore unimaginably high temperatures prevailed. These temperatures however sank as the universe expanded – until the present time in which they are approximately -270 °C. Expansion of space also stretched the wave-length of electromagnetic radiation up to the microwave range between 1 metre and one millimetre. In outer space, heat – as we can observe daily from our stovetop as well as from the formation of clouds – can be transmitted neither through conduction nor convection, since the vacuum in space hardly contains enough “particles” to make this transmission of heat possible. Heat transmission in space is possible exclusively by means of radiation with emission and absorption. This is, of course, also possible on Earth – a well-known example is the microwave. The constant expansion of space is continuously “thinning out” the heating effect of electromagnetic radiation – similar to a rubber band that gets thinner and thinner when stretched.

Could there possibly be locations in the universe where it is lower than -270 °C? The answer is yes, when that location is shielded and actively cooled. And this is what scientists have accomplished with the aid of the Herschel European Infrared Observatory.

Yes, it is strange. Space scientists have to make specific locations in space colder in order to be able to precisely measure residual heat left over from the Big Bang. For this purpose, scientists have brought the terrestrial technology of low temperature physics into outer space. Space probes such as the Hubble Space Telescope and the Rosetta Mission perform the best between roughly –20 and + 50 °C.  To achieve this, special thermal-control systems are on board, and these probe systems operate in visible light.

The situation is selectively different for space telescopes in the infrared range. For them, it cannot be cold enough in the light spectrum which is invisible for human beings. Any form of radiation from internal heat distorts the measured results from the sensors. And the ultimate goal is to create an interference-free “heat map” of the universe that is as interference free as possible, and preferably covers all cold regions.

This is why the space telescope Herschel, with its main mirror measuring three and one half metres, was equipped with a large, insulated thermal shield facing the sun and Earth. In addition, the telescope was actively cooled down to almost 271 degrees Celsius by means of slow evaporation of more than 2,000 litres of liquid helium. This principle was terrestrial, and had been technically tested. It functioned similar to the evaporation-based cooling mechanism of a refrigerator in that the surplus heat was emitted out into space by means of radiators. This technology enabled Herschel to penetrate interstellar dust clouds, to align its focus on distant cosmic regions, and to allow research scientists to make new discoveries concerning the origin of galaxies and stars.  DLR Space Management financed the mission, i.e. the science for the mission.

Absolute zero, the lowest theoretical temperature possible, is about three degrees lower than the temperature of outer space, specifically, -273.15 degrees Celsius. This lowest temperature has almost been achieved – within just a few millionths of one degree – in the laboratories of low-temperature physicists. By using a helium gas mixture of 3 He and 4 He, a few dozen laboratories in Germany have been able to reach temperatures down to about 1 milli-Kelvin, i.e. approximately one thousandth degree Celsius away from absolute zero. The Walther-Meißner-Institute for Low Temperature Research in Garching for example, is examining the characteristics of super-conductive quantum circuits made of niobium and aluminium at these extreme temperatures.

But there are only a few locations worldwide where scientists are so close to absolute zero as in Bremen. The drop tower there is operated by the Center of Applied Space Technology and Microgravity (ZARM). The scientists catapult “refrigerators” up in the 120 metre tower and let them fall 120 metres. The researchers enclose atomic clouds in their “refrigerator” by means of a special procedure, and use magnet traps to “grab” the atomic clouds and laser light for cooling. The research scientists are thus able to produce temperatures in this DLR joint project that are only one millionth degree Celsius (nano-Kelvin) away from absolute zero.

What does cold have to do with driving?

The Quantus Team’s goal is to evaluate the Einstein theory of relativity using high-precision measurements, which states that all particles in a free-fall state move at the same speed. Additionally, they are examining and comparing Einstein-Bose atomic clouds (extreme aggregate condition) during the free-fall in the vacuum. The scientists irradiate controlled laser light during this short period of time from all spatial directions, in order to decelerate proper motion of all atoms in the cloud (Doppler Effect).  The medium velocity decreases and the gas becomes colder. The intense cold in turn decelerates the expansion of the atomic clouds, thus enabling measurements with very high precision. “Due to the approximately 9.3 seconds of weightlessness, our experiments in the drop tower are quite promising. Presumably in the spring of 2016, we will start the first of three planned research rockets, in order to obtain a longer time span in weightlessness”, says Dr. Rainer Forke from the DLR Space Management.

The research scientists’ long-term goal is to execute these measurements in satellites, since the longer weightlessness is sustained, the more precise the measurement results will be. In the end, the real issue here is terrestrial things. “In order to clarify fundamental questions in physics, we need high-performance measuring instruments with great precision. This has practical repercussions. The more precisely we can determine – for example – length, time and frequency, the better subsequent satellite navigation will be, which of course already has numerous applications today. Highly precise satellite navigation is a crucial prerequisite for the planned driverless cars and trucks”, explains Dr. Rainer Forke.

It’s not necessary to take a holiday to Funtensee, Oimjakon or to the mountain landscape of the Dome Argus  in the East Antarctic. Specifically, in the medical sector we can encounter record-breaking sub-zero temperatures in everyday life as well. For instance, the cold chamber at the Immanuel-Krankenhaus in Berlin is available to all patients with inflammatory disorders of the joints, as well as athletes who require regeneration. However, this therapeutic application ensues no longer than two and a half minutes at a temperature of minus 110 degrees. The temperatures are even colder for investigations involving nuclear magnetic resonance tomography. If the device works with a super-conductive magnet, temperatures of about 4.2 Kelvin, i.e. -269 °C, can prevail – well-shielded in the direct vicinity of the patient. It doesn’t get much colder than that – even in outer space.